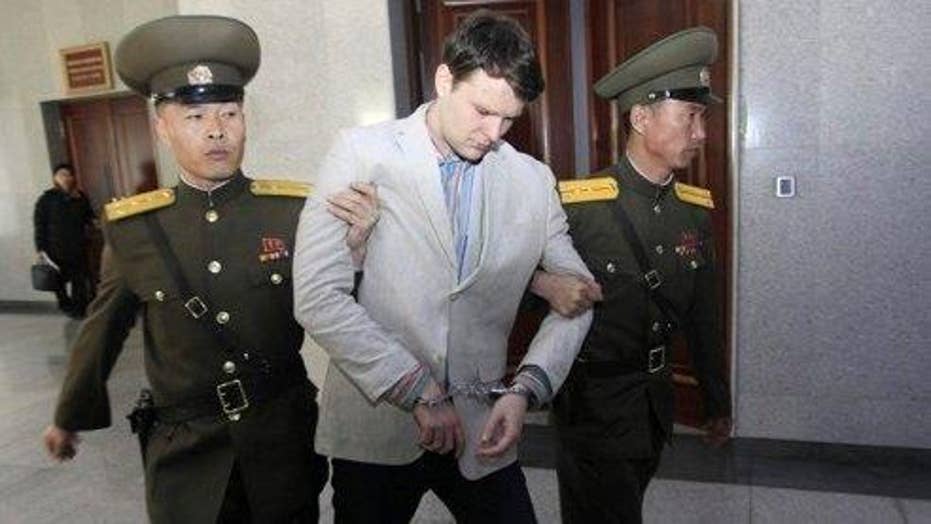 How will US respond to the death of Otto Warmbier?

North Korea has taken the life of an innocent American—and there must be clear consequences for their barbaric actions. If not, North Korea will only assume their actions are acceptable.

Otto Warmbier, the 22-year-old college student who was held by Pyongyang before being returned to the U.S. earlier this month, died Monday.

His family, victims of Pyongyang’s brutality every bit as much as Otto, explained in a statement that, “when Otto returned to Cincinnati late on June 13th he was unable to speak, unable to see and unable to react to verbal commands. He looked very uncomfortable — almost anguished.”

The statement went on, noting that, “although we would never hear his voice again, within a day the countenance of his face changed — he was at peace.  He was home and we believe he could sense that.”

As much of a tragedy as this, how can we be shocked anymore? North Korea, through this senseless act of what can only be described as terrorism—not revealing the extent of the young man’s condition until he was practically on U.S. soil—is nothing new for the so-called hermit kingdom.

With hundreds of thousands of people in prison camps, a large section of its population on the verge of starvation and a cult of personality akin to Stalin or Hitler, North Korea is the ultimate rogue state—now armed with deadly missiles that can carry chemical, biological and now nuclear weapons that will soon be able to hit the U.S. homeland.

President Trump should declare talks with North Korea—which have seemed possible at different points in the recent past—are off the table, indefinitely. Washington will not, and cannot, try and achieve a diplomatic breakthrough with a nation that kills our own people.

The death of Otto Warmbier can only serve as a warning to the Trump Administration that it must act to not only ensure this never happens again, but that Washington pushes back against the evils of a regime that will do anything to hold on to power.

First, President Trump should submit a bill to Congress, call it the Otto Warmbier act, to make sure that never again will innocent Americans be used for the propaganda machine of Kim Jong Un. In the bill, he should codify that no U.S. citizen should be allowed to travel to North Korea--under any circumstances whatsoever. President Trump could work with Congressman Joe Wilson of South Carolina, who has also proposed a similar idea. Here, the president can send a powerful message that we will not be allow North Korea to use any means necessary to gain leverage over us—including our own citizens who come in peace to visit their country and many times for humanitarian reasons.

Second, the president should demand the immediate release of all other Americans that are still trapped in North Korea. There is no reason that Pyongyang should be holding innocent civilians for any reason from any country as a propaganda ploy. President Trump should declare that if such Americans are not returned right now, and unharmed, all options would be on the table—from the toughest of possible unilateral sanctions, to increased missile defense platforms in the seas or possibly to Japan and that truly “all options are on the table.”

Third, it is time Washington go to Beijing—telling China unequivocally it must now use all of its diplomatic and economic muscle to reign in its rogue ally. The time for statements and talk are over. Beijing must begin to put in serious work to not only help the international community rein in North Korea, but show clear pathways on how it can achieve such shared goals.

Finally, President Trump should declare talks with North Korea—which have seemed possible at different points in the recent past—are off the table, indefinitely. Washington will not, and cannot, try and achieve a diplomatic breakthrough with a nation that kills our own people. The Trump Administration should send a clear signal, explaining that until North Korea gives a full and accurate accounting of what happened to Otto Warmbier, they will be sitting alone at the negotiating table.

The Trump Administration has been proven time and time again that it made the right choice to tackle North Korea as its number one foreign policy priority. While many past administrations have decided to kick the can down the road, Pyongyang’s latest vile act must not go unchallenged.

Through concrete action the administration can indeed impact Kim’s strategic calculus and show that Washington and its allies mean business. If not, what is to stop North Korea from committing more acts of violence against Americans or our allies in the future?

Clearly the time for action is now.