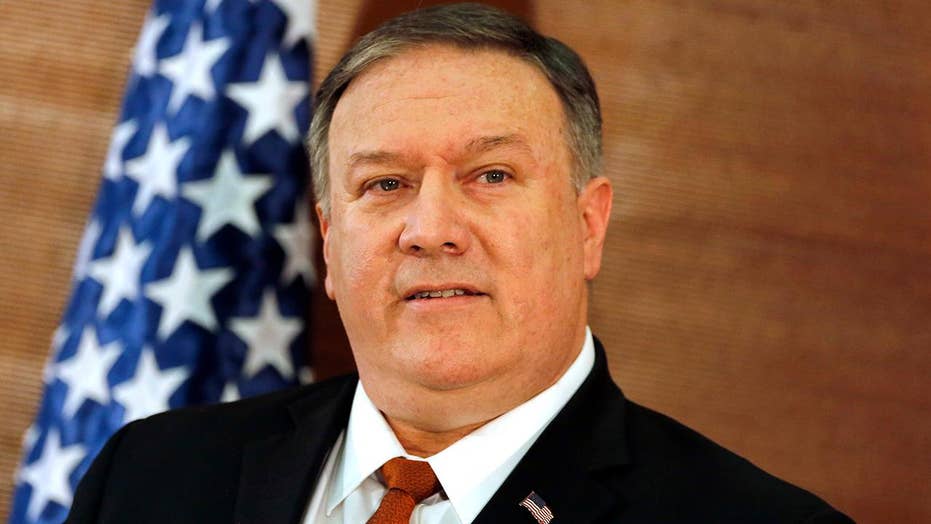 In a stunning but essential rebuke of former President Barack Obama and his legacy of weakness and failure abroad, Pompeo declared, “The age of self-inflicted American shame is over.”

If that wasn’t clear enough, Pompeo said, “Now comes the real new beginning” – a jibe at the speech Obama gave in Cairo early in 2009, in which he essentially apologized for American Middle East policy going back decades in remarks titled “A New Beginning.”

Pompeo’s view is unequivocal and crystal clear: “America is a force for good in the Middle East.” He didn’t even add the usual qualifiers about our historic imperfections. Expect our adversaries abroad and snowflakes at home to be mighty upset at this moral clarity and self-confidence from the greatest, freest country on Earth. Our real allies will love it.

First, Pompeo made it clear that the chief focus of U.S. policy in the Middle East is thwarting Iran’s dangerous and tyrannical ambitions. While violent jihadist groups like ISIS and Al Qaeda still exist and deserve our attention, they are now a lesser threat. Also, by condemning Obama’s decision to do nothing in 2009 and 2010 when Iranians took to the streets to protest their oppressive regime, Pompeo opened the door to supporting Iran’s internal opposition.

Second, Pompeo specifically called out “radical Islamism” and condemned Obama for not doing so. This is a refinement and extension of President Trump’s condemnation of “radical Islamic terrorism,” which is the tactic that Islamists use when they go violent.

In contrast to failed efforts to either spread American democracy or apologize for it, this means we can rally all of those opposed to radical Islamism, including monarchies and imperfect republics across the Middle East that oppose Islamist theocracy. It means we can be clear about opposing not only terrorists like Al Qaeda, but Islamist political groups like the Muslim Brotherhood.

Third, Pompeo outlined the Trump administration’s rigorous efforts at diplomacy across the Middle East, which have contributed to radical change and unprecedented cooperation. Pompeo disclosed that “Egypt, Oman, Kuwait and Jordan have all been instrumental in thwarting Iran’s efforts to evade sanctions,” and lauded assistance from Saudi Arabia and the United Arab Emirates (UAE).

He added that “private companies in France, Germany, Britain and elsewhere have calculated that enriching themselves through work with the regime is bad for business” – a gentle and much-deserved slap at the governments of those fading allies  that have actively opposed getting tough on Iran.

Pompeo reminded the audience that last year, “the Israeli national anthem played as an Israeli judo champion was crowned the winner of a tournament in the UAE.” This story and scores like it have been missed by our mainstream media. American strength and moral clarity and fear about the threat from Iran are dissolving old animosities and creating new alliances. We may actually see new Arab embassies in Israel.

Finally but crucially, Pompeo included a cautionary principle regarding what the U.S. is willing to do in the Middle East. Remarking about U.S. support he said: “But ‘assist’ is the key word. We ask every peace-loving nation of the Middle East to shoulder new responsibilities for defeating Islamist extremism.”

This is the fundamental essence of "America First." We will not apologize for America, we will stand up for our interests, and we will cooperate with our allies as long as they are willing to share the burden of preserving freedom.

Adding an additional touch of pragmatism, Pompeo condemned the Syrian tyrant Bashar Assad, but cracked open the door to aiding postwar reconstruction if Assad kicks the Iranian military out of Syria.

More abstractly, Pompeo’s speech is a signal that the Trump administration is coming up to full steam in implementing the foreign policy for which Trump won support in the 2016 election. Pompeo’s speech on the Middle East goes hand-in-hand with one that Vice President Mike Pence delivered last fall about the critical threat we face from China.

There is still much to do to turn speeches and strategic frameworks into concrete implementation steps. But Pompeo’s speech shows a firm resolution to continuing doing just that. Trump and his lieutenants will not stop, for example, at withdrawing from the Iran nuclear deal in order to improve the Middle East, or at implementing tariffs on China in order to begin ameliorating that economic and military threat.

"America First" means rallying our effective allies and putting our adversaries on the defensive.