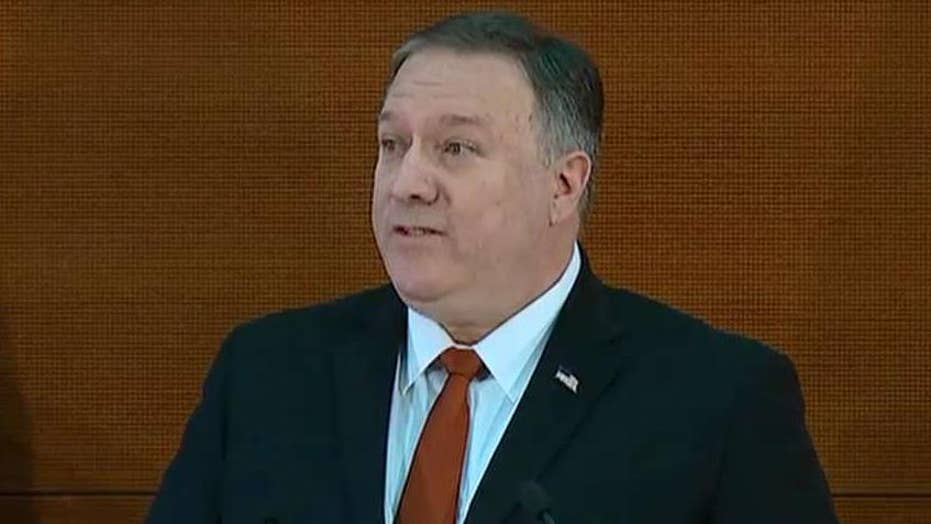 In a major foreign policy speech at Cairo University, Pompeo called out the former president for his engagement with Iran and laid out the Trump administration's vision for countering Iranian influence; Trey Yingst reports from Jerusalem.

We’re just back from a trip to Egypt, and we’re glad Secretary of State Mike Pompeo met there Thursday with President Abdel Fattah el-Sissi and spoke at American University in Cairo about the important role America can play as a force for good in the Middle East.

The Trump administration recognizes that el-Sissi is a friend of the United States and should be treated as such. But unfortunately, he has been unfairly demonized in much of the U.S. media and by the left.

We traveled to Egypt to see el-Sissi inaugurate the largest church in the Middle East on Sunday – a cathedral for the Coptic Orthodox Church – just outside Cairo. On the same day, the Egyptian president opened one of the region’s largest mosques, emphasizing his efforts to encourage Muslims and Christians to live together in peace and harmony.

Some 10 to 15 million of Egypt’s roughly 100 million people are Christians. Almost everyone else in the country is a Muslim.

The Egyptian president’s actions on each of these three fronts have been courageous, substantive and increasingly effective. The American people should understand that that where once a group of dangerous fanatics ruled Egypt, we now have a great friend and faithful ally in Egypt.

Pompeo made clear in his remarks at American University that he understands that radical Islamists – like the Muslim Brotherhood, ISIS and the rulers of Iran – continue to support terrorism and promote enmity between religions.

Criticizing the Obama administration, Pompeo said that in the past the United States “grossly underestimated the tenacity and viciousness of radical Islamism, a debauched strain of the faith that seeks to upend every other form of worship or governance. ISIS drove to the outskirts of Baghdad as America hesitated. They raped and pillaged and murdered tens of thousands of innocents. They birthed a caliphate across Syria and Iraq and launched terror attacks that killed all across continents.”

In contrast, Pompeo said that “the United States under President Trump has reasserted its traditional role as a force for good in this region…. Under new leadership, America has confronted the ugly reality of radical Islamism. On President Trump’s very first trip abroad to this region, he called on Muslim-majority nations to … ‘meet history’s great test – to conquer extremism and vanquish the forces of terrorism.’”

As the leader of the Arab world’s most populous nation, el-Sissi is charting a path toward modernity and tolerance that is giving great hope to Egypt’s religious minorities, which have too often been subject to discrimination and attacks by extremists.

The idea for building the Coptic Orthodox cathedral he opened on Sunday was actually el-Sissi’s to begin with.

In the aftermath of the so-called Arab Spring and the horrific terrorist attacks by Islamists targeting vulnerable Christian communities, the Egyptian president responded in 2015 by increasing security around Christian houses of worship.

And el-Sissi did something of great symbolic importance that no other Egyptian leader had done before him – he attended a Christmas Eve service in Cairo alongside the Coptic Orthodox pope.

Keep in mind that the Muslim Brotherhood extremists who briefly ran Egypt (and were in the process of running it into the ground) regularly issued religious decrees declaring it immoral for Muslims to even wish Christians a Merry Christmas. So it was a profound statement for el-Sissi – a pious Muslim – to stand with the Coptic Orthodox pope in solidarity as a fellow Egyptian.

Yet this was just the beginning. El-Sissi also promised when he came to power that his government would rebuild every single church damaged or destroyed by the extremists – a promise he has kept.

Just stop and think about this: the most radical of the Islamists wanted to eradicate Christianity from the Middle East, something ISIS openly stated when its members notoriously beheaded 21 Egyptian Coptic Christians in Libya in 2015.

El-Sissi, in turn, responded to these threats by building the biggest church that anyone had ever seen in the region, and then giving it as a gift to the Christians of Egypt – and doing so the eve of Coptic Orthodox Christmas last weekend.

The inauguration of the Nativity of the Christ Cathedral was broadcast live on national television throughout Egypt. Standing at President el-Sissi’s side were the Coptic Orthodox pope and the grand imam of the world’s most iconic Islamic institution of higher learning, Al-Azhar University. We were fortunate to attend as hosts of a delegation of American evangelical leaders.

Moments before the opening of the cathedral, the grand imam, standing alongside of the pope and the president, told the entire nation of Egypt on live television that Islamic law actually teaches that Christian and Jewish houses of worship should be given the same treatment as mosques. He then wished el-Sissi and the Coptic pope a Merry Christmas.

It reminded us of the words written many centuries ago in a document accepted as authoritative by nearly all the Muslims in the world, “The Covenant Between the Prophet and the Christian World.”

That document says that “if Christians seek the help and assistance of Muslims in order to repair their churches or convents or to arrange matters pertaining to their affairs and religion, Muslims must help and support them.”

The opening of the cathedral in Egypt is one of many such actions taken by the Egyptian president.

Consider the fact that in the past 150 years only 2,500 churches were ever legally authorized to operate by the Egyptian government. Yet in the past 18 months alone, under a new church building law signed by el-Sissi, more than 500 new churches have been granted permits to operate.

What’s more, an additional 5,000 churches have been granted permission to lawfully hold worship services while they go through the permitting process.

Our delegation this past week met at length with some three dozen senior Egyptian Christian leaders, Coptic and Protestant. They all readily acknowledged that many challenges remain to be solved in their country. But to a person they spoke of their deep admiration for and appreciation of President el-Sissi.

The church leaders and the Christians they shepherd feel safer from the extremists as a result of el-Sissi’s policies. They see their religious freedoms being defended and advanced. They see a spirit of tolerance and peaceful coexistence being modeled from the top.

Egyptian Christians see in President el-Sissi a leader of bold and decisive action who is also a friend of the regions’ Christians precisely because he is such a pious Muslim.

The Rev. Johnnie Moore is the president of The Congress of Christian Leaders and a commissioner on the United States Commission for International Religious Freedom.