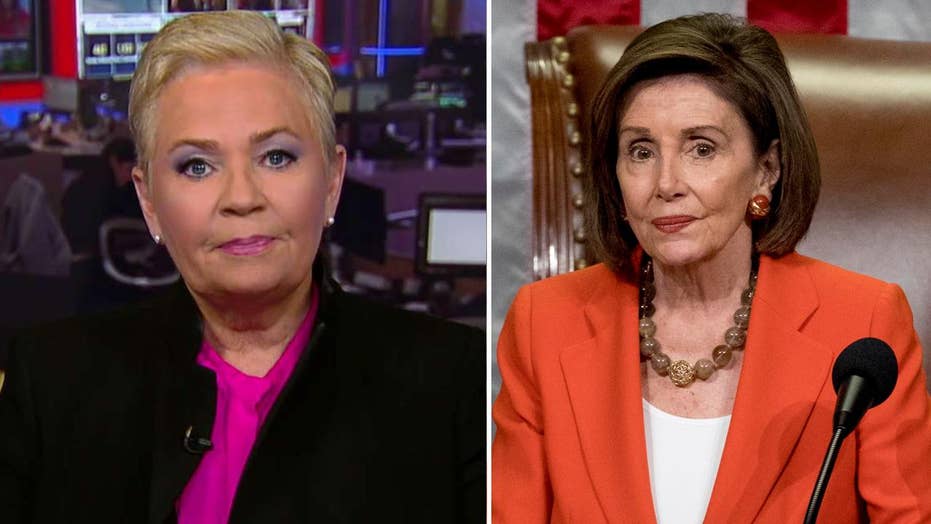 Democratic strategist Mary Anne Marsh explains why President Trump and his Republican allies should not underestimate Speaker of the House Nancy Pelosi.

Following 10 busy days that included leading a bipartisan delegation to the Mideast in the wake of the U.S. withdrawal from Syria, an unannounced trip to meet Afghanistan’s president and visit U.S. commanders and troops there, and delivering back-to-back eulogies for her brother Thomas D’Allessandro and beloved colleague Elijah Cummings, Nancy Pelosi moved with military precision to deliver the votes for the impeachment inquiry of Donald Trump.

Thursday morning, the day of the House vote, Kellyanne Conway told Fox News  “Impeachment is simple math, you either have the votes or you don't. And guess what – dirty little secret – they don't have the votes," she said.

A few hours later, standing next to an image of the American flag on the House floor, House Speaker Pelosi made the case for proceeding with an impeachment inquiry:

“These actions, this process, these open hearings, seeking the truth and making it available to the American people, will inform Congress on the very difficult decisions we will have to make in the future as to whether to impeach the president.

“That decision has not been made. That's what the inquiry will investigate and then we can make the decision, based on the truth. I don't know why the Republicans are afraid of the truth. Every member should support allowing the American people to hear the facts for themselves.  This – that is really what this vote is about. It is about the truth.

When Pelosi concluded her speech, she ascended the rostrum, took the gavel, and presided over the House vote to initiate an impeachment inquiry. It passed 232-196.

Clearly, Nancy Pelosi had the votes.

The recent picture of Pelosi standing up to Trump in the White House is the perfect symbol of how she is handling impeachment. In command and in control, Pelosi is orchestrating every detail of the impeachment process to hold Trump accountable since the disclosure of his call to Ukraine’s president to discuss withholding military funds and the investigation of his political rival Joe Biden.

From beginning the process in the Intelligence Committee under Rep. Adam Schiff, to conducting interviews and gathering testimony of key witnesses, to the timing of Thursday’s vote, and then selling the vote in a series of high-profile interviews while her colleagues joined her across the country using the same message, Pelosi’s fingerprints are on every detail.

Pelosi knows that the more Americans learn about Trump’s actions the more they will support impeachment and removal.

In addition, Pelosi has surgically removed every reason Republicans’ have offered to oppose the inquiry. Their cries about the process, closed hearings, and lack of a full House vote have all been eliminated.

Now, Republicans are left to argue what Trump’s intent was in making the call to President Volodymyr Zelensky. That seems clear enough. Attempting to solicit information about Biden would clearly benefit the Trump campaign, and it is illegal to solicit, accept or receive assistance from any foreign government for any U.S. election.

This is all the result of Pelosi’s methodical, disciplined approach to the inquiry. She knows that the more Americans learn about Trump’s actions the more they will support impeachment and removal. Now, more evidence will be made public in a series of high-profile hearings that could show Trump’s conduct is an abuse of power, betrayal of our national security, and corruption of our elections. All of which would add up to betraying his oath of office and our Constitution, as well as jeopardizing our national security.

When Pelosi sets her sights on something she will not be denied.

Last January, Pelosi was scheduled to lead a delegation to Afghanistan. At the last minute, Trump revoked her delegation’s access to a military plane. It was political payback for her suggestion that he postpone the State of the Union until the government shutdown was over.

Ten months later, Pelosi and a bipartisan congressional delegation landed in Afghanistan. And 10 days later she presided over the vote to start an impeachment inquiry of Trump.

At this point, Trump should have learned that every time he tries to thwart Pelosi she calls his bluff and prevails.