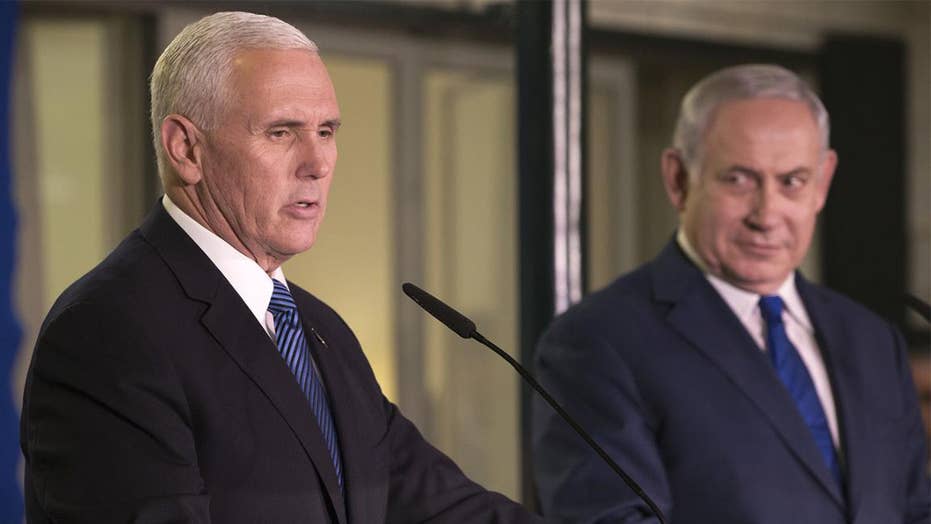 In an address to the Israeli parliament, Vice President Mike Pence defended the controversial decision to move the embassy from Tel Aviv and recognize Jerusalem as Israel’s capital, which has been condemned by the Palestinians and their Arab allies. Pence announced that the U.S. embassy in Jerusalem will now open next year, ahead of schedule.

Vice President Mike Pence’s visit to Israel this week, including a well-received speech to Israel’s parliament in Jerusalem – now recognized by the U.S. as the Jewish state’s capital – marked another missed opportunity for Palestinians to seek better lives for their people.

In a fit of pique over U.S. recognition of Jerusalem and American criticism of Palestinian support for terrorism, Palestinian officials refused to meet with Pence to discuss peace with Israel, U.S. aid, human rights or any other topic. It was their loss and an unwise move.

Palestinian Authority President Mahmoud Abbas went so far as to travel to Brussels to meet with European Union officials to avoid the U.S. vice president. Palestinians staged a general strike in protest of Pence’s visit.

All this came on top of the announcement by the Palestine Liberation Organization earlier this month that it was suspending recognition of Israel and would support the Boycott Divestment and Sanctions (BDS) movement against Israel.

BDS urges individuals, businesses, organizations and nations around the world to end investment, trade, cultural and academic ties with Israel. The movement seeks to strangle Israel economically, isolate it from the world as an international pariah, and ultimately end its status as a Jewish state.

By boycotting the Pence visit and denouncing President Trump for his action recognizing the fact that Jerusalem is the capital of Israel, leaders of the Palestinians are letting their intense hatred of Israel and Jews drive their actions, instead of acting to help the Palestinian people build better lives.

In fact, the BDS movement and the anti-Israel policies embraced by the Palestinian Authority, the terrorist Hamas rulers of Gaza and other hate-filled Palestinian groups actually do more harm to Palestinians than Israelis.

Why? Because BDS denies Palestinians living in the West Bank and Gaza opportunities to improve their lives and increase their incomes by working in and doing business with Israel.

The BDS movement, which is run largely by non-Palestinians outside of the disputed territories, has also done serious harm to Palestinians and made it difficult for Jews and Arabs to work together and build positive relationships.

A notable example of how BDS harms Palestinians is the case of the company SodaStream, which was targeted because of its factory adjacent to the “settlement” of Ma’ale Adumim in the West Bank. This is a city of roughly 40,000 people, 10 minutes from Jerusalem, which even the Palestinians acknowledge will be part of Israel if a Palestinian state is created.

The company was the largest employer of Palestinians in the territories, with nearly 600 workers who received the same salary, medical insurance and working conditions as the other workers.

BDS activists protested outside stores around the world that sold SodaStream products. As a result of financial losses – partly due to the BDS attacks, but mostly a result of the U.S. market moving away from sugary drinks – SodaStream closed the West Bank factory and replaced it with one in the Negev Desert in southern Israel.

Ali Jafar, a shift manager from a West Bank village who had worked for SodaStream for two years, said: “All the people who wanted to close (SodaStream’s West Bank factory) are mistaken ... they didn’t take into consideration the families” of workers.

Only 36 Palestinians who worked at the SodaStream plant in the West Bank were initially rehired to work in the new facility in Israel.

Bassam Eid, a Palestinian human rights activist, met with some of the people who lost their jobs, which paid more than three times what they could earn in the West Bank. He said these Palestinians “are deep in debt because they have taken on long-term commitments based on the understanding that their work at the plant would continue; but reality has slapped them in the face because of the pressure created by BDS movement…. Do you think the boycott movement cares about them at all?”

In May it was reported that all employees of the SodaStream factory who wanted their jobs back were rehired at the new facility in Israel. Altogether, 74 Palestinian workers were rehired – quite a drop from the 600 who had worked in the West Bank factory.

According to the World Bank, unemployment in the West Bank in 2016 stood at around 18 percent. Is it any wonder that some 100,000 to 110,000 Palestinians currently ignore the call to boycott and instead work in Israel?

In addition, while Palestinians and their supporters incessantly rail against Jewish settlements, approximately 30,000 Palestinians work in these West Bank communities. Palestinian workers typically enjoy the same benefits and protections as Israeli workers and earn salaries considerably higher than those available in areas controlled by the Palestinian Authority.

In 2016, the Palestinian Bureau of Statistics reported the minimum wage in Israel was double the average in the West Bank and more than triple that in Gaza.

Besides hurting Palestinians, the BDS movement has been a complete failure. Israel’s policies toward the Palestinians have not changed, its global economic relations are expanding, and Israel has diplomatic ties with more countries than ever.

Moreover, the boycott campaign has generated a backlash with large amounts of money being spent to fight BDS and various legal measures being adopted to discourage and prevent boycotts against Israel.

When Barack Obama was elected as president of the United States, Israeli Prime Minister Benjamin Netanyahu advocated pursuing “economic peace” with the Palestinians. He may have had a partner in his Palestinian counterpart, Salam Fayyad, who was also more interested in improving Palestinian welfare than ideology.

President Obama, however, decided to pursue his own approach, which alienated both Israelis and Palestinians, and led to eight years of counterproductive diplomatic initiatives.

The Palestinians would have more jobs and their economy would be stronger if their leaders worked with Israel on mutually beneficial projects to attract Israeli businesses and create jobs on the West Bank. Their advocates should be encouraging investment rather than boycotts.

Sadly, Palestinian leaders and supporters outside the Middle East believe their political cause is better served if the Palestinian people can be made to suffer so they can be portrayed as victims. That approach has achieved no political victories and only prolonged the Palestinians’ misery.