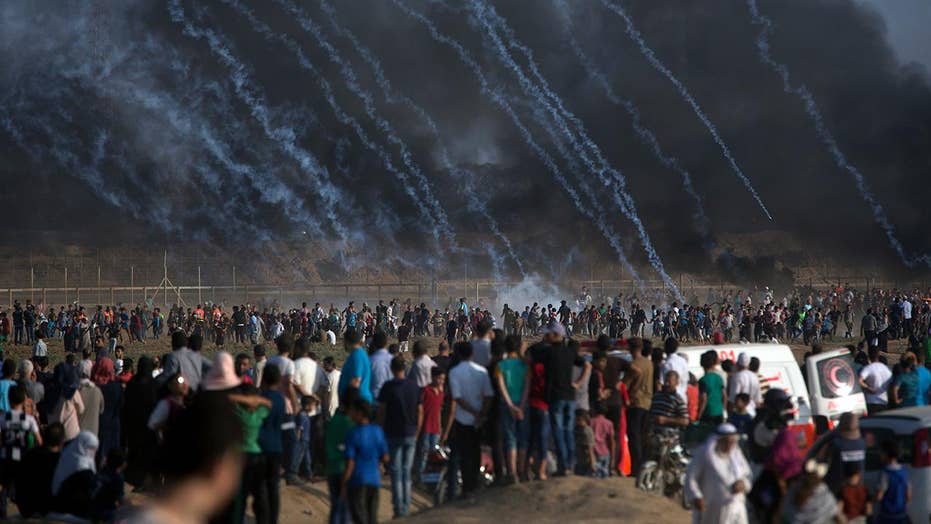 As many as 25 protesters have been wounded along the Israel-Gaza border amid reports of a possible truce with Hamas. David Lee Miller reports.

When President George W. Bush sent U.S. troops into Afghanistan to attack Taliban and Al Qaeda forces following the Sept. 11, 2001 terrorist attacks on the U.S. homeland, nations around the world lined up in support of America – as they should have.

When Israel is attacked by Palestinian terrorists from Hamas and other groups, many nations and the United Nations line up solidly against the Jewish state for daring to defend itself. No matter how much care Israel takes to prevent civilian casualties when it retaliates against terrorist attacks, it receives automatic condemnations and complaints that it has used “disproportionate” force.

As sure as the sun will set tonight and rise in the morning, you can bet that a majority of U.N. General Assembly members will heartily endorse any anti-Israel resolution that comes to a vote. Only America’s Security Council veto – along with the support of a few other Security Council members at times – has protected Israel from some of the worst of the U.N. resolutions.

Thankfully, terrorists have never succeeded in staging coordinated attacks in Israel as horrific as the Sept. 11 attacks that killed nearly 3,000 people and injured more than 6,000 others in New York City, at the Pentagon and in a field in Pennsylvania. But the only reason this hasn’t happened is because Israel has thwarted countless attacks and taken necessary defensive measures.

Terrorists dream of staging their own 9/11 on Israeli soil. Even without a mega-terrorist event, one study estimates that 3,705 Israelis have been killed and 14,736 injured by Palestinian terrorists since the founding of the small Jewish state. Nothing would make terrorists happier than to celebrate the deaths of thousands of innocent Jewish civilians in a future attack.

The latest virulently anti-Israel proposal from the U.N. came a few days ago from Secretary-General Antonio Guterres. He circulated a 14-page U.N. report that calls for the U.N. to create an armed multinational military or police force to protect Palestinians from Israel.

The report also proposes that U.N. rights monitors and unarmed observers be dispatched to protect Palestinians.

Guterres said there is “unacceptable” targeting of Palestinian civilians by Israel, arguing that a political solution to the Israeli-Palestinian conflict is necessary to secure the safety of Palestinians. But he said that "until such a solution is achieved, member-states may further explore all practical and feasible measures that will significantly improve the protection of the Palestinian civilian population."

Guterres also urged pouring in more U.N. humanitarian and development aid to "ensure the well-being” of the Palestinian population.

If you weren’t familiar with what’s really going on today, you might think from all the U.N. rhetoric that Israel is indiscriminately launching attacks on innocent and peaceful Palestinian civilians.

In fact, just the opposite is true. Palestinian and other terrorists are sending rockets, artillery shells, and kites and balloons armed with firebombs into Israel with the goal of killing as many Jews as possible and torching forests, nature preserves and crop-laden fields.

And the Hamas rulers of Gaza are using use foreign aid, building materials and the labor of Palestinians to construct terror tunnels under the security fence separating Israel from Gaza, with the goal of sending trained killers into Israel to kill or capture Jews.

Other terrorists enter Israel from the West Bank on deadly missions. Sometimes they succeed. More often they do not – but not for lack of trying.

Palestinians are suffering and dying because they are deliberately being put into harm’s way by their leaders. These leaders are dedicated not to helping their own people but to attacking Israeli Jews. They view ordinary Arabs as pawns in a struggle with Israel that has gone on for 70 years.

Yet at the U.N., Hamas remains immune from even the slightest diplomatic sanction. There is not a word from UNICEF when Palestinian children die digging terror tunnels for their Hamas masters; there is silence when the murderers of Israelis are celebrated and rewarded in Gaza and the West Bank.

The “humanitarian crisis” for Palestinians has been concocted and sustained by Hamas, while abetted by the Palestinian Authority. Secretary General Guterres knows this.

There is a simple way to improve the lives of ordinary Palestinians: remove the terrorist group Hamas as the ruler of Gaza and force Mahmoud Abbas’ Palestinian Authority to change its policies and at long last recognize Israel’s existence as a Jewish state. If Abbas will then make reasonable compromises and take steps toward peace, he will find Israel will reciprocate.

For starters, the Palestinian Authority should stop its “pay-to-slay” policy, which rewards terrorists and their families with cash stipends to encourage more terrorist attacks.

These payments amounted to an astounding $347 million last year, and are budgeted for $403 million this year.

As the Jerusalem Post reported in March: “Terrorists who have been sentenced to three to five years in Israeli prisons receive the average income of a Palestinian, about $580 per month. The families of those who committed more severe crimes and were involved in killing Israelis receive five times that each month for the rest of their lives.”

And the U.N. itself should stop funding schools where the core curriculum is focused on teaching Palestinian children hatred of Jews and their state – along with training in hand-to-hand combat, firing guns, kidnapping and sending kites and large balloons into Israel carrying bombs.

With this kind of indoctrination going to children from the elementary school years onward, it’s no wonder that the fires of hatred against Jews and Israel burn in Palestinian hearts.

If I had the opportunity to see Guterres again, I would tell him this:

Mr. Secretary-General, Palestinians don’t need 14-page reports with action plans to “protect” them from Israel. They need you to summon up the courage to tell the truth.

Want peace? Get rid of the terrorists; stop brainwashing children into a culture of death; tell Mahmoud Abbas to start acting like a president who wants peace and not war; stop treating terrorists like rock stars; and stop rewarding murderers.

In the extraordinary unlikely event that Guterres made such a declaration, there could be hope that both Palestinian and Jewish children may actually have a peaceful future.

But sadly, the chances of the U.N. coming out for steps like this anytime soon are almost nonexistent. We can only pray and hope that at some point – with the help of strong leadership from the United States – the U.N. and more of its member states will come out for a just and equitable peace that will allow Israelis and Palestinians to live side-by-side in peace and security.