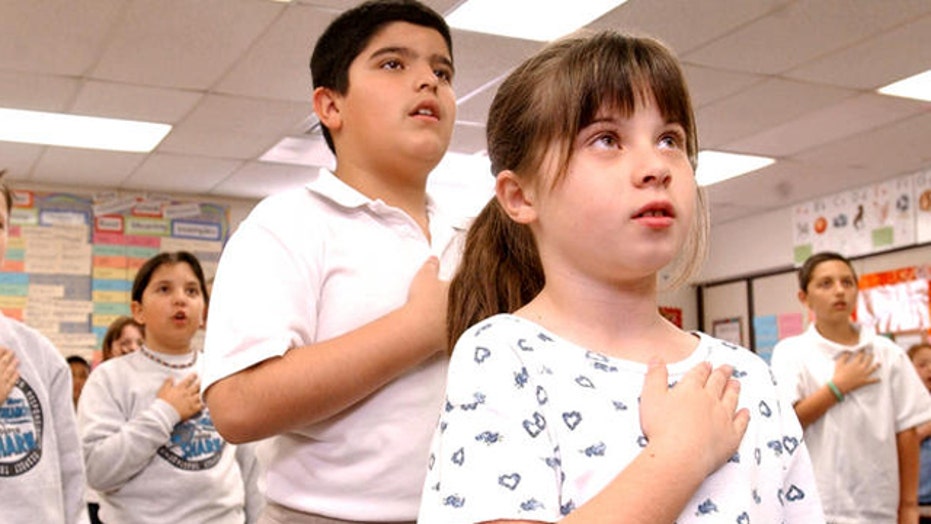 'One nation under Allah' ignites fury

Students at Pine Bush High School in Pine Bush, New York, knew right away there was something not quite right about the Pledge of Allegiance. That’s because the pledge was being recited in Arabic.

“One nation under Allah,” the student body president announced over the intercom system on Wednesday.

Reaction in the upstate New York high school was swift, and so was the backlash, The Times Herald-Record reports. Furious students tried to shout down the recitation in their classrooms. Other students sat down in protest.

School Superintendent Joan Carbone told the newspaper that the Arabic pledge “divided the school in half” – noting that many complaints came from Jewish parents and those who had lost family members fighting the war on terror.

The outrage among students was so significant that the school issued an apology.

However, state regulations do not mandate that the pledge be recited in a specific language. It recommends only specific wording.

(a) It is recommended that schools use the following pledge to the flag:

“I pledge allegiance to the Flag of the United States of America and to the Republic for which it stands, one Nation under God, indivisible, with liberty and justice for all.”

(b) In giving the pledge to the flag, the procedure is to render the pledge by standing with the right hand over the heart.

The school said the pledge was recited in Arabic as a way to honor National Foreign Language Week “and in an effort to celebrate the many races, cultures and religions that make up this great country.” It said the pledge had been recited in other languages throughout the week.

“I think it should be said in English,” he told television station TWCNews.com. “It is foreign language week but we don’t even offer Arabic in Pine Bush High School.”

Andrew Zink, the student body president, defended what he did and said he would do it all over again – telling TWC News he “knew exactly what would happen” because “it’s the right thing to do.”

Zink wrote on his Twitter account: “To everyone who disagrees with my decisions, I respect your right to do so and hope we can have a productive conversation,”

Oh, there’s been no shortage of conversation around the small town.

“Thanks to the illegal invasion and the concept of ‘celebrate diversity,’ English is becoming a foreign language in America,” one critic wrote on the local newspaper’s website.

A writer who claimed to be an American of Arab Christian ancestry said he, too, was offended by what happened.

“The Pledge of Allegiance isn’t a ‘salute’ to America,” he wrote. “It’s a promise to be loyal to it. Part of that loyalty should be to learn English and integrating into our culture.”

Based on the comments made by the student body president, it appears the Arabic recitation was less about celebrating a foreign language and more about stirring up trouble.

In my most recent book, “God Less America,” I illustrate how the nation’s public schools have been turned into indoctrination centers. Teachers are preaching a liberal ideology. Our schoolhouses have become places where Christianity is marginalized and Islam is given accommodation.