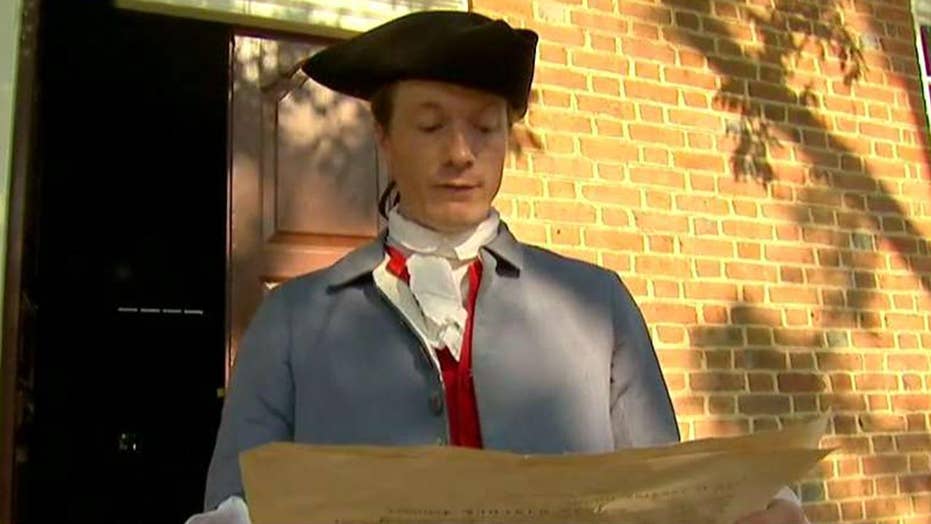 Anna Kooiman talks with the Founding Father in Colonial Williamsburg.

This Fourth of July, many Americans are spun up, protesting against President Trump with a long list of grievances – most recently his plans to appoint a conservative justice to the Supreme Court, as well as his immigration policies, his foreign policy, his trade policy, his tweeting … his everything.

Calls for the president’s impeachment grow louder from the self-styled Resistance – increasingly strident folks on the left, some proudly calling themselves socialists – who act as if they are fighting a tyrannical enemy nation occupying the White House. They may have seen one too many films about occupied Europe in World War II.

Trump administration officials are harassed at restaurants, movie theaters and their homes. And don’t forget that just a year ago, a gunman attacked Republican members of Congress at a baseball practice and severely wounded Rep. Steve Scalise, R-La., almost taking his life.

Underlying much of this angst and anger is a mistaken belief that the federal government is all that matters. But in reality, this isn’t true.

Let me review what we all should have learned in school. Power is not all concentrated in the hands of our elected president, Congress and the federal courts. Importantly, we have state and local governments that share power as well, all led by people the voters elect.

The Founding Fathers designed our system this way in the Constitution for a very important reason: liberty is elusive in a large land with a diverse population if government power is centralized and monopolized in Washington.

The United States of America made its Declaration of Independence from Britain on July 4, 1776. More than a mere document, the declaration launched the American project, giving our nation this mission statement:

“We hold these truths to be self-evident, that all men are created equal, that they are endowed by their Creator with certain unalienable Rights, that among these are Life, Liberty and the pursuit of Happiness. — That to secure these rights, Governments are instituted among Men, deriving their just powers from the consent of the governed.”

The implementation of “unalienable Rights” for all Americans (black people, women and Native Americans were regrettably excluded for many years) required a horrific Civil War and several amendments to the Constitution to be realized. But our form of government is, at its core, designed to foster “Life, Liberty and the pursuit of Happiness.”

Some political matters require a national standard. For instance, after the Supreme Court’s infamous Dred Scott decision in 1857, essentially upholding the practice of slavery and denying citizenship to black people, Abraham Lincoln observed: “A house divided against itself, cannot stand. I believe this government cannot endure, permanently, half slave and half free.”

Similarly, after the Supreme Court’s Obergefell decision in 2015 regarding same-sex marriage, there is no going back – contracts must be honored across state lines.

This still leaves an enormous amount of room for Americans to seek their preferred form of government at the state level.

People have rights, states have powers. Among the powers allotted to states are the ability to tax, spend, regulate and set laws for punishing crimes.

If the voters of California and New York want high taxes and big government, they may elect to do so. But if people in Texas and Florida prefer no income tax and smaller government, then that should be fine as well.

It is the mistaken notion of virtually limitless federal government power that has caused today’s so-called Resistance to become unhinged. Similarly, the exercise of this crushing federal power provoked the fed-up reaction that boosted voter turnout for Donald Trump in the 2016 election in states that hadn’t voted for a Republican presidential candidate in decades.

It comes back to rights. The founders believed in rights that didn’t require the labor or taxes of others to be fulfilled. We have a right to free speech, to practice of our religion, and to bear arms. We don’t have the right to expect that taxpayer funds will be used to provide us a computer and Internet access, a place to worship, or a rifle.

Similarly, we don’t have a right to free food, free housing, a free college education, free health care, free cars, and more freebies supplied by the government thanks to the labor and hard-earned cash of others.

Getting all these things for free may at first sound like heaven on Earth – a Bernie Sanders utopia. But if this socialist dream ever became reality, it would turn out to be a nightmare. It would send everyone’s taxes soaring through the roof and create a tremendous disincentive to work – meaning taxes would have to be raised even higher on those people who still held jobs. There would be shortages of just about everything.

Think I’m exaggerating? Just look at the economic basket cases of Cuba and North Korea today, or the old Soviet Union, China and Eastern European nations in the years before limited free-market reforms took effect. In all these cases, powerful and unchecked central governments set rigid national policies that crippled economies and wiped out personal freedoms.

The genius of the American system is to not leave all governmental power with the federal government. Instead, we allow states to function as laboratories of democracy.

The 56 signers of the Declaration of Independence made it clear that they saw the King of England’s far-away rule resulting in “a long train of abuses” with the “direct object (being) the establishment of an absolute Tyranny over these States.”

Today’s federal government frequently appears to have similar designs, with unelected bureaucrats in Washington setting policy for the whole nation, depriving voters in the states of self-determination through their elected state representatives.

On this Independence Day, let us resolve to turn our attention to our families, our communities, and our states, declaring independence from a distant and often unresponsive federal government.

Our national motto, “E pluribus unum” – out of the many, one – speaks to a paradox in this light. By allowing the many states room to formulate their own solutions using the democratic process, we can more readily unify into one America.

We celebrate this all on Independence Day.