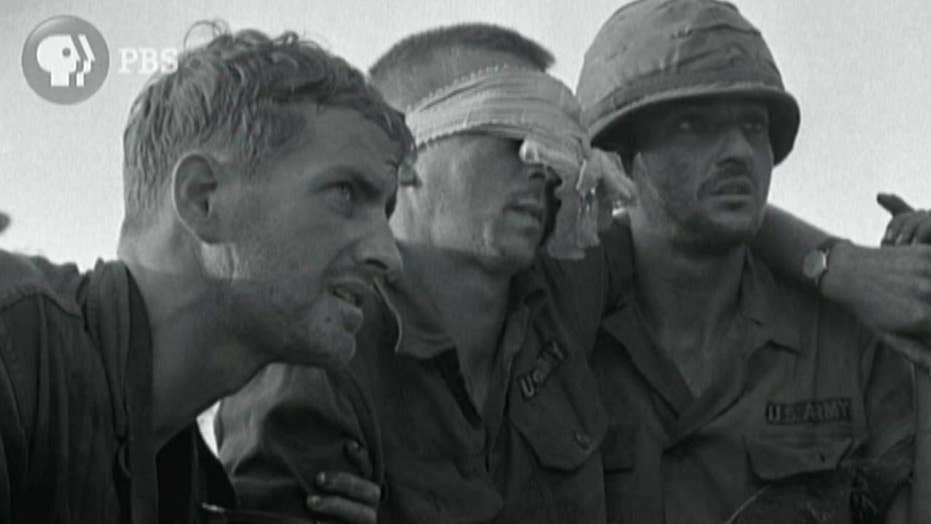 Conflict explored through eyes of those who lived it

Washington, D.C. – When Richard Nixon was in the White House, I was in Vietnam and he was my commander-in-chief. When I was on Ronald Reagan’s National Security Council staff, I had the opportunity to brief former President Nixon on numerous occasions and came to admire his analysis of current events, insights on world affairs and compassion for our troops. His preparation for any meeting or discussion was exhaustive. His thirst for information was unquenchable and his tolerance for fools was non-existent.

Mr. Nixon’s prosecution of the war in Southeast Asia is poorly told by Ken Burns in his PBS documentary "The Vietnam War.”  That is but one of many reasons Mr. Burns’ latest work is such a disappointment and a tragic lost opportunity.

It’s sad, but I’ve come to accept that the real story of the heroic American GIs in Vietnam may never be told. Like too many others, Ken Burns portrays the young Soldiers, Sailors, Airmen and Marines of the Vietnam War as pot-smoking, drug-addicted, hippie marauders.

Those with whom I served were anything but. They did not commit the atrocities alleged in the unforgivable lies John Kerry described to a congressional committee so prominently featured by Mr. Burns. The troops my brother and I were blessed to lead were honorable, heroic and tenacious. They were patriotic, proud of their service, and true to their God and our country.

To depict them otherwise, as Ken Burns does, is an egregious disservice to them, the families of the fallen and to history. But his treatment of my fellow Vietnam War veterans is just the start. Some of the most blatant travesties in the film are reserved for President Nixon.

Ken Burns may not recall – but my family remembers: It was Lyndon Johnson who sent my brother and me to war. It was Richard Nixon who brought us home.

Because of endless fairy tales told by Ken Burns and others, many Americans associate Richard Nixon with the totality and the worst events of Vietnam. It’s hardly evident in the Burns “documentary,” but important to note; when President Richard Nixon was elected in 1968, he inherited a nation – and a world – engulfed in discord and teetering on the brink of widespread chaos. His predecessor, Lyndon Johnson, was forced from office with a half million U.S. troops mired in combat and fierce anti-American government demonstrations across the country and in our nation’s capital.

Ken Burns may not recall – but my family remembers: It was Lyndon Johnson who sent my brother and me to war. It was Richard Nixon who brought us home. It is very likely we are alive today because Richard Nixon kept his word.

That’s not the only opportunity for accuracy Mr. Burns ignored. He could have credited President Nixon with granting 18-year olds the right to vote in July 1971 with the 26th Amendment to our Constitution [does “Ken” even recall the slogan, “Old Enough to Fight – Old Enough to Vote!” He should. Burns turned 18 that same month.].

President Nixon pressed on to all but finish the war. As promised, he brought our combat units home, returned 591 Prisoners of War to their wives and families, ended the draft, leveraged the conflict to open ties with China and improved relations with the Soviet Union. He pushed both Communist giants in Beijing and Moscow to force their North Vietnamese puppet into a negotiated settlement. Yet, he is portrayed in the Burns documentary as a cold-blooded, calculating politician more interested in re-election than the lives of U.S. troops in combat.

Contrary to the film’s portrayal, Nixon had a complicated strategy to achieve “Peace with Honor.” His goal was to train and equip the South Vietnamese military to defend their own country in a process he called “Vietnamization” and thereby – withdraw American troops.

President Nixon succeeded in isolating the North Vietnamese diplomatically and negotiated a peace agreement that preserved the right of the people of South Vietnam to determine their own political future. Imperfect as the Saigon government was, by 1973 the South Vietnamese had many well-trained troops and units that fought well and were proud to be our allies. This intricate and sophisticated approach took shape over four wartime years but receives only superficial mention in Mr. Burns’ production.

Despite Democrat majorities in both houses of Congress, Nixon – a deft political powerhouse – attained consistent support from America’s “Silent Majority.”

If Mr. Burns read President Nixon’s memoir or his two successive books in which the former president recounts his emotional anguish at the war’s toll – "No More Vietnams" and "In the Arena" – there is little evidence in the PBS production. Instead, Burns cherry-picks from the infamous “Nixon tapes” to brand the president as a devious manipulator, striving for mass deception – a patently false allegation.

By the time President Nixon resigned office on August 9, 1974, the Vietnam War was all but won and the South Vietnamese were confident of securing a permanent victory.  But in December 1974 – three months after President Nixon departed the White House – a vengeful, Democrat-dominated Congress cut off all aid to South Vietnam.

It was a devastating blow for those to whom President Nixon had promised – not U.S.  troops – but steadfast military, economic and diplomatic support. As chronicled in memoirs written afterwards in Hanoi, Moscow and Beijing, the communists celebrated. The ignominious end came with a full-scale North Vietnamese invasion five months later.

Despite the war’s tragic conclusion – and the trauma that continues to afflict our country – there is little in the Burns so-called documentary about the courage, patriotism and dedication of the U.S. troops who fought honorably, bravely, and the despicable way in which we were “welcomed” home.

The PBS “documentary” frequently reminds viewers of the “gallant nationalist fervor” among the North Vietnamese. But the South Vietnamese are portrayed as little more than conniving urchins and weak pawns of the imperialist Americans.

In a technique favored by the “Progressive-Left,” Mr. Burns uses a small cadre of anti-war U.S. and pro-Hanoi Vietnamese “eyewitnesses” to explain the complicated policies of the U.S. government. Mr. Burns apparently refused to interview Henry Kissinger, telling the Portland Press Herald he doubted “...Kissinger’s authority to adequately convey the perspectives of the U.S. government.” This alone disqualifies this “documentary” as definitive history on the Vietnam War.

Though Ken Burns and his collaborators claim otherwise, the real heroes of “The Vietnam War” were not U.S. protestors, but the troops my brother and I led. They fought valiantly for our country and the president who brought us home.

Since meeting President Nixon in the 1980s, I have always remembered how he understood the incredible sacrifice of American blood in the battlefields of Vietnam. He was dedicated to ending the war the right way and committed to sustaining American honor. He kept his promise to bring us home.

Ken Burns failed to keep his promise to tell all sides about the long and difficult war in Vietnam. Mr. Burns, like John Kerry, has committed a grave injustice to those of us who fought there.