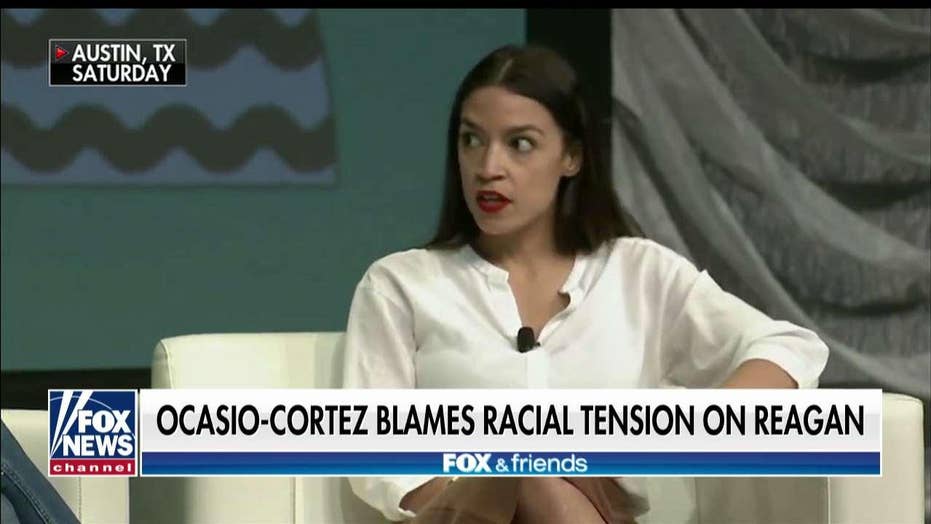 This week on the new liberal playground, SXSW in Austin, freshman Congresswoman Alexandra Ocasio-Cortez, D-N.Y., threw sand in the eyes of capitalism while continuing her sing-song of socialism.  Amongst those in the crosshairs of her juvenile rantings were our 32nd president, FDR, a Democrat who authored the New Deal, and our 40th President – Ronald Reagan – who was criticized for “screwing over working class Americans.”

While you have to admire her spunk and passion, perhaps it would benefit Ms. Ocasio-Cortez to check her facts, listen more, talk less and learn from those who have gone before her – including the widely beloved and admired Ronald Reagan.  He not only inspired our nation, but in many ways changed the world.  That’s quite a resume for her, a rookie, to be taking a swing at.

REP. ALEXANDRIA OCASIO-CORTEZ, AT SXSW, SAYS AMERICA'S WEALTH IS BEING ENJOYED BY A SMALL AMOUNT OF PEOPLE

Ronald Reagan famously said, “It isn’t so much that liberals are ignorant, it’s just that they know so many things that aren’t so.”  AOC, and much of her generation, sadly epitomize this quote. And the irony is that only someone who lives in a free society can even make those claims and talk about embracing socialism as she does.

AOC and the progressive left are in love with an illusion, the virtual reality of socialism - the hologram of its promised benefits, rather than the realities of what it actually is.

The truth is there is no historic precedence for the success of socialism or anything the progressive left is currently peddling.  In fact, there is voluminous evidence to the contrary – the collapse of Venezuela being Exhibit A.  How can you ignore that tragic political and humanitarian crisis playing out before our very eyes while saying somehow our version of socialism will be better or different?

Socialism has begun to parade itself like a proud peacock, fanning out its beautiful feathers of enticement and entitlement with a promise of equity.  Its colorful plumes draw our attention to an assortment of environmentally friendly offerings – all which promise to improve our lives, save our planet and earn the admiration of the world.  We are hypnotized by the Technicolor – lost in visions of splendor. Yet will any of it truly improve the lives of Americans? Resoundingly, no.

AOC is a product of the transformation of the American education system from a place of learning to a place of political indoctrination.

It’s often been said that if you’re not a liberal when you’re young, you have no heart.  And if you’re not a conservative when you’re older, you have no brain.  So even though AOC is right on schedule with her belief system, it’s frightening to think that over 100 of her Democratic colleagues are following her lead down a crazy path of the Green New Deal.

AOC is a product of the transformation of the American education system from a place of learning to a place of political indoctrination.  She is confident in her ideology because she believes that if she is morally right then facts and statistics don’t really matter.  What a dangerous platform for a leader of her position and following to stand upon.

The danger of omission is that all these seemingly too-good-to-be-true promises are indeed just that. Too good to be true.  Absolutely none of what they are proposing is possible to provide or feasible to guarantee for everyone in America - especially as the number of people who would be entitled to benefits continues to grow every single day via illegal border crossings.

In addition, the underlying danger of taking the bait of all of these supposed freebies and promised benefits is the hook that lies just beneath.  The hook of government control.  While the idea of safety, security, health and prosperity for everyone is enticing, if it comes without personal cost then it also comes without personal choice.  For every bit of reliance on government you embrace, you sacrifice much more in freedom. And once you surrender, it’s hard, if not impossible, to reclaim.

Free doesn’t equate best.  To most people, confidence in a preferred outcome is something still worth paying for.  Yet in listening to the increasingly progressive left one would think that the utopia of perfect American life will be achieved by government having greater influence and control over our lives. Is there anything the government does that you want more of?  Yet the left continues to promote larger government. More bureaucracy.  More power in the hands of Washington.  Less power in your hands.

Ronald Reagan warned us against socialism or any form of greater government influence or control, saying: "Freedom is never more than one generation away from extinction. We didn't pass it to our children in the bloodstream. It must be fought for, protected, and handed on for them to do the same."  We would be wise to heed his warning and remember that government is rarely the solution to our problems – it often IS the problem.  Government doesn’t make your life better.  Only YOU can make your life better.

Peggy Grande is Chair of @World4Brexit and author of, "The President Will See You Now: My Stories and Lessons from Ronald Reagan's Final Years", a keynote speaker, political consultant and media contributor. She was the executive assistant to President Ronald Reagan from 1989 to 1999. Follow her on Twitter @peggy_grande.
ADVERTISEMENT