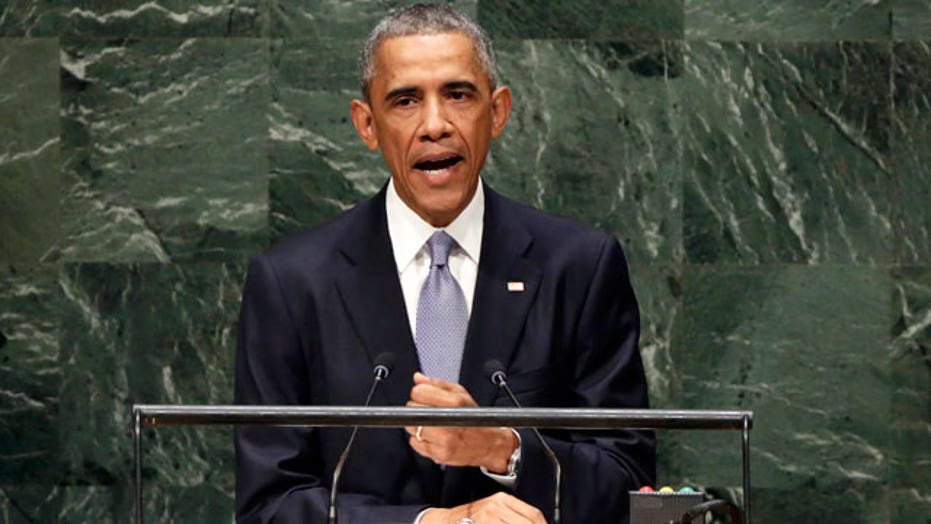 President Obama at the UN: rhetoric vs. reality

Addressing the U.N. General Assembly on Wednesday, President Obama said that all nations “must meet our responsibility to observe and enforce international norms.” What he meant by that wasn’t exactly clear, starting with what those norms are, and who gets to define them. But that kind of thinking on the president’s part is precisely why the United Nations Arms Trade Treaty (ATT) is so bad for the United States.

The ATT is a convention that attempts to stop rogue regimes from selling guns and keep mercenaries, terrorists and other bad guys from buying them. It has long been controversial in the U.S. because of concerns that it will undermine Second Amendment rights and hurt the ability of the U.S. to arm allies like Israel. At its core, the ATT calls on nations to enforce easily-manipulated and constantly-evolving “standards” to decide what nations are fit to import arms. In other words, “international norms.”

The problem is that the ATT is a conveyor belt to a destination that we cannot control. That’s because it would bind us—once we formally ratified it-- to submit to norms defined by the so-called international community.

The ATT does not bind us until we agree to it, and there is a formal process for doing that. It means submitting the treaty to the Senate, receiving the Senate’s advice and consent—which requires a two-thirds majority-- and passing the necessary implementing legislation through both the House and the Senate.

But President Obama apparently feels that the U.S. “must” observe the treaty’s norms even if that process hasn’t taken place. He’s implying that he has the right – even the obligation – to enforce the treaty’s intent, even if the Senate has never accepted the document that embodies them. That is, even though no American legislature has had a chance to have a say in what those “norms” are.

This is not new in an administration that believes it can achieve its goals by making up regulations rather than passing laws that involve other branches of government.

The Senate, for example, has never voted in favor of any climate change treaty. Yet the Obama administration is driving the nation down the road of complying with the basic elements of the Kyoto Protocol, which the Senate rejected even before it was negotiated by a vote of 95-0.

The Senate has never voted to ban the U.S. use of land mines, and it has never given its advice and consent to the Ottawa Convention, a treaty that would outlaw all land mines. And there are a lot of good reasons for that: as Chairman of the Joint Chiefs of Staff Gen. Martin Dempsey put it six months ago, land mines are “an important tool in the arsenal of the armed forces of the United States,” especially when helping smaller nations resist the assault of bigger ones (think Ukraine).

But on September 23, the administration abandoned the U.S. use of anti-personnel land mines anywhere in the world outside Korea. It did this to please the progressive activist groups that were behind the Ottawa Convention, and which, as the Convention was being negotiated, viewed the U.S. as an adversary that had to be defeated.

On Tuesday, the administration posted its surrender note, solely because it wanted to comply with the Ottawa Convention’s norms. It is going to use its rule-making power to give the activist groups almost everything they want, with promises of more later on.

The ATT needed 50 countries to ratify it to come into force. It reached that mark on September 25, ‎the first anniversary of Secretary of State John Kerry’s signature of the pact. In 90 days – on Christmas Eve, ironically – it will be binding on the nations that have ratified it, and on no one else.

Fortunately, as an excellent letter sent to the White House by Senators Jerry Moran, R-Kan., and James Inhofe, R-Okla., demonstrates, the Senate is in no mood to ratify this benighted treaty.

But the activists will keep on pushing, and they have an ally in President Obama, his infamous rule-making pen and, now, his assertion that international norms are binding on the United States.

That’s bad for our foreign policy, and bad for our rights – including, most fundamentally, our right to govern ourselves. For if international norms truly do bind the U.S., the voice of the American people, and the will of Congress, must give way before either one has had its say.

Theodore R. Bromund is the senior research fellow in Anglo-American relations for The Heritage Foundation’s Margaret Thatcher Center for Freedom.