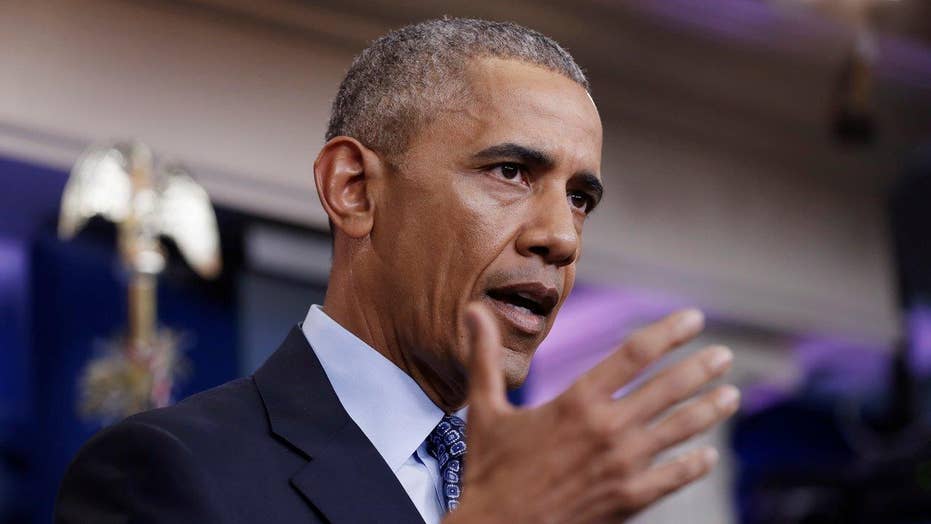 Obama says he is very comfortable with his Manning decision

The president believed the Army leaker's sentence was excessive; Catherine Herridge with the latest for 'Special Report'

President Obama’s last press conference was, despite the election’s rejection, an otherworldly stroll down victory lane.  Listening put one in mind of “Alice in Wonderland.”

He strained to project a positive self-assessment, despite leading the most historically unanchored, divisive and out-of-touch administration in modern times.

Having regularly divided Americans along economic, racial, ethnic, religious, geographic and policy lines, repeatedly emphasizing differences over common points, Obama pivoted to grand rhetoric – congratulating himself on being a peacemaker.

All this was predictable.  The contrast between how he sees the world he leaves behind, and how Americans see the world he has created for them, is stark.  But this is how President Obama chose to govern, doing one thing, saying another.  And this press conference was the exclamation point.

The press conference confirmed what everyone expected:  Obama leaves office as an unrepentant progressive, unapologetic for much of anything, from unprecedented domestic divisions and disrespect for law enforcement to a shattered foreign policy, adversaries and allies doubting us.

From his decision to reject Israel at the United Nations to glibly upending traditional family values, from politicizing the Justice Department to commuting a 35-year sentence for treason, the president sees not what he has wrought.  This is why his Party has sent packing, why they have shed more than 1000 combined legislative, gubernatorial and congressional seats since Obama took office.

Instead of a balanced review, he offered a tinny, thin valedictory.  But then this was the man who directed his Secretary of Defense to award him the Distinguished Service Medal, and then pinned on Vice President Biden a Presidential Medal of Freedom. Get all you can, while the getting is good; take no blame, accrue all credit; deflect and ignore failure, create victories where there are none.  Coming to an end are eight years of strangely affected, regularly self-serving nonsense.  And this press conference was a distillate.

Clicking through pre-set names, Obama extolled the virtues of a “free press,” then prodded these fawning followers to “continue the same tenacity” with his successor.

Legacy?  He was “comfortable” commuting the treason sentence of Chelsea (nee Bradley) Manning, saying she was “not unpunished,” that her sentence was “not pardon.”  Never mind senior military leadership advised against this unprecedented move.

Veering left, he pressed a non sequitur on national security, saying it involves “people whose lives are put at risk” – ironically seeking to defend Manning’s release, a convict who stole tens of thousands of classified documents, put them on line endangering countless American lives.  Obama’s own lax security allowed China to hack 18 million Americans’ most sensitive data.  He saw “no contradiction” in denouncing WikiLeaks, to which Manning had released the material, adding it was “not clear WikiLeaks was a witting participant.”  What?  Really?

Advice to Trump on Putin:  Be “constructive” toward Russia, as he claimed he initially had been.  Then Obama claimed he had “helped Russia diversify and improve their economy,” tried to “help the Russian People use their incredible talents.”

Then on into Ukraine and sanctions.  Which slid into a lecture on “international norms,” “leading by example,” and how Obama had told Putin how to behave.  Suddenly, Obama was bragging on “successful non-proliferation” policies.  No mention of Iran or North Korea.

Suddenly, another nugget:  “Important that the United States stand up for people, since big countries don’t go around and bully smaller countries,” especially “women’s rights” and “freedom of the press.”  He noted, in a parting apology-for-America-cum-insult, that “the United States has not been perfect in this regard,” nor allies “met the standard.”  Wow.

Asked about whether a Democrat boycott of the Trump inauguration was consistent with respect for a peaceful transition of power, he demurred.  No comment.   He and Michelle would be there.

Looking forward, “I don’t expect enormous overlap.”  You don’t think?  On Trump, he opined:  Reality “may lead him to the same conclusions” Obama held, and “reality has a way of biting back.”  Yes, the election.

Another Obama gem:  “The job is of such magnitude that you cannot do it by yourself, you must depend on a team.”  Good to know.

“If you only listen to people who agree, you will start making mistakes.”  Words from experience, certainly.  And as for Obama’s future: “Want to do some writing, not talk so much.”  Good, good.

Setting strawmen, the departing president said he might speak on “core values,” if “systematic discrimination was ratified,” “explicit obstacles … set against voting,” and “institutional efforts” occurred “to silence dissent or the press.”

What contempt for an incoming president, and for all Americans. What condescension and lack of grace. And irony: He sees no inconsistency in advocating for rights respected in America, while rewarding Cuba for violating the same rights, or Iran. Why honor Cuba’s communist leaders? That is “the old way of thinkin’ – that did not make sense.”  Why? No one in the “tenacious” press asked.

Forgetting this vote and his “red line” threats, he warned Mr. Trump “sudden, unilateral moves can be explosive.” And “this is volatile stuff, so pay attention,” “actions have consequences.”  Right.

In closing, he praised the Olympics and his children, adding he “could not be prouder of the transformation in our society in the last decade,” done – he thinks – with no “backlash,” and “in some cases these issues were controversial.”  Right.  His last jab: “Voter fraud is fake news,” so no need for identification at polling places.

There you have it.  What a way to go out, what a victory lap, what a mess.  As lawyers say, res ipsa loquitur, the “thing speaks for itself.”  It sure did.

To President Obama’s way of thinking, the past eight years have brought people together, made a vibrant economy, elevated America’s international respect, secured the world and advanced civic order, civil rights, and the most wonderful transformation of America.  He seems oddly convinced.

And that …is why so many Americans are so ready for the Trump/Pence Team – seasoned leaders, prepared, poised, battle hardened and honest.

Obama is still the unrepentant progressive, blind to the reasons for his party’s demise, pleased with his evanescent “accomplishments.”

To him, the final press conference was great. Now, he packs his bags to write his book, “President Obama in Wonderland.”