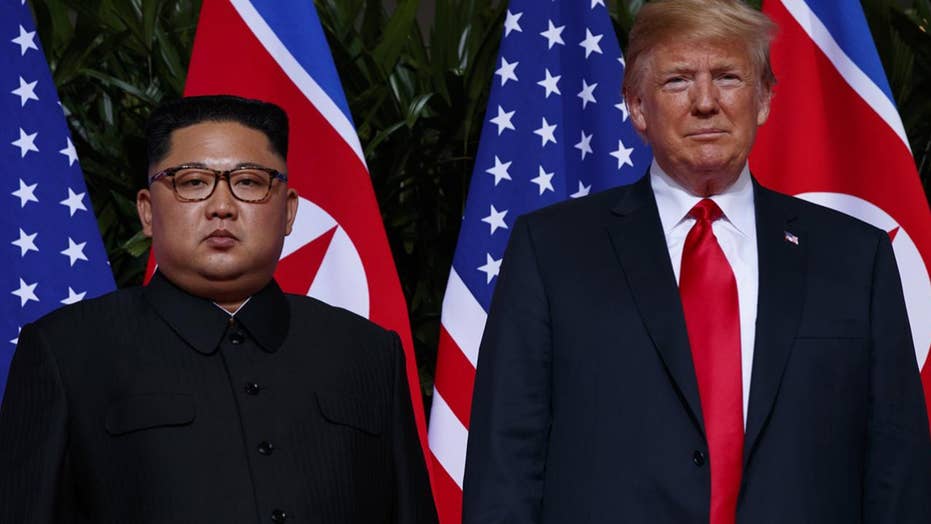 One year after the summit in Singapore, where do things stand with North Korea?

Former intelligence officer Don Bramer on relations between the U.S. and North Korea.

On February 22, 2019, I was inside the North Korean embassy in Madrid.

I am a North Korean refugee. After being orphaned as a child, I faced hunger daily and fled alone as a young teenager to China before getting captured, repatriated and sentenced to forced labor and starvation in an internment camp.

I witnessed public executions, suicides, and mass starvation, the everyday atrocities in an evil totalitarian regime.

After nearly dying in the camp, I was released as I was no longer useful as a laborer.

I then managed to escape again - this time, all the way to freedom and refugee status in a free country.

I am grateful to have experienced freedom and a full stomach.

My friends and family and millions of my countrymen have not experienced such luxuries. The world has forgotten them.

When I learned of the existence of the North Korean dissident group  Provisional Government of Free Joseon, I was overwhelmed with joy and relief.”

Finally, I had discovered a group of people who felt a personal responsibility to stop the crimes against humanity in my homeland.

Like leaders of the Korean independence movement in the last century, a diaspora based all over the world, these courageous people risked their lives for years to rescue people like me and also those from more elite positions, whom Pyongyang would rather murder than to allow defection.

When I found the Provisional Government of Free Joseon I found my purpose and my destiny: to use the privileges I had been given as an adult to help save those left behind. Those who still live in the hell I was freed from.

On February 22, I approached the front gate of the North Korean embassy in Madrid. The others had already been invited in when I arrived.

I rang the buzzer and watched the door open. I was overwhelmed with emotion. After a lifetime of suffering in North Korea, after years of wondering whether I would ever see my homeland again, after night after night of nightmares and dreams of a better future, I stepped across the threshold and saw the North Korean flag.

My hands shook and I felt dazed. Inside, my colleagues were ensuring the compound was secure while some of them were speaking with diplomats in a separate room.

I was at the embassy to help a North Korean diplomat defect.

Stepping inside the embassy was like being transported back to North Korea. The walls were lined with propaganda singing praises to North Korea's leaders. Each room had portraits of the leaders - watching your every move and thought, peering into your soul. There are no secrets in North Korea. Secrets are treason. Secrets mean death.

I felt pity for these diplomats. Although they are among the most elite and trusted in the North Korean system, the residences were bare and the refrigerators in the building were nearly empty.

All those billions spent on weapons of mass destruction, while millions of their people starve, picking corn kernels, and rice grains from trash and toilets to eat.

I cannot describe what it felt like to be a free North Korean stepping foot into the North Korean world. But I can tell you what it made me want to do.

I entered a room with pristine portraits on the walls. They were the faces of the leaders who had driven their people into poverty, oppression and starvation. Men who turned us into animals while growing fat off luxury goods and threatening the world with nuclear weapons.

I stepped on a chair, raised the portraits of Kim Il Sung and Kim Jong Il, turned and smashed them on the ground.

No one there objected or tried to stop me. In fact, they encouraged me.

I cannot explain how that felt. It was as though I was striking a blow on behalf of millions upon millions of my people, dead, alive or yet unborn, against this evil injustice. The sound of the shattering glass felt as though the chains in my heart also shattered.

These men are heroes. They and their families deserve better. Somehow, the United States is now hunting us on behalf of Pyongyang, via Spain.

In North Korea, I would have faced public execution for such an act. It is unforgivable. It is unfathomable.

If I had heard rumors or watched a video of what I had done, the imagery alone would have stunned me. These dictators are not gods, they can be challenged.

We can have a better life. The Kim family only has as much power as we give them.

I later heard that footage of my act of destruction was aired on BBC in Pyongyang’s luxury hotels before censors could catch it.

How many party elites, waiters, cooks, cleaning and maintenance staff saw it? How many whispered what they saw to trusted friends and family?

Our team was in the embassy not to “attack” or “raid.” We were asked by someone inside to facilitate significant defections.

I was not in the room where hours of discussion occurred between our team and the diplomats, but we had been briefed and prepared to help protect those who would turn against the regime, as we have done before.

Our team was under strict instructions not to harm anyone inside. And we did not. We were also prepared to deal with traps or ambushes set by North Korean security forces - something that has happened often in the Underground Railroad in China.

I do not know for certain why the defections could not immediately happen. Perhaps when faced with the moment of decision, the diplomats could not step across the line.

But I do know definitively that the narrative presented as fact about what took place at the embassy by the Spanish courts - that Free Josen was an “organized gang” that either sought to steal and then broker data or electronics or politically intervene in the Hanoi discussions is completely false and absurd.

I cannot fathom why Spain would take North Korean testimony at face value and issue arrest warrants. Would a group seeking to attack or raid use their own passports, enter via the front gate in the middle of broad daylight with neighbors walking around, and stay for five hours?

If the intent was simply to harm or steal, why not leave in minutes? Why not break in at midnight? Why voluntarily later meet with the FBI unless they felt no crime was committed?

If our team was using force and intimidation to attempt to “persuade” diplomats to defect, why spend five hours engaging in conversation?

Wouldn't a group like that be happy to use force simply kidnap the diplomats and fake defections? Wouldn't any North Koreans who spent five hours with dissidents (who have declared the regime must end) have to fabricate a narrative and “prove” to their regime that they stayed in line?

The leadership of the Provisional Government of Free Joseon has been reluctant to publicly share the truth about what happened in Madrid, to protect sources, assets, and methods. They have been informed of threats against their lives from Pyongyang but still, they bravely carry on. They stood for freedom and took enormous risks to help protect others.

Despite this, one of my colleagues Christopher Ahn, a former U.S. Marine of Korean heritage, has already been arrested by the United States.

One of our leaders, Adrian Hong, is being hunted by U.S. Marshals. His face and information is being broadcast by media around the world – making it far more likely for Pyongyang to find and eliminate its opposition.

U.S. marshals have intimidated innocent, unaffiliated family members of our group at gunpoint and with handcuffs, and even threatened, repeatedly, to place the 3-year-old child of one of our members into foster care after menacing the grandfather by saying someone might hurt the child with a machete and repeatedly threatening to arrest him.

I have always believed America is better than this. That it is a land where you are innocent until proven guilty, and each man and woman protected by laws and the Constitution.

These men are heroes. They and their families deserve better. Somehow, the United States is now hunting us on behalf of Pyongyang, via Spain.

I cannot pretend to understand the political calculations that have led to this moment. But I know what is right. These are good men who have fought for humanity and goodness for years without the support of governments.

They rescued Kim Han Sol and his family after his father, Kim Jong Nam, was assassinated with chemical weapons in Kuala Lumpur.

They and others have led many other missions since then, helping key defectors to escape and building a network of dissidents inside North Korea.

I ask the Spanish courts to drop the charges against these men.

I ask the United States to deny extradition.

No crimes were committed in Madrid that day and extradition treaties allow for political acts to be exempted.

What was this if not political acts? Dissidents standing up against the totalitarian regime in Pyongyang, having formed a provisional government, took enormous risks to help others who might also leave the regime and seek freedom. There were no weapons used. There were no acts of terrorism. There was no harm to innocent people.

I never expected that my brothers might face imprisonment and prosecution in western democracies.

I ask the help of political leaders and representatives of conscience to help rectify this travesty. Let these men go back to their families. Let us go back to rescuing those fleeing the worst dictatorship in modern history -- a place the civilized world has forgotten. If you will not help us, at least do not hurt us.

Free these men, so that they can free their people.

The author is a North Korean defector, orphaned as a youth and a member of the Provisional Government of Free Joseon