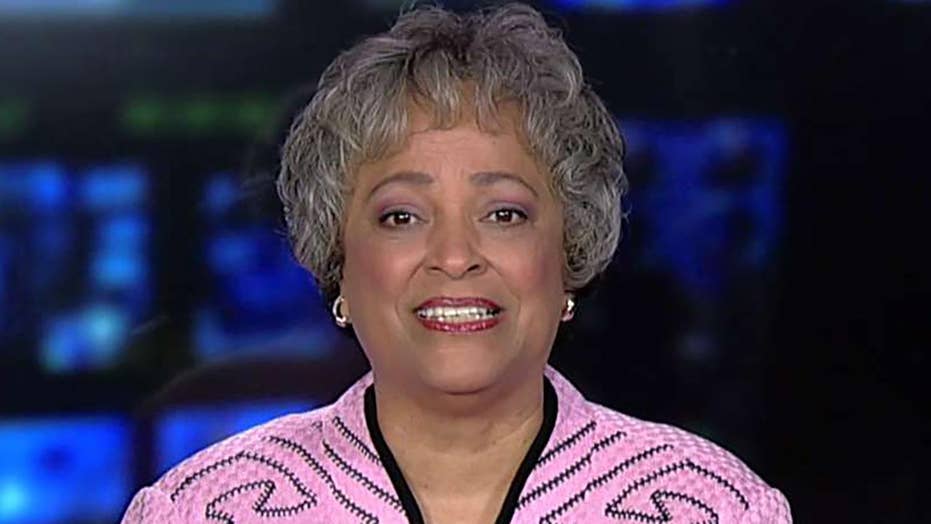 Heritage Foundation President Kay Coles James, who grew up on welfare, shares her message about what Americans can do to make things better.

When President Trump recently called attention to the problems of Baltimore – including the suffering of residents who live in substandard housing and must endure a high crime rate – he was criticized and called a racist by some.

But in fact, Baltimore faces many problems, and many Democratic officials and residents of the city have pointed these out for years.

The current Baltimore cannot be fixed. However, a new successful Baltimore might be invented.

HERITAGE FOUNDATION PRESIDENT ON BALTIMORE: 'ARE WE MAD ENOUGH YET' THAT WE'LL DO THINGS DIFFERENTLY?

Let’s start with two reminders of reality. The problems Baltimore faces are big. A lot of smart, decent, dedicated people who have invested their lives and money have still been defeated by the problems.

Drug addiction and fatalities have skyrocketed in the city. Baltimore has the highest opioid fatality rate in the country.

Baltimore also has the highest murder rate in the country per capita. It has an underfunded, inadequately sized police force that is deeply distrusted by the people who most need its help – thanks in part to a current corruption scandal.

There is no stability in the Baltimore police force. There have been five police commissioners in the four years since Freddie Gray died in police custody.

As the murder rate in Baltimore reached almost 14 times the per capita rate in New York City, former Maryland Gov. Martin O’Malley told The Economist that the number of police in Baltimore fell from a high of 3,278 in 2002 to 2,514 now. The unofficial motto of the city seems to be “crime up, cops down.”

As the murder rate in Baltimore reached almost 14 times the per capita rate in New York City, former Maryland Gov. Martin O’Malley told The Economist that the number of police in Baltimore fell from a high of 3,278 in 2002 to 2,514 now. The unofficial motto of the city seems to be “crime up, cops down.”

Since 2007, there have been 3,359 people killed in Baltimore. If former New York City Mayor Rudy Giuliani’s policing reforms had been applied to Baltimore, 2,519 of those people might be alive today.

Under Giuliani, the murder rate dropped 75 percent in New York City, and it dropped even further under Mayor Mike Bloomberg.

And finally, as The Economist reported: “Of those murdered in 2018, 84% had previous arrest records – as did 86% of the suspects.”

So, why did 2,519 Baltimoreans have to die unnecessarily.'

It's partly because Baltimore has schools that fail to have a single student performing at grade level – even while the system is spending $16,184 per student.

Horn continued: “Incompetent so-called leaders and teachers’ unions have corrupted the public school system. They hide behind tenure while indoctrinating students instead of educating them, condemning the next generation to the consequences of the corrupt and broken system they created. It’s not all their fault, though: the children they teach have largely grown up in chaotic homes that do not value learning.”

We were warned about the collapse of schools a generation ago. In 1983, The Reagan administration issued a report titled “A Nation at Risk,” warning that: “The educational foundations of our society are presently being eroded by a rising tide of mediocrity that threatens our very future as a Nation and a people.…  If an unfriendly foreign power had attempted to impose on America the mediocre educational performance that exists today, we might well have viewed it as an act of war. As it stands, we have allowed this to happen to ourselves.”

The 1983 report continued: “We have, in effect, been committing an act of unthinking, unilateral educational disarmament. Our society and its educational institutions seem to have lost sight of the basic purposes of schooling, and of the high expectations and disciplined effort needed to attain them.”

I participated in press conferences and workshops launching “A Nation at Risk” 36 years ago. After a generation of effort, disasters like Baltimore have convinced me that we cannot reform the teachers’ union and the bureaucracy that protects it.

From the standpoint of the teachers’ union, the system works perfectly because it pays salaries on time – no matter how many children’s lives are destroyed through a lack of learning.

Furthermore, in most cities the teachers’ unions are the most powerful local power center and can make it too expensive for elected officials to try to reform the schools. In many ways, the corruption of the school systems, which take money for work not accomplished, is at the heart of the sickness of our most self-destructive cities.

Endemic corruption throughout the local government means a lot of the business community accepts and sustains corruption. Politicians don’t bribe themselves.

While there are areas of excellence and prosperity in Baltimore (John Hopkins University and Medical Center, for example) they are islands in a sea of poverty, despair and dysfunction. Nearly 81,000 of Baltimore’s 480,000 adults do not have a high school diploma. And many with a diploma can’t perform at the education level the diploma implies.

The death of Freddie Gray in April 2015, and the riots that followed, spurred a serious effort to turn things around for the poverty- and crime-ridden parts of Baltimore.

A number of local leaders committed themselves to helping Baltimore recover. Then, as Erin Cox reported in The Washington Post: “Years before Trump’s attacks, Freddie Gray’s death sparked a huge effort to heal Baltimore. It wasn’t enough.”

The Cox article is a useful outline of the passion, resources, courage, and personal time different people poured into Baltimore in response to what had become an overwhelming crisis. Ultimately, it failed and, if anything, left the reformers more depressed and more discouraged than ever.

Given these realities, I think it is virtually impossible to reform the current Baltimore system. The corruption is too great, the bureaucracies are too powerful, the culture of despair and dependency is too widespread, and the stunning decentralization of authority and activism is too great.

As David Warnock of the Warnock Foundation wrote to me: “Until we deal with the systematic and pervasive corruption in our city, we will not be able to create the civic institutions that thrive in other cities. Until we prosecute the people who paid off Catherine Pugh for example, another new set will come along to take down the next generation. It’s literally been going on since Garrett ran the B&O railroad in the 1870’s – one white oligarch after another controlling one mayor after another.”

Warnock continued: “Until the citizens of Baltimore demand better educational outcomes, and that political leaders stand up to the educational status quo that produces some of the worst K-6 outcomes in the country, we are not going to end the cycle of violence in our city and create young people prepared for today’s job market. At Green Street Academy, only two – count ‘em two – out of 125 children who will start with us this fall in 6th grade read at grade level. They were chosen by lottery. Google the probability of a high-quality life if you can’t read by third grade if you want to see the future of Baltimore unless we get serious about educational reform.”

Faced with a problem this large, I always turn to two great leaders and their advice on solving really hard problems.

President Dwight Eisenhower said: "Whenever I run into a problem I can't solve, I always make it bigger.”

Albert Einstein said: “We cannot solve our problems with the same thinking we used when we created them.”

We should take the advice of Eisenhower and Einstein and make the problem of Baltimore even bigger and then suggest a dramatically new and different plan for getting to a prosperous, safe, educated, healthy, and honest Baltimore.