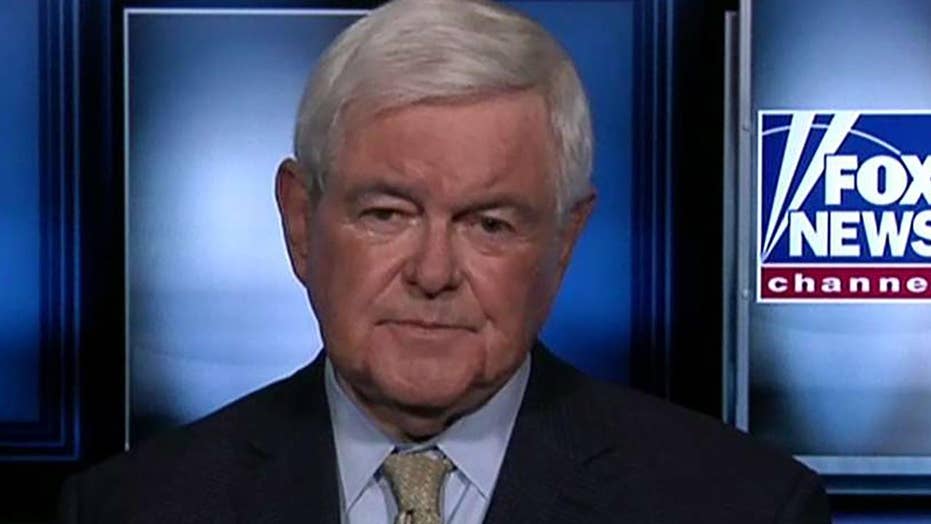 In 1994, Newt Gingrich led Republicans to one of the most stunning electoral victories in American history. Twenty-five years later he and his team reveal the inside story of how their Contract With America ended 40 years of House Democratic rule — and changed our politics forever.  The new special -- “Inside the Contract with America” – debuts on Fox News on September 29th at 8pm eastern. It is also available right now on FOX Nation.

Tuesday, when Speaker Nancy Pelosi declared, “no one is above the law,” her target was President Donald Trump – but she did far more damage to former Vice President Joe Biden.

Democrats are very excited by a few words in a phone call between the President of the United States and the new, reform-oriented anti-corruption President of Ukraine. Those words asked to open the investigation and to get at the truth.

Most Americans will ignore an attack on investigating corruption as just politics.

However, when Americans learn how deeply involved Hunter Biden was in China and Ukraine while his father was vice president, they will see a scandal involving a lot of money which is easy to understand and easy to condemn.

The Biden-Ukraine money problem is not something new. Five years ago, on May 14, 2014, The Washington Post headline warned: “Hunter Biden’s new job at Ukrainian gas company is a problem for U.S. soft power.”

Vice President Biden’s intervention to protect his son, and his son’s company Burisma, from a Ukrainian corruption investigation, was heavy-handed and amazingly arrogant. And there is no question that Biden interfered. In his own words to the Council on Foreign Relations on Jan. 23, 2018, Biden clearly pushed to have the prosecutor who was investigating his son fired:

“I was supposed to announce that there was another billion-dollar loan guarantee. And I had gotten a commitment from [former Ukrainian President] Poroshenko and from [former Prime Minister Arseniy] Yatsenyuk that they would take action against the state prosecutor. And they didn’t.

As Deroy Murdock, who is a member of the council, wrote for Fox News, “Biden’s actions reek of extortion and obstruction of justice.”

Now that the Hunter Biden corruption scandal is beginning to threaten his candidacy, Vice President Biden is trying to come up with a new story.

As Mark Thiessen wrote for The Washington Post and Fox News in his syndicated column on Tuesday, the former vice president is now claiming he never discussed his son’s business dealings overseas. As Thiessen points out, this claim is “flatly untrue.” Hunter Biden, has already told The New Yorker that Vice President Biden discussed the Ukraine business with his son, saying, “Dad said, ‘I hope you know what you are doing,’ and I said, ‘I do.’”

Again citing The New Yorker, Thiessen reported: “‘In December, 2015, as Joe Biden prepared to return to Ukraine, his aides braced for renewed scrutiny of Hunter’s relationship with Burisma. Amos Hochstein, the Obama administration’s special envoy for energy policy, raised the matter with Biden. That same month, The New York Times published an article about how Hunter’s business dealings in Ukraine undermined the vice president’s anti-corruption message, which quoted a Biden spokesman saying it had no impact.”

However, Ukraine is not the only site of scandalous self-enrichment by Hunter Biden. China is an even bigger center of money going to the former vice president’s son – money which would not have gone to him if his name had been Hunter Smith.

Peter Schweizer has become a remarkable researcher and writer about corruption. In a May, 11, 2019 New York Post article, he wrote extensively about the Bidens and China.

The investment firm Hunter Biden operated (along with former-Secretary of State John Kerry’s stepson Chris Heinz and their family friend and operative Devon Archer) in his dealings with China was Rosemont Seneca Partners, which formed in 2009.

By 2010, Hunter Biden and Archer “were in China meeting with top Chinese officials,” Schweizer wrote. By the way, Rosemont also partnered with the Thornton Group, which is led by James Bulger (the nephew of the infamous mobster James “Whitey” Bulger).

In 2013, Hunter Biden flew to China with his dad on Air Force Two. Within two weeks, Rosemont secured what eventually grew into a $1.5 billion private equity deal with a part of the Bank of China (which is owned by the Chinese Communist Party). So, as Schweizer put it, “the Chinese government-funded a business that it co-owned along with the son of a sitting vice president.”

Interestingly, Schweizer wrote that the Thornton Group only touted its China meetings on its Chinese language website, saying “Chinese executives ‘extended their warm welcome’ to the ‘Thornton Group, with its US partner Rosemont Seneca chairman Hunter Biden (second son of the now Vice President Joe Biden).’ The purpose of the meetings was to ‘explore the possibility of commercial cooperation and opportunity.’

One of these meetings between Hunter Biden’s company and Chinese officials happened on the same day Vice President Biden met with then-Chinese President Hu Jintao in Washington as part of the Nuclear Security Summit. And this was the rule rather than the exception.

As Michael Kranish and David L. Stern wrote in The Washington Post on July 22, for more than 20 years, Hunter Biden’s professional career has followed his father’s political career, “from Washington to Ukraine to China.”

Speaker Pelosi has raised the correct standard that in America no one is above the law. However, the person who may be found guilty by that standard is former Vice President Biden.