San Francisco set to spend $600,000 to paint over 83-year-old mural of George Washington

In his 1989 movie, “Indiana Jones and the Last Crusade,” Steven Spielberg has a remarkable scene of Nazi book burning. The looks of ecstasy as the actors-playing-Germans parade past Hitler and throw inappropriate books on the fire are compelling and convincing. These people are cleansing their society of past and future sins.

Of course, the real Nazis went much further through their attempt to physically cleanse their society of perceived impurities through a holocaust of the Jewish people, murders of minority groups, political prisoners, and the selective killing of Germans with genetic defects, and a maniacal sense of righteousness which remains horrifying to this day.

Unfortunately, the Nazi effort to destroy the past in search of a pure future is not an isolated event. 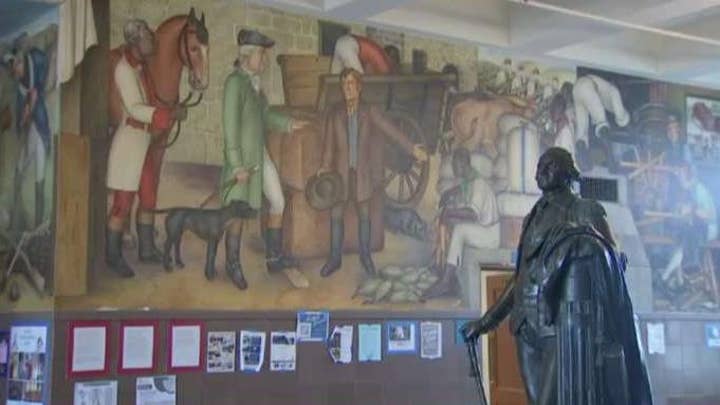 During the Reformation, militant Protestants destroyed art in Catholic churches.

The Soviets sought purity by establishing the secret police, banning books, turning churches into public restrooms, killing aristocrats, starving the middle-class farmers, and establishing their future utopia on a sea of blood.

The Chinese Communists persecuted Christians, Muslims, and Tibetan Buddhists. During Mao Zedong’s cultural revolution, they even went after their own communist leaders as impure.

Now, the spirit of fascistic book burning has entered the American system.

The spirit of fascistic book burning has entered the American system.

At the University of Notre Dame, the president has decreed that 12 murals depicting Christopher Columbus will be physically covered up to avoid offending Native American and African American students – only to be displayed “on occasion.” Pictures of the mural will be displayed at some undefined area of campus. Ironically, these murals were painted between 1882 and 1884 to help Catholic immigrants better understand their new country. So, now one of the most famous American Catholic universities will hide its own past instead of seeking to better educate people about it.

In San Francisco, the Board of Education has voted to spend $600,000 painting over a 13-panel, 1,600-square-foot mural called “Life of Washington” at George Washington High School (just guess what will eventually happen to the name of the school with the new fascists in charge).

Ironically the mural of Washington’s life was painted in 1936 by a Stanford University art professor named Victor Arnautoff. He had migrated from Russia and was a devout communist. He was the Bay Area’s most famous painter in the social realism school, which included the famous Mexican painter Diego Rivera. Arnautoff painted the “Life of Washington” with slaves and a dead native American precisely to show that George Washington was not perfect and that there were deep problems with the Founding Fathers that historians had ignored.

Even more ironically, this painting was part of President Franklin Delano Roosevelt’s Works Progress Administration effort to get money to painters and artists during the Great Depression.

So, now a Russian-born communist professor at Stanford, who was paid by the federal government, is no longer acceptable to the new fascists on the San Francisco school board.

Meanwhile, the two most famous San Francisco politicians – Speaker Nancy Pelosi and Senator Kamala Harris – have so far said nothing.

These efforts to erase our past and hide or destroy our artistic heritage are in the tradition of Spielberg’s depiction of Nazis burning books in Hitler’s Berlin.

It is time to be direct and honest about the unacceptability of fascism in its American form wherever it shows its ugly face of hatred.