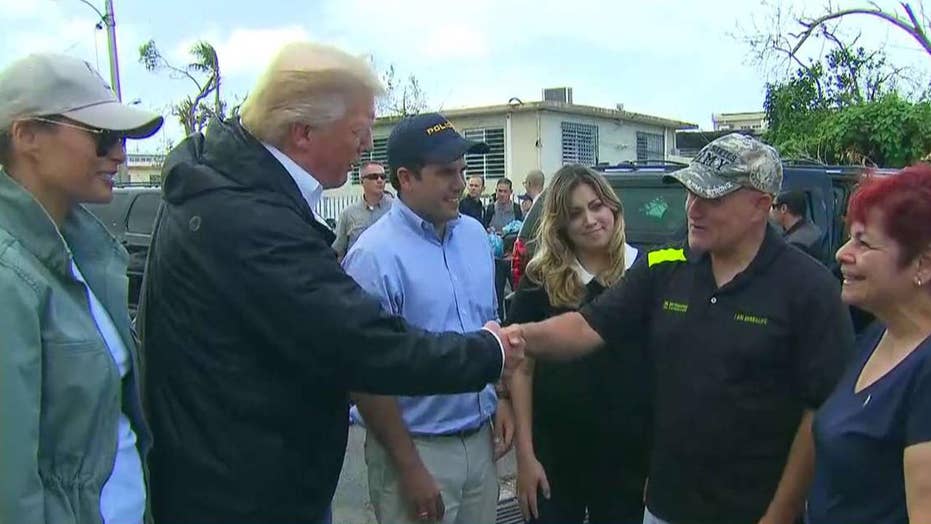 To help the people of Puerto Rico, the United States should think of its job in two phases.

Phase one is to solve the immediate crisis.

Currently, the island is crippled. Days before Hurricane Maria, Hurricane Irma had already knocked out electricity for 1 million Puerto Ricans. Then, Maria's 165 mile-per-hour winds, combined with one day of rain so heavy it equaled three days’ worth of rainfall in Houston's extraordinary storm experience from Hurricane Harvey, simply devastated the island.

The collapse of services in Puerto Rico also creates a potential migration crisis that could rob the island of a generation of talent.

The combined impact of these two hurricanes has caused some of the most thorough destruction any American community has ever experienced.

Eighty percent of the island’s electrical transmissions system has been destroyed. The collapse of the electrical grid has compounded every human need. There is a real danger that the loss of refrigeration and clean water will lead to a dramatic spread of disease across the island.

Puerto Rico is experiencing the kind of collapse Bill Forstchen wrote about in his book One Second After. The novel describes the aftermath of an electromagnetic pulse attack, which destroys the U.S. electrical grid.

One good thing that could come from Puerto Rico’s experience may be a much greater investment in hardening the island’s power infrastructure against an EMP, caused by either a foreign attack or a natural solar event. Another good result could be a realization of how vulnerable the entire United States electricity grid is to an electromagnetic event.

The magnitude of eroded highways, collapsed bridges, weakened dams, and other infrastructure damage is historic and will take an enormous effort to overcome. For example, more than 90 percent of the telephone cell towers were knocked out by the storm.

Washington is only now beginning to realize how much bigger and more aggressive the first phase of recovery and response must be. More military assets must be deployed and more emergency engineering will have to be implemented to avoid further problems in the next 30 to 60 days.

The collapse of services in Puerto Rico also creates a potential migration crisis that could rob the island of a generation of talent. Faced with such destruction, many Puerto Ricans will exercise their rights as American citizens to move to the mainland. This would accelerate an already growing trend. From 2005 to 2015, about 446,000 Puerto Ricans moved to the mainland – about 13 percent of the island’s population.

The longer the crisis goes on, the greater the loss of talent will be.

Even if we can quickly solve the immediate problems, the average Puerto Rican may still conclude that life on the post-hurricane island will be inadequate. This would further devastate the island and its future. We must convince the most energetic, ambitious, and competent younger Puerto Ricans to stay and invest their lives in their home island by ensuring a dramatically better future.

That is why the recovery and survival effort must be immediately followed by phase two: "Creating a 21st Century Puerto Rico."

The federal government is going to have to invest a lot in Puerto Rico's recovery. The scale of devastation requires a massive rebuilding program.

The key to Puerto Rico's future is to avoid rebuilding obsolete, old infrastructure and instead investing money in a new, modern, 21st century Puerto Rico. This will increase economic growth and improve quality of life on the island.

The Trump administration is in a perfect position to develop and implement a 21st century infrastructure program for Puerto Rico.

All the work the administration has done in thinking through its infrastructure plan, its economic growth agenda, and its vocational education and training plans for the mainland can be brought to bear to develop a plan for 21st century Puerto Rican prosperity.

A 21st century investment plan should:

1. Implement deregulatory reforms which will enable government and private contractors to cut through red tape and save time and money, while securing Puerto Rico's future prosperity;

3. Rebuild the electric grid with resilience, so it can survive both future natural disasters and potential EMP events. Once the system is completed, the administration should grant long-term concessions to the private sector under a payment mechanism to reimburse the federal taxpayers and ensure long-term modernization and performance;

4. Create a broadband network for the entire island, so every Puerto Rican can have access to high-speed internet for education, shopping, and work. The administration should examine space-based and other broadband systems being developed for large, rural areas;

5. Develop an island-wide health system. The administration should seek help from the best large mainland health systems (including the U.S. Department of Veterans Affairs) to help develop a system to modernize the hospitals, integrate community health systems, and use telemedicine and other modern delivery systems so even the most remote communities are served;

6. Use cutting edge technologies to create smart city solutions to improve connectivity and modernize the island’s cities and towns;

9. Apply the Trump administration apprenticeship, vocational education, and online learning initiatives to help the Puerto Rican work force acquire the knowledge and skills needed to do the jobs the enterprise zone status will bring to the island.

These are examples of the kind of forward-looking initiatives that would give Puerto Ricans hope that their island will bounce back as an exciting desirable place to work and live.