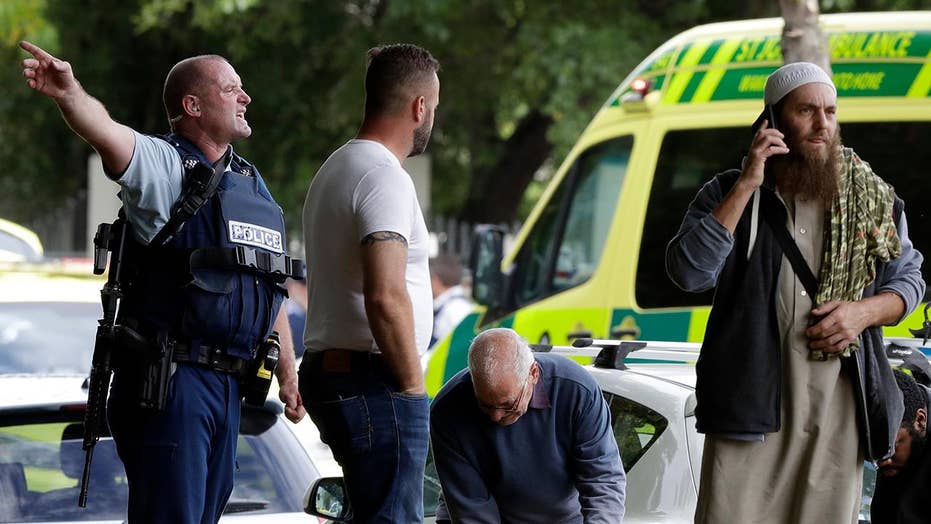 New Zealand gunman walked back through mosque to kill wounded

The massacre at two New Zealand mosques on Friday, which claimed the lives of at least 49 people, was doubly shocking.

First, it was an unspeakable desecration of houses of worship and tragic loss of life designed to horrify the faithful worldwide. And second, it was a live-streamed terrorist attack designed for and enabled by modern social media platforms including YouTube (owned by Google), Twitter and Facebook.

What responsibility do these platforms and their users – all of us – have for such attacks?

People commenting on the cable news channels were quick with their hot takes. Some on CNN and MSNBC spent hours of airtime imputing this far-away murder spree to President Trump’s influence. They ignored the fact that the recent U.S. spate of mass shootings at houses of worship got its grisly start during the Obama administration.

Notable and tragic examples include the shooting deaths of nine African-Americans at a church in Charleston, S.C., in 2015 and the Oak Creek, Wisc., massacre that claimed the lives of six Sikh worshipers and injured four in 2012.

President Obama wasn’t to blame for the Charleston or Oak Creek murders any more than Trump – or any other world leader – is for the New Zealand mass shooting.

But we have seen a disturbing trend in recent school, church and other mass murders. The rise of social media and the ability to live-stream an attack give sick killers an added incentive to do their deeds with a huge, international audience of transfixed viewers. And there is no intermediation to soften the blow.

He knew that with a few clicks he could set in motion an orchestra to amplify his misdeeds, with corrosive aftershocks for weeks and months to come.

The rise of social media and the ability to livestream an attack gives sick killers an added incentive to do their deeds with a huge, international audience of transfixed viewers. And there is no intermediation to soften the blow.

Mainstream media figures recklessly took the bait and ran, breathlessly, to the airwaves to spread the divisive message. It was mere hours before Rep. Alexandria Ocasio-Cortez, D-N.Y., posted a series of poisonous tweets. She pointed blame at the president’s immigration policies, the National Rifle Association and the rise of white supremacy for the attack.

Only a killer is responsible for his crimes. But our cultural obsession with social media and our politicians’ instincts to let no tragedy go to waste exponentially amplified the horror.

Not every mass murderer is choosing to commit crimes with premeditated streaming. For example, it took days to piece together information about the gunman who murdered 58 people and wounded more than 400 in Las Vegas back in 2017.

But some killers are turning to social media to boast about their terrible crimes. As a technology-obsessed society, we must examine whether our insatiable appetite for stimulation provides an impetus for these killers to commit murders in the most public and shocking way possible.

Even though Facebook took down New Zealand videos after being informed by users of the situation, it took nearly 20 minutes to do so. And even afterward, clips of the attack were circulating on various social media platforms and likely still are.

It's puzzling that Facebook, Twitter and Google’s YouTube appear impotent to stop the spread of viral images of crimes being committed before our eyes, though in recent years they have become more active in trying to shut down self-harm and suicide videos.

In contrast, these social media companies have now finely honed the art of censoring entirely legal speech uttered by conservative writers and organizations.

Google has designed very sophisticated video processing software to implement its censorship goals and to halt intellectual property theft. Yet it can’t shut down the sharing of mass crimes, including mass murder?

And YouTube was not alone. Facebook, Twitter, and 8Chan all hosted various forms of the New Zealand attack – uncensored – while at the same time censoring all manner of lawful speech.

Google has designed very sophisticated video processing software to implement its censorship goals and to halt intellectual property theft. Yet it can’t shut down the sharing of mass crimes, including mass murder?

YouTube’s instant video processing is what makes its videos so easy to search and find on dominant search engines. As a result, a crime impacting a distant country becomes ubiquitous with a few clicks.

Some are calling for more social media censorship in the wake of this attack. But prior restraint is not the answer, nor is banning legal speech.

There can be no dispute, though, that the type of crime we saw streamed on Facebook is not protected speech. The social media giants – with their near-infinite resources and demonstrated ability to use technology to filter content – must do better at shutting down images of a violent crime while it's underway.

At the same time, members of the public must do their part by refusing to click on, share or even describe the horrifying images.

Taking away a voyeuristic audience will never put an end to the evil that causes some individuals to take others’ lives. But it will decrease much of the upside for psychopaths if they know they'll be removed from social media platforms before their hateful messages can horrify the world.