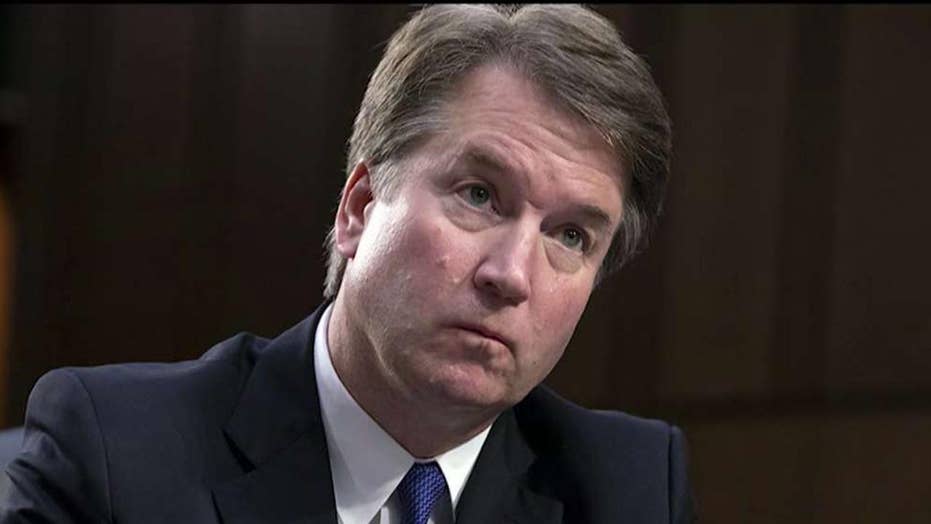 A 414-page majority report on the allegations against Brett Kavanaugh released by the Senate Judiciary Committee may further outrage Republicans on the eve of the midterms; Doug McKelway reports.

When you go to the polls Tuesday remember Supreme Court Justice Brett Kavanaugh. Kavanaugh was confirmed to the court just one month ago but in the political universe it’s already several news cycles and a lifetime ago.

Before you fill in a bubble on your ballot — remember the liberal machine’s heavily orchestrated campaign to destroy an honorable man by any means necessary.

Remember Senate Minority Leader Chuck Schumer’s, D-N.Y., words, “I will oppose him with everything I’ve got.” The Democrats made good on Schumer’s pledge and they almost succeeded in destroying him — almost.

AFTER THE MIDTERM ELECTIONS, FEUDING AND FIGHTING IN WASHINGTON ARE GUARANTEED TO CONTINUE

Remember that Sen. Diane Feinstein, D-Calif., received a letter outlining sexual assault allegations by Dr. Christine Blasey Ford in July, and didn’t bother to share this information until right before the Senate Judiciary Committee was to vote on Kavanaugh’s nomination in September? During that time Feinstein met privately with Kavanaugh and wasn’t disturbed enough to question him about the allegations.

Remember how major details like the time or place the alleged assault took place, as well as other key details were missing from Ford’s testimony? Remember how she offered no actual proof of sexual misconduct and how all the other people she named in her letter contradicted her statement?

Remember how numerous women across the political spectrum who have known Kavanaugh throughout his life, both professionally and personally, attested to his character? They included female law clerks, women he dated in high school and college, the mom of a girl he coached in basketball, and an open letter from 65 women he knew in high school.

Remember this when you go to the polls: The Senate Judiciary Committee released a report this weekend clearing Supreme Court Justice Brett Kavanaugh of multiple sexual misconduct allegations. The committee’s chairman Sen. Chuck Grassley, R-Iowa, said in a statement, “This was a serious and thorough investigation that left no stone unturned in our pursuit of the facts. In the end, there was no credible evidence to support the allegations against the nominee.”

Remember how Democrats used Ford when it looked like she was their only hope of defeating Kavanaugh and then dropped her when she was of no use to them anymore?

Ford wanted to remain anonymous, yet somehow her letter leaked to the media. Since Feinstein never bothered to pursue a private investigation, there were very few people who supposedly knew about the letter.

The process of elimination says the letter was likely leaked by either Feinstein’s office, Rep. Anna Eshoo’s, D-Calif., office, where the letter was originally sent, or Ford’s lawyer, who coincidentally (or not) was recommended by Feinstein. Why would they leak the letter if they were trying to protect her?

Remember when you go to the polls Tuesday that in the wake of Kavanaugh’s confirmation vote, Ariel Dumas, writer for “The Late Show with Stephen Colbert” tweeted, “Whatever happens, I'm just glad we ruined Brett Kavanaugh's life.”

She gave us a very telling page out of the liberal playbook. If they couldn’t defeat Kavanaugh with everything they’ve got then they’d at least celebrate destroying his life. This perverse way of thinking is nothing short of pure evil.

Remember this when you go to the polls: The Senate Judiciary Committee released a report this weekend clearing Supreme Court Justice Brett Kavanaugh of multiple sexual misconduct allegations. The committee’s chairman Sen. Chuck Grassley, R-Iowa, said in a statement, “This was a serious and thorough investigation that left no stone unturned in our pursuit of the facts. In the end, there was no credible evidence to support the allegations against the nominee.”

The committee recently referred four people to the Department of Justice for criminal investigation. Among them is Judy Munro-Leighton, who accused Kavanaugh of raping her but then admitted she was lying because she was upset.

Munro-Leighton never even met Kavanaugh in person and — surprise — she’s a left-wing activist.  She described her actions a "just a ploy,” and said, ”I was angry.”

When most people are angry they go for a run or squeeze a stress ball. They don’t set out to purposely destroy a man’s life — his family, his career.

This malicious behavior is what you need to remember when you go to the polls on Tuesday.

The committee also referred Julie Swetnick, and her attorney Michael Avenatti, for investigation after Swetnick gave an NBC interview where she contradicted a sworn statement accusing Kavanaugh of sexual misconduct. You may remember Swetnick’s ex-boyfriend came out and said he had to get a restraining order for her because she went after his wife and their baby. Not exactly a glowing example of credibility to begin with.

The fourth referral was a man who retracted a statement he made accusing Kavanaugh of sexually assaulting a woman in 1985 on a boat in Rhode Island.

The “Late Show’s” Dumas and her liberal friends will have to put the cork back in their champagne. Turns out they didn’t ruin Kavanaugh’s life or reputation after all. With each new revelation of Kavanaugh’s accusers, he’s being vindicated.

When you walk into your voting booth Tuesday remember just what Democrats are capable of — remember Kavanaugh.