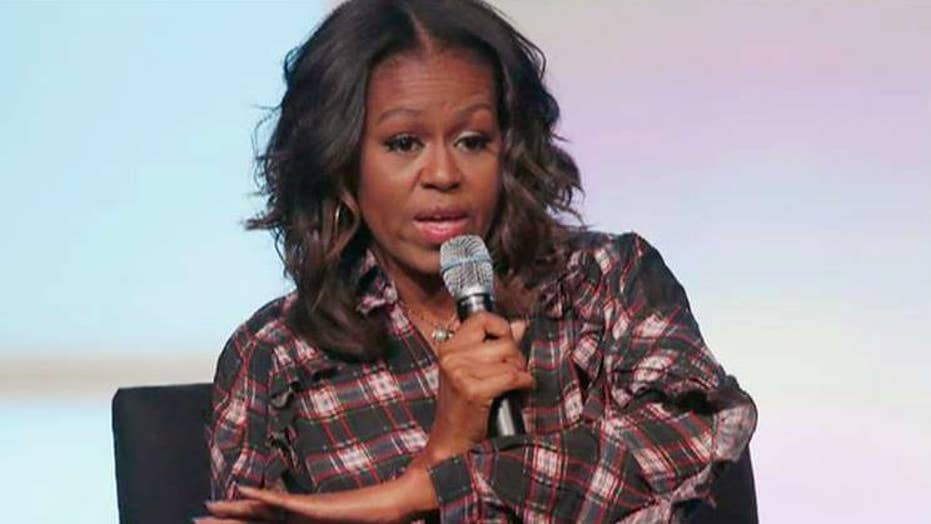 Michelle Obama takes on Trump in her new memoir 'Becoming'

First ladies are often much more popular than the presidents who are their husbands. The presidential wives aren’t the ones who chose to run for office or live in the spotlight, yet they carry the burden and responsibility of being in the public eye almost as much as the president.

First ladies are expected to be everything to everyone, much like many modern American women. But at the same time, they are expected to effortlessly exhibit the traits of the perfect wife, perfect mother, perfect hostess, perfect advocate and perfect ambassador for our nation’s values.

That can be a lot of pressure – and frankly, we all know that no one is perfect. Yet as Americans and consumers of popular culture, we choose to buy into the myth that those in the public eye, including first ladies, are somehow superhuman.

Former first lady Michelle Obama’s new memoir, “Becoming,” captures the struggle to balance the public and private self. Lauded for her candor about her marriage and fertility challenges, Mrs. Obama is giving interviews and will go on worldwide arena tour to publicize her book, which is already getting heavy media coverage.

This cover image released by Crown shows "Becoming," by Michelle Obama, available on Nov. 13. Obama is launching a book tour to promote her memoir "Becoming," a tour featuring arenas and other performing centers to accommodate crowds likely far too big for any bookstore. (Crown via AP)

I for one am glad that Michelle Obama is opening up on issues that most women struggle with in silence, even if they are not famous. She is showing she is one of us.

By speaking out on things like marriage counseling and in vitro fertilization, Mrs. Obama is lifting a stigma around these sensitive and intimate topics. In the same way, years before first lady Betty Ford shined a light on alcoholism – a disease deeply taboo for a woman, not to mention a first lady, to discuss in public.

Betty Ford and Michelle Obama may be drastically different people, but they both used their public personas to speak their private truths.

The question I have is: Why did both wait until they were no longer living in the White House?

Betty Ford sought treatment for alcohol and medication dependency in 1978 and the Betty Ford Clinic opened in 1982. Michelle Obama chose to bare her secrets two years after her husband’s term was over.

If these women were brave enough to share their vulnerabilities with millions, why not do it while still the sitting first lady? I think the answer lies in our society’s double standard towards those in positions of power, especially in the political sphere.

We have a perception that it would be in poor taste for a first lady to speak of personal details like fertility or addiction. Acknowledging a personal struggle also opens one up to public scrutiny that could even cause a presidential candidate to lose an election.

Hopefully, as time passes, our future first ladies will feel more comfortable to share their challenges while they are in the White House. Ultimately, it is each first lady’s choice how public to be with her private burdens, but I think the more people are brave when they are in power, the more they will empower others to do the same.

When political figures constrain their authenticity, it propagates an environment where being fake is expected. But it works both ways, too. The American public must also become more accepting of our public figures as human beings who are less than perfect.

At a time where our nation is so polarized, I think Michelle Obama’s memoir, and it’s timing, can serve as a teachable moment. Her story can remind us that we are all human, regardless of race, ethnicity, gender, economic status or political affiliation.

And behind the curtain of every celebrity is a real person with a real family, real feelings, and real struggles. Next time you think about sending that nasty tweet about someone you have never met, try to remember that.

We are all the same. We all deserve respect. We all have a private challenge, even if you don’t know about it. Let’s be kind to one another.