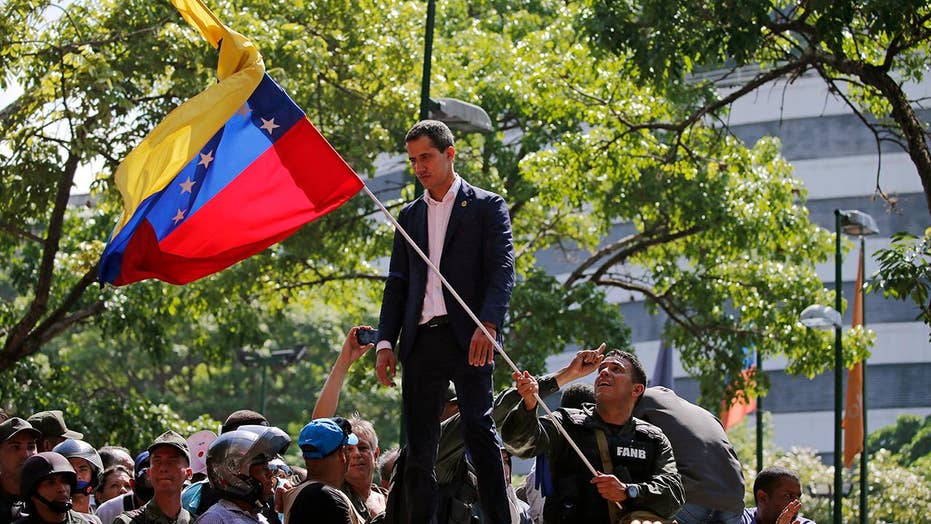 Clashes continue in Venezuela as US backs Guaido's calls for liberation

The already ruined nation of Venezuela descended further into chaos this week. Opposition leader Juan Guidó has called on the military to overturn the leftist regime of Nicolás Maduro. The government has blocked CNN from the nation’s airwaves. Every storm cloud has a silver lining.

Doctors have treated at least 50 injured demonstrators, including one woman shot in the abdomen. A military tank crushed protesters attempting to flee. Amnesty International reports a systematic policy of repression throughout the country, including widespread extrajudicial executions.

More than one-third of Venezuelans eat just one meal per day. “We eat what people give us,” one desperate mother of three explained to the Miami Herald. “My husband works as a watchman, but his salary is not enough to buy food. We have gone up to two days without eating.” So she waits with hundreds of other hungry Venezuelans in breadlines at her local church.

FORMER VENEZUELAN U.N. DELEGATE: 'THIS IS A POINT OF NO RETURN'

Since the re-election of Nicolás Maduro in 2018, inflation in Venezuela has spiked to 1.3 million percent. Tragically, it didn’t have to be this way. For most of the 20th century, Venezuela was the richest country in South America. Today its people eat rats and dogs in the streets.

More than any other factor, socialism destroyed Venezuela. After taking power in 1999, socialist Hugo Chavez relied on the nation’s abundant oil revenues to purchase political support. He bought foreign food and sold it to the people at a discount, ultimately quadrupling Venezuela’s foreign debt. Chavez’s unsustainable spending led him to gradually to seize more political power. He “nationalized” – that is, stole – hundreds of factories, farms, and companies, leading Exxon Mobil and ConocoPhillips, among many other firms, to quit the country. He outlawed private gun ownership in 2012, leaving Venezuelans powerless to fight back against an increasingly tyrannical government.

By the time Chavez’s hand-picked successor Nicolás Maduro took over in 2013, the economic and political poison had run its course, and the bill for all that “free” stuff finally came due. A drop in oil prices meant the government could no longer maintain even the pretense of solvency. But rather than admitting the failure of socialism, Maduro doubled down and began to print more money, sparking hyperinflation. When the impoverished citizenry revolted, the regime resorted to violence.

Venezuela ought to serve as a lesson for the rest of the world on the perils of socialism. Unfortunately, many Americans refuse to heed the warning. According to Gallup polling, most young Americans hold a positive view of socialism, compared with just 45 percent who look favorably upon capitalism. Avowed socialists such as 2020 hopeful Sen. Bernie Sanders, I-Vt., and Rep. Alexandria Ocasio-Cortez, D-N.Y., have risen to become leaders of the Democratic Party. They promise their policies are nothing like the laws that wrecked Venezuela but instead merely resemble the welfare programs of Nordic states such as Sweden, Iceland, and Denmark.

As ever, the socialist politicians lie. Just one policy they propose, the Green New Deal, calls for a federal takeover of whole industries while simultaneously outlawing virtually all modes of transportation, roughly 90 percent of the American energy industry, and even the right to keep one’s own home. By contrast, the Nordic nations they cite enjoy relatively free economies. None have minimum wage laws. Sweden offers families universal school choice through vouchers that may be used to attend regular government-run schools, charter schools, or even for-profit private schools. Iceland ranks higher than the United States on the Heritage Foundation’s Index of Economic Freedom.

Former Danish prime minister Lars Løkke Rasmussen rejected the comparison outright. “Some people in the U.S. associate the Nordic model with some sort of socialism,” he explained. “Therefore I would like to make one thing clear. Denmark is far from a socialist planned economy. Denmark is a market economy.”

For American socialists, utopia looks like Venezuela. Bernie Sanders didn’t honeymoon in Denmark or Sweden. On the day after his wedding in 1988, Bernie and his new bride set off for their honeymoon in the Soviet Union. Three years before that romantic getaway in the world’s most repressive regime, Bernie praised breadlines in Latin America. "It’s funny, sometimes American journalists talk about how bad a country is because people are lining up for food,” he observed. “That is a good thing! In other countries, people don’t line up for food. The rich get the food and the poor starve to death.”

Before socialism ruined their country, Venezuelans ate well. Today they starve while their government flattens them with tanks. Horrified onlookers should note the relative costs of free stuff and freedom.