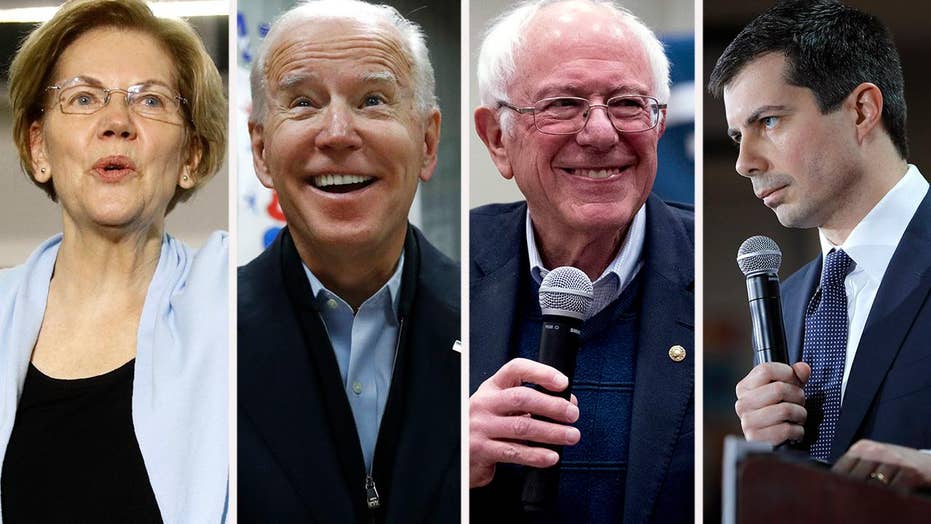 Buttigieg, Biden, Sanders and Warren are all in the running to win the Granite State.

There is an old saying in politics that Iowa picks corn and New Hampshire picks presidents. New Hampshire voters will have their chance to do just that Tuesday.

When New Hampshire voters render their verdict the rest of the country starts to pay attention to the presidential race. This year the chaotic Iowa caucus places a premium on New Hampshire, which historically plays one of two roles: it rockets the winner in Iowa onto the nomination, running the table of the contests that follow, or re-sets the race by pumping the brakes on the victor in Iowa.

What it doesn’t change is New Hampshire’s ability to reveal something about the next president, win or lose, that foreshadows their performance in the White House.

NOVAK & ROONEY: THERE HAS TO BE A BETTER WAY TO CONDUCT PRESIDENTIAL PRIMARIES

Bill Clinton was confronted with the allegations of an affair that threatened his candidacy and resulted in his impeachment for one. George W. Bush’s shaky campaign performance, where he seemed over his head and overly reliant on others, repeated itself in the White House when he led the nation into two disastrous wars based on the advice of Dick Cheney. Barack Obama came out of Iowa like a comet with all the confidence such a phenomenon possesses and that trait was often on display during his presidency.

This year, Democrats are wrestling with whom to nominate to beat Trump, which is the one thing that unites the party. And the top three finishers in Iowa — Bernie Sanders, Pete Buttigieg and Elizabeth Warren — are expected to repeat in New Hampshire. The question is who wins?

Unlike Iowa there is no gold standard New Hampshire poll and therefore no good empirical evidence. Many of the same pollsters who had Joe Biden winning or in the top three in Iowa are at it in New Hampshire. Bad polls lead to bad media coverage and there’s no shortage of both in this race. In addition, tracking polls are being reported daily as the definitive state of the race when they are volatile, have large margins of error, and should only be used to see a trend line over seven to 10 days not breathless breaking news daily.

Nevertheless, let’s look at the top tier in New Hampshire.

Four years ago, Sanders won the New Hampshire primary by 22 points over Hillary Clinton. The outsider, an anti-establishment neighbor from Vermont, trounced his opponent and unleashed a contentious primary battle that lasted through November, even though he lost the nomination in March.

Sanders talks about his campaign turning out the most voters. It wasn’t true in 2016 and it’s not true today. In fact, the turnout in Iowa was close to 2016. Furthermore, Sanders got fewer votes last week than he did in 2016 in his narrow loss to Clinton. While it is possible Sanders wins in New Hampshire this week it won’t be by 22 points. That leaves the impression he isn’t doing as well in this race as he did in the last one and that doesn’t inspire confidence in November against Trump.

Elizabeth Warren got the third ticket out of Iowa, but you wouldn’t know it from the media. All the coverage focused on the fight for first between Sanders and Buttigieg and the fourth-place finish by Joe Biden.

Buttigieg was the surprise in Iowa. The question is will New Hampshire reward or restrain him? Despite the lack of a winner declared last week Buttigieg got a bump and momentum for his surprise finish in much the same way Obama did in 2008. But there’s no guarantee you maintain it, as Obama found out in New Hampshire.

In the debate Friday night, Buttigieg was targeted by other candidates, which exposed his discomfort when challenged. He bristled when questioned about race and confronted with the facts about his tenure as mayor. It’s not the first time. But it was the most high-profile time. Is Buttigieg ready for the scrutiny that comes with being a front runner? New Hampshire voters will consider this trait as they cast their ballots.

Warren got the third ticket out of Iowa, but you wouldn’t know it from the media. All the coverage focused on the fight for first between Sanders and Buttigieg and the fourth-place finish by Joe Biden. No one had a better organization in Iowa than Warren and most would say the same about New Hampshire too. At minimum Warren needs another top-three finish and if she’s third it needs to be a fingernail finish behind second place to continue her momentum.

The fact is New Hampshire elects women. It’s two U.S. senators, one member of Congress, the mayor of Manchester, and many members of the state legislature are women. It should be an advantage for Warren and one she needs to capitalize upon, in addition to her organization, to stay in the top three for the remaining contests.

Two other candidates to keep in mind: Biden and Amy Klobuchar. The former vice president will do just as poorly in New Hampshire as he did in Iowa and perhaps worse. His campaign organization is nearly non-existent and his performance has been sub-par too. Klobuchar, who had a good debate performance and appearance at the 100 Club Dinner Saturday night, could be a surprise but it may be too little too late.

Of course, there could always be a surprise … it’s New Hampshire, which famously decides late. Adding to the volatility, 42 percent of New Hampshire voters are Independents who can vote in the Democratic primary and will because there is no real contest on the Republican side.

With 40 hours until the polls close there are three people to watch: Sanders, Buttigieg and Warren. If Sanders or Buttigieg win New Hampshire may be sending them on their way to the nomination. If Warren wins it resets the race.

New Hampshire will have its say soon and the country will take note, just as it has for the past hundred years.