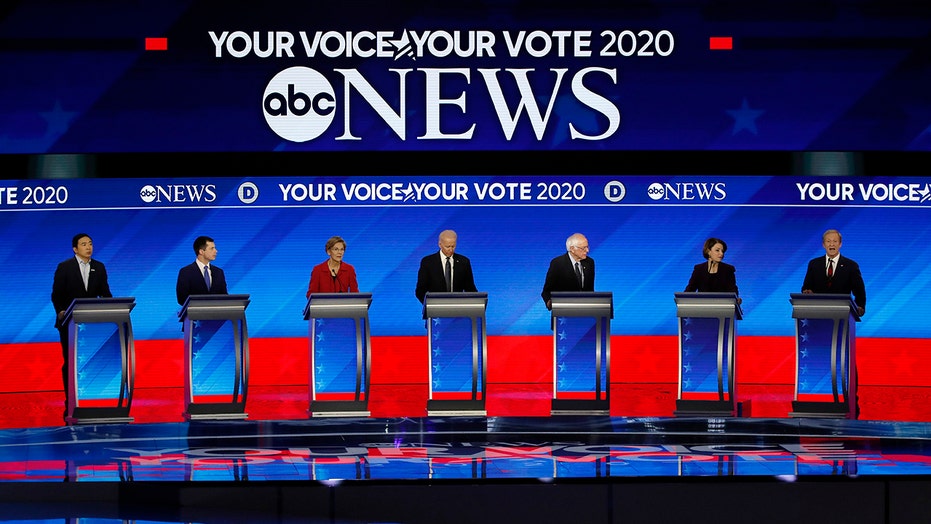 The Democratic party elected some of history’s greatest presidents, from Andrew Jackson to John F. Kennedy.

Unfortunately, not one of the party’s 2020 presidential candidates measures up. Least of all Michael Bloomberg. He was absent altogether from the Democratic presidential debate in New Hampshire yet by saying nothing he gave the best answers. The rest of the party failed under a key metric of presidential decision-making: the Truman test.

“He alone, in all the world, must say Yes or No to that awesome, ultimate question,” said President Harry S. Truman, a Democrat, referring to his decision to detonate nuclear weapons over Japan, ending World War II.

NOVAK & ROONEY: THERE HAS TO BE A BETTER WAY TO CONDUCT PRESIDENTIAL PRIMARIES

Nobody on the debate stage could even match President Donald Trump for decisiveness, let alone Truman.

Debate moderator David Muir invited the candidates to compare themselves to Trump. He asked whether they, too, would have authorized Trump’s two-birds-with-one-drone strike against the Iranian terrorists Qassem Soleimani and Abu Mahdi al-Muhandis.

“If your national security team came to you with an opportunity to strike, would Soleimani have been dead, or would he still be alive?” asked Muir.

“It depends on the circumstances, it depends if there was an alternative, it depends on what the different effects would be,” said Pete Buttigieg. He promised to “read the intelligence, pay attention to the international security situation, consult our allies,” etc.

President Truman kept a sign on his desk in the Oval Office that said, “The buck stops here.”

Muir then asked Vice President Joe Biden, “Would you have ordered the strike?”

“No, and the reason I wouldn’t have ordered the strike: there is no evidence yet of imminent threat that was going to come from him,” said Biden.

For evidence, Biden should look at the graves of the 600 American soldiers whom Soleimani killed in his years-long campaign against the United States.

The question of “imminent threat” is a red herring. But of course Biden would play such semantic games. He and President Barack Obama routinely spoke in euphemism.

And ransom for hostages became “resolving a financial dispute” when Obama paid it to the violent extremists in Tehran, who employ man-caused disasters to commit workplace violence against the United States, notwithstanding our disposition matrix in the overseas contingency operation.

Unlike in business, the president cannot outsource America’s national security. A strategy that depends on “interaction with other countries” is doomed to fail.

Ignoring North Korea exemplified “strategic patience.” Fighting a war in Libya meant “leading from behind.” Leading from behind devolved into “kinetic military action.” Threatening kinetic military action was just “coercive diplomacy.” Coercive diplomacy translated into “a red line” against chemical weapons. Behind the red line was — nothing at all. Euphemism for leadership.

In fact, Sanders would have directly opposed Truman. The Truman Doctrine committed the United States to fighting communism worldwide. It defined American foreign policy for the rest of the century.

Sanders, on the other hand, is a self-described socialist who undermined America’s anti-communist foreign policy for decades. He even honeymooned in the Soviet Union, yet refused to meet communism’s most famous dissident, Nobel laureate Aleksandr Solzhenitsyn, even though they lived within driving distance from each other in Vermont.

Sure, Sanders calls himself a democratic socialist. Likewise, the Soviet Union was technically the “Union of Soviet Socialist Republics” and North Korea remains “The Democratic People’s Republic of Korea.”

So of course Sanders cannot tell America’s allies from its enemies. At the debate, he lumped Saudi Arabia, a U.S. ally, into the same category as adversaries like Kim Jong Un, Vladimir Putin and Xi Jinping.

Meanwhile, billionaire hedge fund banker Tom Steyer would apply the business strategies of marketing and outsourcing to America’s national security. “Barack Obama used diplomacy to get Iran to give up its nuclear ambitions in return for our releasing economic sanctions along with our partners around the world,” he said.

But the Iran deal was puffery, and a bait-and-switch marketing trick. Like day traders, the U.S. and its allies paid upfront, hoping Iran’s promises would earn dividends later. And the deal represented a failure of salesmanship: Obama never succeeded in ratifying it as an actual treaty.

For Iran, however, the deal was yellowcake: it let Iran keep its terror and have nukes, too.

In any case, Steyer believes nuclear weapons are not even as dangerous as global warming. “The biggest problem that we face internationally in the world is climate change,” he said.

And yet Steyer’s buck stops with everyone else. “It can only be solved with diplomacy and allies and interaction with other countries,” he said.

Unlike in business, the president cannot outsource America’s national security. A strategy that depends on “interaction with other countries” is doomed to fail. Though it might enhance Steyer’s fortune in the meantime.

So far in the Democratic primary race, only one moment is faithful to Truman.

On Feb. 3, Iowa Democrats bungled their nomination contest. Buttigieg declared himself the winner “before a single vote was officially reported.” Yet Sanders actually won the most votes by a large margin of victory.

Similarly, on Nov. 2, 1948, the Chicago Tribune falsely called the results of the national presidential election. “Dewey Defeats Truman” read the front-page headline. Two days later, Truman posed for a photograph with  it. To this day the headline remains an icon of fake news.

The difference is that in 1948 the actual winner was immediately clear. In Iowa, on the other hand, no candidate can be called the winner.