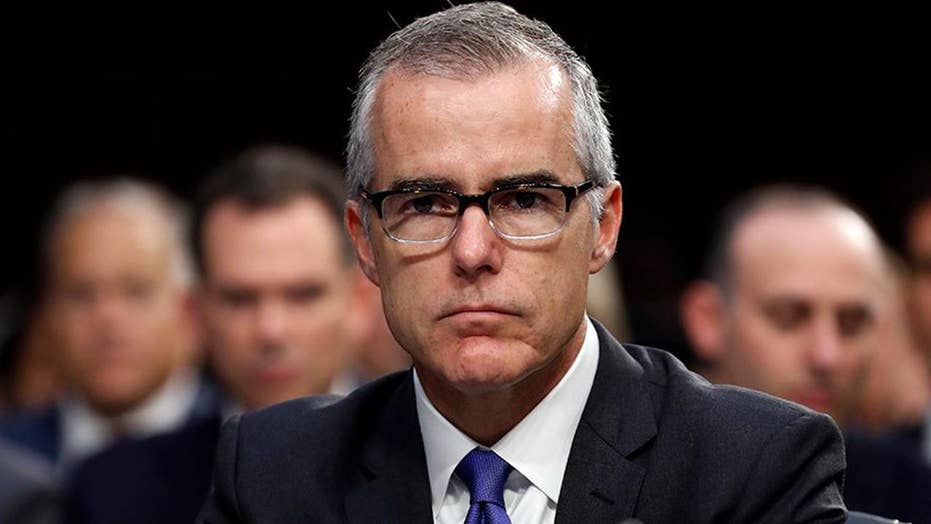 The most egregious anti-democratic actions ever taken by the what can now fairly be called the Deep State are confirmed with the publication of fired FBI Deputy Director Andrew McCabe’s new book detailing how the FBI and Justice Department plotted to remove President Trump from office for firing FBI Director James Comey.

Justice Department and FBI officials spied on U.S. citizens with false warrants, gave a pass to one presidential campaign with a predetermined investigation, investigated another political campaign on the basis of no verified evidence, and illegally leaked information on investigations. They discussed wiretapping and using the 25th Amendment to the Constitution to remove President Trump, and appointed a special counsel as a retaliatory move for Comey’s firing.

It is now crystal clear that the highest echelons of the Justice Department and FBI had morphed from the world’s most professional law enforcement organization into a Third World rump group. They had the hubris to believe that they – not the American people or their duly elected representatives – should decide who governs and how.

They upended our election process, fanned partisan political flames, distorted our foreign policy by isolating us from Russia, and abused the powers of their office.

Remember that McCabe, Comey and the intelligence community heads all publicly testified to Congress even after the Comey-Trump meetings and memos that no investigation had been tampered with in any way. None.

Yet upon President Trump’s firing of Comey, the remaining officials didn’t wait for the proper appointment of a new FBI head. Instead, they worked themselves up into an unfounded hysteria and acted to create an independent counsel over obstruction that never happened – and was never happening.

McCabe said he was concerned that the Russia investigation might be snuffed out – but it wasn’t. It was untouched. You need a crime to appoint a special counsel, not a belief that a crime might be committed sometime in the future.

Had FBI officials waited for a new director to be confirmed by the Senate, they might have had a new boss who looked over the Foreign Intelligence Surveillance Act (FISA) warrants and discovered that the key evidence for them was an unverified dossier from a fired source who had materially lied to the FBI.

Officials might have discovered that the supporting Yahoo News story was actually an echo created by their source and not independent evidence. The new FBI director might have figured out that the dossier came to the FBI not through actual intelligence channels but through an official’s wife who was on the payroll of the dossier-creating company, Fusion GPS.

But Justice Department and FBI officials – egged on by the infamous Lisa Page and Peter Strzok of the FBI – knew better than to follow the Constitution. They were now on a mission to remove Trump from office for daring to fire Comey; they even thought they were part of the 25th Amendment, which empowers only the Cabinet and Congress to remove the president from office in extraordinary circumstances.

Realizing that approach wouldn’t work, the FBI and Justice Department officials acted to keep the investigation they created under their supervision and with their friends whom they would appoint. And so rather than allow the new incoming head of the FBI to make these decisions, they acted to empower their buddy Robert Mueller as a special counsel.

Mueller, in turn, hired only Democrats, including a lawyer for the Clintons, and the “insurance policy” was launched and ensconced in power. So a counterintelligence investigation that was formed without probable cause now became the largest criminal investigation in history of a campaign and a presidency, dragging on since May 2017.

Adding to the intrigue is that Comey, McCabe and Deputy Attorney General Rod Rosenstein all disagree with each other in material ways.

McCabe believes he never lied to investigators and had permission from Comey to leak to the press. Comey says McCabe acted on his own.

McCabe and others say Rosenstein was deadly serious when he discussed invoking the 25th Amendment and wiretapping against President Trump in an effort to remove the president from office. Rosenstein says he was just joking around.

Newly confirmed Attorney General William Barr needs to crack all this wide open. The secret charge to Mueller needs to be released. The FISA warrants need to be declassified.

A grand jury must be empaneled to investigate all this and get testimony from officials under oath, and the certification of the warrants used to wiretap the Trump campaign needs to be fully investigated. Dossier author and former British spy Christopher Steele and Glen Simpson – founder of opposition research firm Fusion GPS – need to be called to the grand jury.

If Mueller wants to continue instead, he should be required to balance his team with Democrats and Republicans, removing any former Clinton lawyers.

Rosenstein, who never should have been allowed to run this investigation because he was a fact witness who wrote a memo justifying firing Comey, will be leaving shortly.

McCabe and Comey appear on TV, write books, and have become nakedly partisan, revealing political attitudes no different from Strzok and Page. They readily believed unsubstantiated information and then took power into their own hands.

Every Democrat, Republican and independent should stop angling for partisan advantage and agree, regardless of who is helped or hurt, that these officials acted without proper authority and are responsible for unprecedented damage to our democracy and our political system.