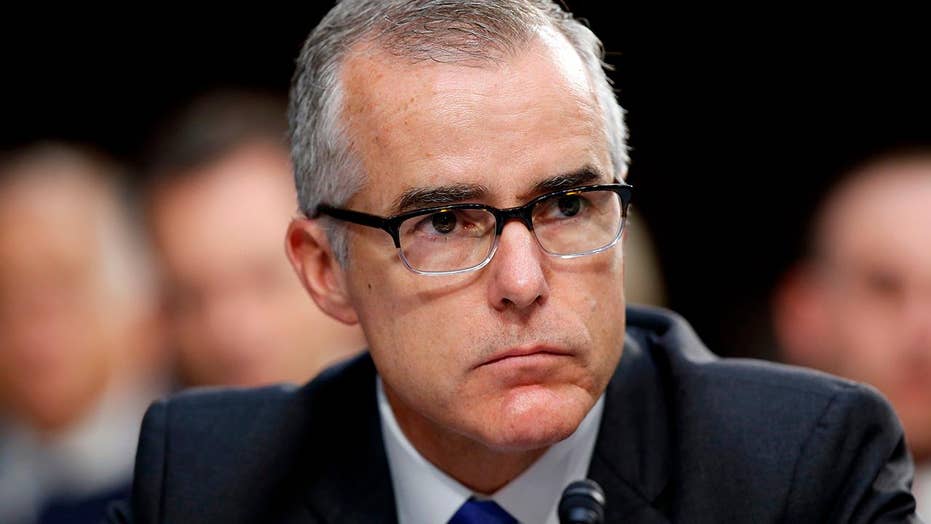 Andrew McCabe confirms he opened the investigation into President Trump

Andrew McCabe is a national disgrace. He was part of the most corrupt and most partisan leadership team in FBI history and was fired for being dishonest under oath.

And yet, America owes him a big thank-you.

McCabe, you see, has reminded us once again that there really is a powerful deep state, and that there has not been a full accounting of rampant FBI misconduct during the presidential campaign of 2016.

MICHAEL GOODWIN: CAN THE DEMOCRATS EVER GET OVER THEIR ANTI-ISRAEL BIAS?

There is also still too much we don’t know about the role top aides to then-President Barack Obama and higher-ups in the Justice Department played in spying on the Trump campaign and leaks of classified information for partisan purposes.

In short, what is arguably the greatest scandal in the history of America remains mostly hidden from the public. That shroud of secrecy piles one scandal on top of another.

Fortunately, the McCabe reminder is a timely one, coming on the same day that William Barr was confirmed as the new attorney general. Barr is just the man to get to the bottom of the unprecedented plot to swing an election and later to remove a duly-elected president.

Barr, who was AG under the first President Bush, also will oversee special counsel Robert Mueller’s seemingly endless probe and, hopefully, bring it to a conclusion.

When is enough enough? When will the Trump haters take no for an answer?

McCabe is talking because he’s peddling a book and, just as Comey the Snake before him, is aiming his sales pitch at anti-Trumpers. He used an interview with CBS to offer more details of a discussion within the FBI and Justice Department to use the 25th Amendment to remove Trump from office.

McCabe said that the effort took shape immediately after Trump fired Comey in May 2017 and that numerous people were involved, including Deputy Attorney General Rod Rosenstein.

McCabe’s version of events dovetails with a New York Times report last September that Rosenstein met with McCabe and others and offered to wear a wire in meetings with Trump to get incriminating information, a hint that McCabe was the prime source for that story.

Rosenstein, through an aide, denied the account Thursday, just as he did last September.

But his repeated insistence that McCabe’s tale is “inaccurate and factually incorrect” remains unpersuasive and is undercut by the fact that, a week after the meeting in question, Rosenstein appointed Mueller. Because parts of the memo authorizing that appointment remain classified, America doesn’t know the full reason why Rosenstein thought a special counsel was warranted.

Yet the Mueller probe, with its ancillary indictments of Trump associates and others, has created an unfair cloud of uncertainty over the administration and fueled Democrats’ impeachment fantasies. Even now, they are using Russia, Russia, Russia as an excuse to put Trump’s family and his entire life and business under scrutiny.

When is enough enough? When will the Trump haters take no for an answer?

Meanwhile, we do know that Comey and his dirty crew used the unverified Christopher Steele dossier, which was funded by Hillary Clinton’s campaign, to get a secret court warrant to spy on the Trump campaign. And FBI text messages, along with congressional testimony, confirm that the same agents probing Trump were simultaneously involved in the Clinton e-mail investigation and decided to go easy on her because they thought she would be their next boss.

Recall that Peter Strzok, the top agent in both cases, called the Trump probe an “insurance policy” in the event he won.

Barr testified that he was “shocked” when he saw such blatant evidence of bias against Trump, and promised to investigate the investigators.

He can begin by getting to the bottom of the conflicting roles Rosenstein played. In charge after his former boss, Jeff Sessions, recused himself, Rosenstein advocated that Trump fire Comey, then used the firing as a pretext for appointing Mueller. He also signed the final secret court application, thus giving a misleading endorsement of the Steele dossier.

Yet Rosenstein, a career prosecutor who is expected to resign now that Barr takes over, nonetheless developed a good relationship with the president, and it somehow endured the Times report last September of the 25th Amendment plot. And he was able to convince the president to withhold documents detailing why the FBI and Justice Department first focused on whether the Trump campaign had any improper relationship with Russia.

Barr, of course, will have a full plate of current issues and new initiatives of his own he wants to pursue. But if there is any hope that the FBI and Justice will regain the credibility they squandered, the new AG must rip off the shroud of secrecy hiding a dark episode in American history.

Anything less will only compound the crippling distrust many Americans already have for their government.