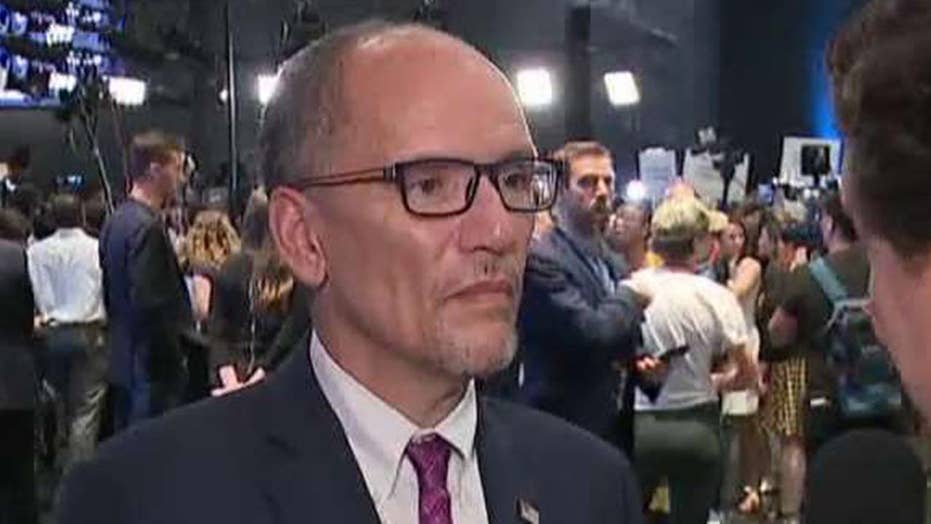 Tom Perez discusses the candidates' performance on the second night of the first 2020 Democratic primary debate.

With more at stake for the front runners, the second Democratic debate Thursday night in Miami had far more fireworks than the rather tepid debate the night before.

By and large, the moderators went down a list of Democratic issues as defined by the left of the party, and the candidates largely pandered in their answers.

Interestingly when asked what issue they would bring before Congress this group of mostly seasoned politicians ducked the issue for fear of alienating one constituency over another.

Based on two nights of debates, impeachment is a dead issue of little interest to the presidential candidates but free health care for undocumented immigrants is now a consensus issue among the candidates.

Joe Biden — He successfully showed he could stand up under withering challenges and recite a list of his accomplishments. He was generally articulate, on point and unflappable. But his response to the attack by Kamala Harris has holes, saying his vote against federally ordered busing was not a vote against busing.

Kamala Harris — She went in with a mission of having a confrontation with Biden, who is holding 50 percent of the African-American community votes. She went after him on the issue of race, and her attack will be the most replayed moment of the debate, elevating her status and perhaps reclaiming some of an important constituency from Biden. She had the most aggressive style of all the debaters and that may help her if the voters are looking for someone they believe won’t wither under attacks by President Trump.

Pete Buttigieg — His answers were generally articulate and he was careful to take some moderate positions like questioning "Medicare-for-all." His answer on the police shooting in his city was obviously rehearsed and very tentative, but he got through it. Nevertheless, he remains a candidate with a growing hold on younger voters who can’t be counted out. He has ended Beto O’Rouke’s campaign by edging him out as the less-than-experienced insurgent candidate.

Bernie Sanders — He generally repeated his attack on corporate America over and over again and it sounded a bit hollow. His performance on Thursday night is unlikely to stop the advance of Elizabeth Warren who is splitting the party’s most progressive voters.

Kristen Gillibrand — She swung for the fences with an impassioned defense of women’s reproductive rights, but her attempt to go after women’s votes seemed inauthentic and forced. She likely did not advance her candidacy much in this debate.

The rest of the candidates generally were losers even as they gave some articulate and interesting answers. But they will likely remain far behind the front runners.

So, Biden holds on to his lead. Harris is moving up. Sanders is going down. Elizabeth Warren and Buttigieg are the ones to watch.