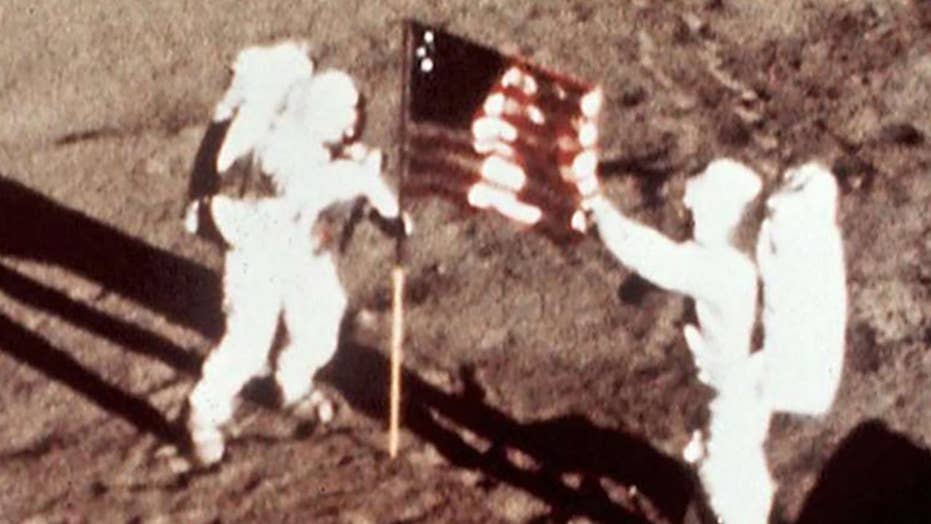 Gosling – who came out in 2015 as a fan of Bernie Sanders while later spoofing Donald Trump – was recently quoted in the Telegraph newspaper in London explaining why the American flag was deliberately left out of a movie chronicling the greatest scientific achievement in American history.

When asked by the paper if the film was an “un-American take on the moon landing,” the liberal actor replied that Armstrong’s accomplishment “transcended countries and borders.”

Gosling further explained: “I think this was widely regarded in the end as a human achievement and that’s how we chose to view it. I also think Neil was extremely humble, as were many of these astronauts, and time and time again he deferred the focus from himself to the 400,000 people who made the mission possible…So I don’t think that Neil viewed himself as an American hero…”

That is Gosling’s viewpoint. One could also wonder if he, the Canadian director and others in Hollywood wanted the film to incorporate revisionist history to push an ideological viewpoint of today.

In 1988, while working at the Reagan White House, I was afforded the rare opportunity to sit down one-on-one with Armstrong in the White House and it was, and is, one of the highest honors of my life. I was conducting interviews at the time for my first book, “Footprints – The 12 Men who walked on the Moon Reflect on their Flights, their Lives, and the Future.”

Armstrong and I spoke for about an hour and he could not have been nicer or kinder. He sensed I was nervous and put me at ease immediately by turning the tables and asking me questions about my background and my life. Even though I had heard he did not like to give autographs, when I mentioned my then-9-year-old niece Chrissy and 10-year-old nephew Christopher, he signed something to both on White House stationary.

Gosling is correct about one thing for sure. Armstrong was beyond humble. Weeks after our interview, he called me to ask that I not use it. He told me how very sorry he was to ask, but that upon further reflection, he was not comfortable talking about himself and did not want anyone to get the impression that the mission was about him.

I agreed immediately with his request.

While greatly disappointed – we ended up scrambling and using existing public quotes for the book – I was deeply impressed at how truly humble Armstrong was and how important it was to him that others receive the credit he believed they deserved.

On that subject, Gosling was only half correct when he speculated that: “…I don’t think that Neil viewed himself as an American hero.”

While Armstrong never viewed himself as a “hero,” he was incredibly proud to be an American. An American, who before becoming a test pilot and the first human on the moon, was a highly decorated naval aviator who flew 78 combat missions during the Korean War.

With regard to the slight against the United States and of the American flag being left out of “First Man,” Gosling jokes: “I’m Canadian, so might have cognitive bias.”

As someone who has more relatives in Canada than the U.S. – my family making its way from Nova Scotia to Boston decades ago – I would say his bias has nothing to do with Canada and everything to do with being liberal.

When I spoke with Armstrong back in 1988, he – along with all 11 other men who walked on the moon that I spoke with – very clearly saw the moon landing as an American achievement and was in fact, quite proud to plant the American flag in recognition of the American blood, sweat, and tears which helped get him and Buzz Aldrin to the surface.

Revisionist history in the support of partisan ideology is always dangerous…on any side. Over the last five decades, liberals have obtained more and more control over Hollywood. Precisely because of that power, the temptation to use film to change history can be overpowering.

That temptation acknowledged, the facts are that Armstrong felt very strongly about maintaining American preeminence in space. In 2010, Armstrong testified before the Senate saying that then-President Obama’s disappearing space program: “…presents no challenges, has no focus, and in fact, is a blueprint for a mission to nowhere.”

While Ryan Gosling has the right to put his spin on any subject of his choosing, he is wrong in this case.

Armstrong was a proud American who served his nation with great distinction who saw the moon landing as an American achievement worthy of an American flag being left on the surface forever in recognition of the tremendous sacrifice it took to get our nation there.

An American flag now censored from his hands in the movie “First Man.”