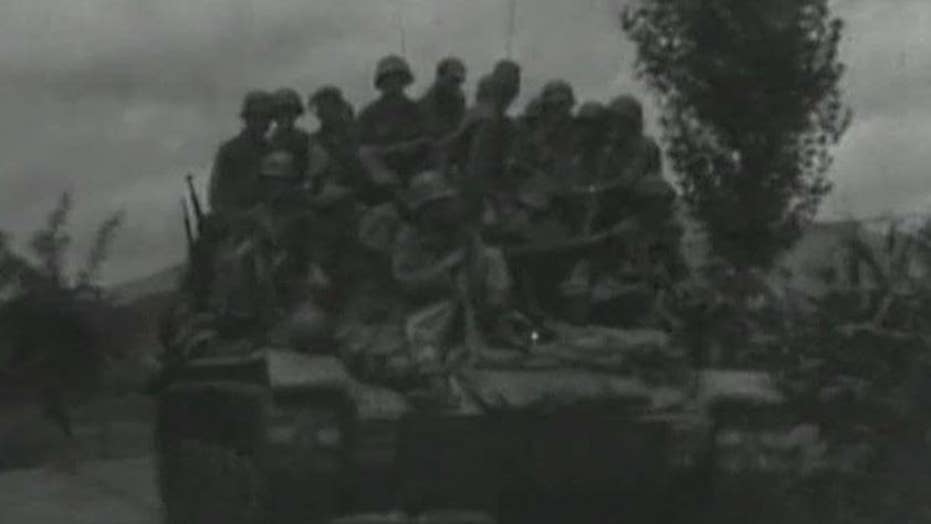 US expecting North Korea to return remains of US soldiers

U.S. officials are expecting North Korea to return the remains of 55 American soldiers from the Korean War. Greg Palkot reports.

President Trump seems to have persuaded North Korea to turn over the remains of 55 American military service members who were killed during the Korean War. According to South Korean media, the action is expected on Friday – the 65th anniversary of the armistice that halted fighting in the Korean War.

All Americans should welcome this step as a sign of improving relations between the U.S. and the North. Assuming the remains are handed over, President Trump should respond to the goodwill gesture with a bold move – offering to sign a peace treaty with the North that finally and officially ends the Korean War.

Since we have already bent far from our original stance of not even holding a summit with North Korean dictator Kim Jong Un until he agreed to concrete terms of denuclearization, going a little farther down the road won’t matter.

What the Trump administration should do now is back a plan for the leaders of the U.S., China, North and South Korea – as well as the secretary general of the United Nations – to gather along the demilitarized zone (DMZ) dividing North and South Korea. All should sign a basic peace treaty ending the Korean War that began before they were born or when they were young children.

We should not look at this as any type of concession. The Korean War ended 65 years ago and should have been declared over decades ago.

With a peace treaty signed, America and its allies should immediately seek cuts in conventional forces along the DMZ as another way to build confidence that all sides can trust one another.

But then would come the hard part, and Kim would need to make some progress on giving up his nuclear arsenal. This is where almost every negotiation with Pyongyang falls apart – and maybe it will again.

It’s true that the most difficult promises made at the Singapore summit in June between President Trump and Kim have been left mostly unfulfilled. Little verifiable progress seems to have been made in getting North Korea to give up its nuclear weapons – despite Kim’s vague pledge at the summit to work toward denuclearization.

But think back to how much worse relations between our countries was last summer. On the Fourth of July in 2017, the North tested its first intercontinental ballistic missile (ICBM) and tensions were running high.

President Trump declared a month later that North Korea would be met with “fire and fury” and Kim threatened to send missiles near Guam in a show of force.

What a difference a year makes.

Today the Kim regime has declared a moratorium on ICBM testing, closed down its nuclear proving grounds and not tested an atomic device since September. It has also dismantled an important part of North Korea’s Sohae Satellite Launching center.

Considering how far we have come in such a short time – when there were reports in January that the U.S. was considering a “bloody nose” military strike against North Korea – the situation today is much improved.

We should keep a skeptical mind. Trusting North Korea to denuclearize without verifiable proof of concrete action the nation is taking would be naïve. The nation still retains the ability to build a new nuclear weapon every seven or eight weeks. It has massive stockpiles of missiles, along with chemical and biological warfare weapons that are  growing ever more deadly and sophisticated.

We should also remember that all the steps the regime has taken so far, while clearly signs of confidence building measures, are completely reversible. Just because Kim does not detonate a nuclear bomb or fire a missile over Japan does not mean he can’t build ever more advanced nuclear weapons. His program can advance through testing in laboratories and with computer modeling.

So, what happens now? The Trump administration must truly seize the initiative and continue to push forward, constantly testing North Korea’s intentions to ensure it is serious about giving up its nuclear weapons.

With reports breaking that Kim might have other ideas, we must get a sense of how long a denuclearization process might take, or if Pyongyang is simply stringing us along – just like every other time previous U.S. administrations attempted to negotiate with the North on its nuclear program.

President Trump has sent Secretary of State Mike Pompeo to Pyongyang on three separate occasions. We have suspended, cut back or delayed important military exercises with our allies on the Korean Peninsula several times. And President Trump has held a legitimizing summit with Kim Jong Un.

Now it’s time to give a peace treaty a chance. The effort to officially end the Korean War may go nowhere – or it could be an important step on the road to denuclearization. We won’t know if the move will work unless we try.

The Trump administration should use the occasion of receiving the remains of some of the nearly 4,000 missing soldiers from the Korean War to seek a final end to the conflict and find out if Kim can truly be a partner we can trust. I am skeptical, but we must get some answers.