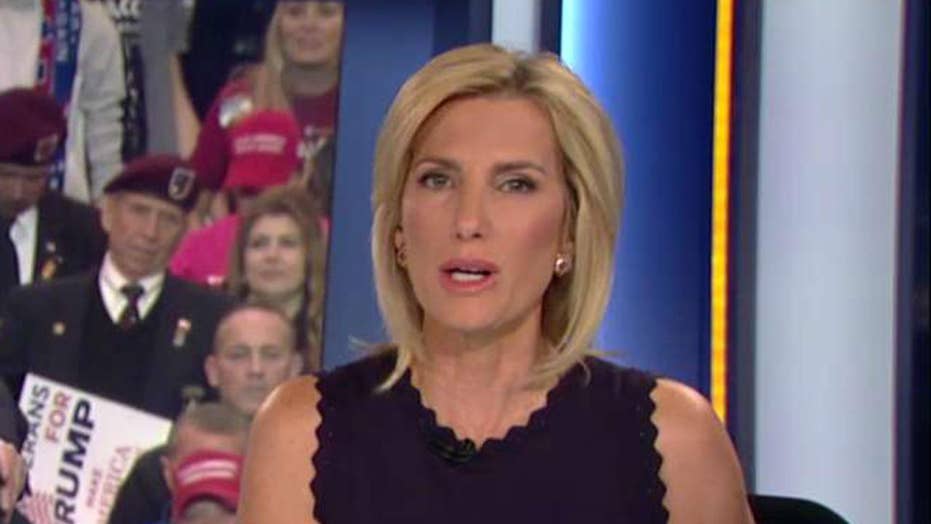 Ingraham: Trump's victory and the Democrats' race to defeat

All things considered, it was a very good night for Republicans and a major win for Donald Trump.

All things considered, it was a very, very good night for Republicans and a major win for Donald Trump. Now, the president was absolutely tireless on the campaign trail. He stumped for Republican Senate candidates across the country. Trump ignored the advice of people like Paul Ryan, God bless him, and the liberal media consultants.

And that he followed his own political instincts. And I will say that those instincts are generally superior to all the so-called pros, many who a few  months ago by the way were predicting a big blue wave, which in the Senate was more like a wave goodbye for Democrats. And in the end, the president accurately laid out what this midterm would hinge on.

Here’s how he put it: "This will be the election of the caravan, Kavanaugh, law and order, tax cuts, and common sense. That's what it is, common sense."

He couldn't have been more correct. In the end, the Republicans saw historic gains in the Senate, something that has only happened three times since 1906. And certainly, Kavanaugh, and he ticked that off, was a huge factor. Almost all the Democratic senators in tight races who voted against Kavanaugh lost.

And those who suggested that the president should've muted his talk of immigration on the campaign trail -- hello, Paul Ryan -- were simply wrong. Most pro-amnesty Republicans -- well, they either retired or lost.

Why didn't they want the embrace? “Mia Love didn't give me love “- - I'm sorry but I'm screaming. It was so funny. All right, so most of those who bucked the president on immigration, they crashed and burned. Still others like Paul Ryan, Jeff Flake, Bob Corker, and as we said, they retired.

And of course there were some exceptions. We got to be fair. Kris Kobach was basically attached to the hip with Trump on immigration, but he lost in Kansas's gubernatorial contest. Sadly, he just wasn't a great campaigner.

But on the whole, Trump's strong immigration policies prove a deciding factor in both the Senate and gubernatorial victories in Florida, Texas, and in Georgia. Now, in Florida, for example, voters rated immigration the second most important issue. Just a few points behind health care. Check it out, three points:

Now, these midterms also show that neither political nor Hollywood star power paid off in Georgia or in Florida. And what the Democrats did achieve in these midterms was a, well, below average pickup of seats in the House against the party of power. The amazing thing is with all this happening, the Democrats still really haven't learned anything.

Since Donald Trump descended that big brass escalator in the Tower, they've been trying to cast him as a racist, a xenophobe, biased, you know, he's kind of like an Archie Bunker in a long red tie. -- You cannot put up with someone like Archie Bunker today.

My friends, the Democrats are bereft of real ideas. So rather than offering some, they propose socialist style freebies, in health care, college, universal pre-k. And the Democrats once again, by the way, went all in for identity politics in the midterms. They tried to argue that Brian Kemp in Georgia was trying to stop black people from voting. It's ridiculous.

They tried to argue that Ron DeSantis in Florida was some kind of closet racist for questioning Gillum's ethics. And it went on and on and on. And even after they got shellacked in 2016 and lost the Senate on Tuesday night, they are still dealing the race card.

Here’s are some of the things we heard in the aftermath of the midterms:

UNIDENTIFIED MALE:  He used every race, dog whistle, every bigotry that he had.

UNIDENTIFIED MALE:  I want us to watch [President Trump] because he's going to replace the caravan with a New York, west coast intellectual Jew Adam Schiff, a black man, Elijah Cummings, and a woman: Nancy Pelosi.

CHUCK TODD, MSNBC HOST:  The president has enough support and enough places to win big races in states that have large enough rural populations to either offset suburban America or whatever.

It's those racist rural people. So, how dare those country bumpkins ruin the country for the urbanite elites? Now, when the country rejects the left's racialization of politics, well, basically the Democrats just write them off altogether.I have a simple question to ask: How do you build a political movement by hating on basically half of the American people?

Rather than grapple with why this tactic fell flat on Tuesday night, the media continued the race to the bottom during Wednesday's White House news conference:

UNIDENTIFIED FEMALE:  On the campaign trail you called yourself a nationalist. Some people saw that as emboldening white nationalist. Now

people are also saying that the president --

TRUMP:  I don't know why you'd say that. It's such a racist question...

UNIDENTIFIED FEMALE:  There are some people that say that now the Republican Party is seen as supporting white nationalists because of your

rhetoric. What do you make of it?

highest poll numbers with African-Americans? I mean, why do I have my highest pollings? That such a racist question.

UNIDENTIFIED MALE:  Have you ever made racist remarks?

TRUMP:  I don't know. No, no, I would never do that and I don't use racist remarks.

UNIDENTIFIED MALE:  No, no, one point of fact, because you told her you have the highest poll among African- Americans. It's just eight percent, sir. Single digits.

TRUMP:  So when you talk about division, it's people like this that cause division. Great division -- point of fact is that I never used a racist remark. That's the point of fact.

The press was just absolutely reprehensible on Wednesday. I have never seen anything like that. And the president is right. Rasmussen's tracking poll from October 29th has the president at a 40 percent approval among black respondents. So he can throw out those single digits all they want,

Now, it's good that the president smashed back against these obvious attempts to recast his victory and demonize his supporters.

Here are the facts: the Democrats have lost two Supreme Court seats, the Senate, and the White House. And after two years of protest and nonstop attacks on Trump, they emerge from the midterms with no mandate. Good going, guys!

There is no doubt the president of course now will have his work cut out for him. He is going to have to recalibrate his approach as the New Year begins under Democratic House rule. So he would be wise to do a few things.

He should begin to expand his movements beyond where it already is and he's got to adapt to the changing demographics in key states.

Occasionally, he should shift to a more moderate tone while not moderating his policies.

He should offer to work with Democrats on issues of common concern, which by the way, he did on Wednesday!

Here’s what he said at the White House at Wednesday's press conference:

“I put that statement out on social media today about Nancy Pelosi and a lot of people thought I was being sarcastic or I was kidding. I wasn't. I think she deserves it. She's fought long and hard. She's a very capable person. Nancy Pelosi and I can work together and get a lot of things done. “

That was a great moment, but he's getting no credit for that.

Now, sometimes the president might seem to think that showing his humanity or soft -- I do not want to say soft, maybe his humanity is a sign of weakness. It's not.

The next Supreme Court nominee should be chosen without regard to gender, skin color, none of the bean counting. It should only be based on his or her conservative bona fides. Forget the bean counting, you don't need to do it.

Now, don't fret the House investigations, Mr. President. We all know that Nadler, Maxine, Schiff, et cetera, will all take you the step too far in their fervor for payback, and the voters won't like that at all.

President Trump will have to be more creative in advancing his agenda forward. But in the meantime, he should feel really good about what he accomplished, especially since the voters may have unwittingly given the president something he has needed for so long: A clear and worthy opponent.

Adapted from Laura Ingraham's monologue on "The Ingraham Angle" on November 7, 2018.