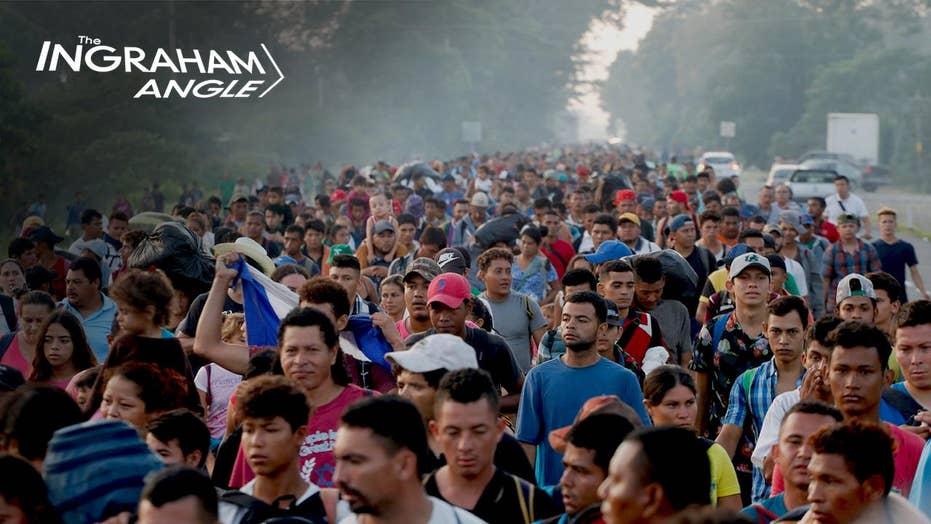 On Monday, Laura Ingraham redefines the caravan of a reported 14,000 migrants as a ‘mobile mob.’ Then later, Laura inspects a sexual assault allegation made against Senator Corey Booker. Plus: Raymond Arroyo interviews attendees at President Trump’s Texas rally in support of Senator Ted Cruz.

Just as in 2016, there is no politician in America today who has a better read on what the voters want than Donald Trump.

Last night in Houston at a rally for Ted Cruz, President Trump drew a reported18,000 people with thousands more stuck outside. But the excitement isn't confined to Houston. New data from NBC News indicates that the Democrats' hope of a 'blue wave' may be receding. Republican voters are outpacing Democrats in early voting in seven key states: Arizona, Florida, Georgia, Indiana, Montana, Tennessee, and Texas. Democrats are leading only in Nevada. And the president's approval rating is as high as it's ever been.

The hosts of MSNBC's early show, which ought to be renamed "In Mourning Joe," are apoplectic.

Lions and tigers and bears, oh my! Mika hasn't been this upset since, I don't know, election night?

It turns out that people across the country vote their pocketbooks and choose results over resistance. Republicans are trouncing Democrats by 15 points in the category of who best handles the economy.

Another big issue where the far-left liberals just don't seem to understand normal Americans is illegal immigration, and specifically the so-called "caravan." Yes, that's what everyone calls the horde of migrants storming through Mexico and making their way to our border. Merriam-Webster's definition of caravan is: "a company of travelers on a journey yesterday through a desert or hostile region. Also, a train of pack animals. Secondary, a group of vehicles traveling together as in a file. A covered wagon or motor vehicle equipped as traveling living quarters."

The word "caravan" colloquially connotes something fun, festive, desirable. Well, yet other descriptions come to mind among Americans and legal immigrants watching this all play out.

They wonder why their country would welcome with open arms people who barged across the border even as disabled veterans sleep on the street. They wonder if liberal politicians simply see the migrant mob as future Democratic votes. And they wonder why illegal immigrants should be able to find work when many Americans still cannot.

True refugees fleeing oppression will encamp wherever they can away from their place of origin, which they have fled to escape danger. In this case, we would see folks from Central America staying in Mexico. Legitimate seekers of asylum must live in credible fear of government repression based on religious, racial or ethnic identity. Home country violence and government corruption, as terrible as they are, and whether it's in Central America or anywhere else, are not sufficient bases for asylum, nor is the desire just to get a better job or live a better life.

If simply wanting a better life warranted asylum in the U.S., our population would be roughly 6 billion by now.

So who are these migrants who, according a Mexican newspaper have swelled to 14,000 from the initial 1600 just last week? They're mostly working-age males. A far smaller number of women and children are usually seen out in front. Many have friends or family already in the United States, many of whom are here illegally. Of course, they're impoverished with little to no English speaking skills at all. They're from Honduras, Guatemala, and many from Mexico. Others we don't know where they're from and it's undetermined how many have documents at all. How many have health problems or even criminal records? The president yesterday told reporters to do some digging instead of just the glossy, easy sob-story reporting.

It doesn't matter where people come from, whether it be Central America, Europe or any other part of the world. If they come illegally, most Americans think it's not fair and President Trump agrees. Not only would allowing this crush of people into our country be an insult to the millions of Americans who went through the legal process, it would be unfair to Americans who need help and are not getting it, like the 40,000 homeless veterans on the street on any given night.

When it comes down to deciding between those folks or an angry mob of foreign migrants, President Trump knows the answer: America first.