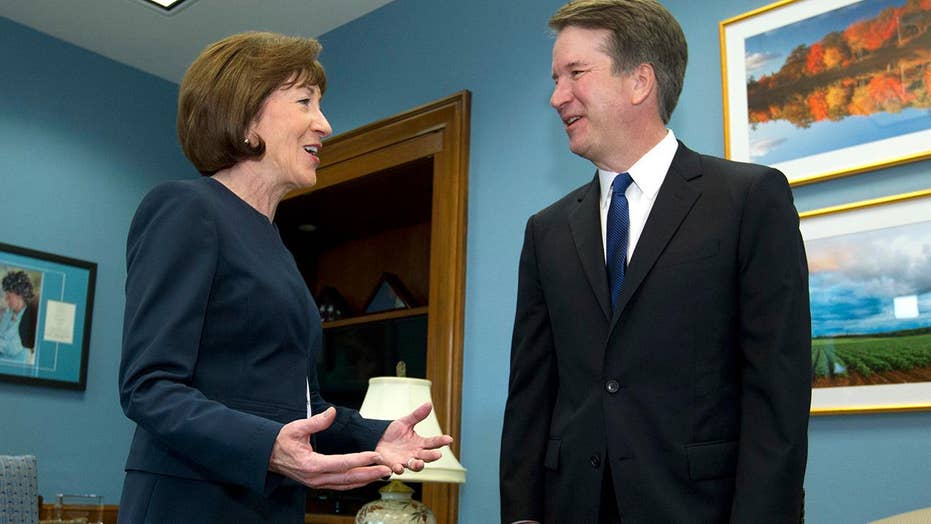 $1 million raised to push Collins to vote against Kavanaugh

Crowdfunding campaign calls on the Republican senator to be a 'hero' and vote 'no' on the Supreme Court nominee or be replaced in 2020.

Just when you think those on the left can’t possibly sink any lower into the gutter with attacks filled with vitriol and desperation, they surprise you again. This time the target of liberal anger is moderate Republican Sen. Susan Collins of Maine – who is being threatened if she dares vote to confirm Judge Brett Kavanaugh’s nomination to the Supreme Court.

In the latest example of bullying by the left, a crowdfunding site has been set up to raise money to defeat Collins, should she run for re-election in 2020, if she casts her vote in coming weeks to seat the extraordinarily qualified Kavanaugh on the nation’s highest court. Kavanaugh has served for the past 12 years on the U.S. Circuit Court of Appeals for the District of Columbia.

The liberal organizations Mainers for Accountable Leadership and the Maine People’s Alliance are using the crowdfunding site in an effort to strong-arm Collins into voting “no” on Judge Kavanaugh.

Under terms of the fundraising deal, donors pledge money with a credit card. If Collins votes “yes” on Kavanaugh’s nomination, the cards will be charged and all donations will go to Collins’ opponent in 2020 – whoever that may be.

However, if Collins votes “no” on Kavanaugh’s confirmation the cards won’t be charged and no donations will be given to her opponent. No harm, no foul.

Collins said of these scheme: “It’s offensive. It’s of questionable legality. And it is extraordinary to me that people would want to participate in trying to essentially buy a Senator’s vote.”

What will the unknown candidate’s positions be on issues of concern to Maine voters? What qualifications will he or she have? Will the mystery candidate have something in his or her past that will trouble voters? No one ones this – yet thousands of people are willing to give this person more than $1 million.

This is where Trump Derangement Syndrome has led us.

If you think this whole “fundraising” campaign sounds shady, you’re not alone.

While Collins stressed that this won’t influence her vote, she wasted no time calling out this  effort, saying: “I consider this quid pro quo fundraising to be the equivalent of an attempt to bribe me to vote against Judge Kavanaugh.”

The law could be on her side, though she hasn’t decided if she is going to pursue any legal action.

“I have had three attorneys tell me that they think it is a clear violation of the federal law on bribery,” Collins  said. “Actually, two told me that; one told me it’s extortion.”

The left-wing rage is also being unleashed on the senator’s personal office. She’s received vulgar harassment calls, as well as a rape threat against one of her staffers, which has been reported to law enforcement.

Collins has worked alongside both Democrats and Republicans and she can hardly be considered partisan, yet her colleagues on the left are sitting in stone-cold silence. Not a single Democrat has come out and condemned these tactics.

Sen. Orrin Hatch, R-Utah, blasted his Democratic colleagues for not calling out such abhorrent behavior against Collins and her staff, tweeting: “Every Democrat should be condemning these antics in Maine – attempting to bribe Senator Collins to vote against Judge Kavanaugh and threatening sexual violence against staffers if she votes for him is absolutely disgusting.”

One would think blatantly attempting to swing a senator’s vote and threatening sexual violence against another person would be something all decent human beings could be united against. Apparently not.

The senator should do her best to tune out the blatant bullying from the activist liberals and the silent bullying from Democrats condoning this shameful behavior by refusing to condemn it.

Collins has yet to say how she will vote, but she had pretty strong words for those trying to see if they could own her vote. Collins voted for Justices Elena Kagan and Sonia Sotomayor – nominated by President Obama – because she believed they were well qualified. She should do the same for Kavanaugh for the same reason.