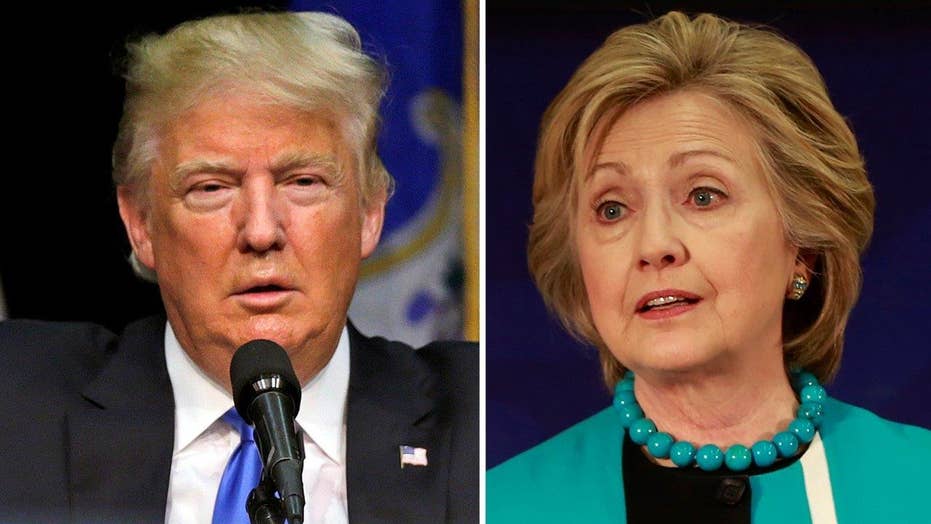 Trump vs Clinton electoral map: Which states are crucial?

What a week! It began with Donald Trump winning the GOP race with a bang, thumping Ted Cruz in Indiana, a state many thought Cruz would carry. But Trump couldn’t let the contest conclude without implying that Cruz’s father was involved in JFK’s assassination. Also, Bernie Sanders upset Hillary Clinton by five points in the Hoosier State, which the RealClearPolitics average suggested she’d carry by seven.

The week ended with a weak jobs report – 160,000 jobs in April, well below last year’s monthly average of 229,000. We don’t know whether this and a lower labor force participation rate are just blips or evidence of a slowdown. Still, neither is helpful to Democrats when 40 percent of Americans already believe the country is in recession.

Is Team Clinton preparing for a loss in the FBI primary? The defense it mounted after CNN reported Thursday that the FBI has interviewed top Clinton aides, some more than once, suggests so.

First, neither the FBI nor career Justice Department officials supervising the investigation are likely to be talking. So the sourcing – “U.S. officials briefed on the investigation” ­– points to political appointees willing to help their party’s frontrunner lay down a smokescreen.

There was the declaration that “investigators haven't found evidence to prove that Clinton willfully violated the law,” again attributed to “U.S. officials.” Claiming Clinton didn’t “intentionally” or “willfully” violate the law is meaningless. She need only have acted with gross negligence, disregarding known or easily anticipated risks.

The statement that the probe hasn’t expanded beyond handling of classified materials is untrue. Since January, there have been reports the FBI is investigating possible official actions linked to contributions to the Clinton Foundation revealed by the emails.

Sounds to me like Team Clinton wanted to get in front of the coverage by suggesting harmless, unintentional mistakes may have been made, but nothing serious. But the CNN report that prosecutors from the U.S. Attorney for the Eastern District of Virginia’s office are involved suggests a tie to the Romanian hacker Guccifer, who was extradited to the Eastern District. It is also the venue where the government would stand a better chance of securing a conviction, as compared with other plausible venues – Southern District of New York (which covers Chappaqua, where the server was in the Clinton’s basement) or the District of Columbia (where Clinton and her staff worked).

Bern is on a roll. Polls now point to him winning West Virginia on Tuesday, despite Hillary’s attempt last week to disavow her joyous declaration at an Ohio town hall that “We are going to put a lot of coal miners and coal companies out of business.” Sanders would, too, but he’s smart enough not to be open about it.

With a rally Sunday in New Jersey and others in Sacramento on Monday, Salem, Ore., on Tuesday and Missoula and Billings, Mont., on Wednesday, Sanders is not going away. He appears to be sharpening his convention demands, raising objections to how the Rules and Resolutions Committees are selected and toughening his language on Clinton’s Wall Street ties. This could indicate he’ll seek to end superdelegates and demand tough anti-Wall Street planks pleasing to the Democratic Party’s Elizabeth Warren wing.

Two quick pivots. Trump celebrated his ascension as the GOP’s presumptive nominee by reversing course. First, he flipped from opposing a national minimum wage increase in the November Fox Business debate to supporting one now.

Then, after celebrating for months that he was self-funding his campaign (tweeting as recently as March 15 that he was “the ONLY candidate who is self-funding his campaign. Kasich, Rubio and Cruz are all bought and paid for by lobbyists!”), Trump said on “Morning Joe” after Indiana, “Do I want to sell a couple of buildings and self-fund? I don’t know that I want to do that necessarily.” He then hired a finance director. It’s late to gin up a fundraising effort; he’ll probably still have to dump hundreds of millions of his money into the campaign, as well as explain the switch.

Party unity. Indiana guaranteed Trump the nomination, but not unity. As Republicans struggle to unify, maybe Trump should avoid saying of the GOP, as he did in an interview Sunday on ABC, “I think it would be better if it were unified, I think there would be something good about it, but I don’t actually think it has to be unified.” The more he says the party need not be unified, the less likely it will be.

A smarter approach would be to project confidence and humility by saying, “There are two months until the convention and six months until the election. I’m confident I can bring the party together,” then spell out his agenda. Trump’s agenda won him victory. That and opposition to Clinton are what can bring about unity, a necessary condition for victory in November.