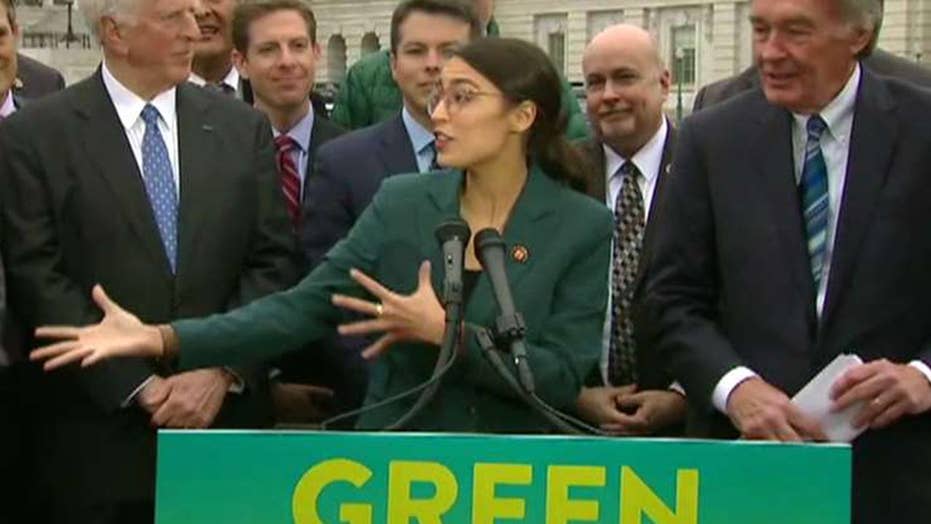 Can former Vice President Joe Biden thrive in a Democratic Party that treats predictions of climate change catastrophe as religious doctrine? Not if Rep. Alexandria Ocasio-Cortez, D-N.Y., and Sen. Bernie Sanders, I-Vt., have it their way.

Reuters reported Friday that Biden – currently the early front-runner for the 2020 Democratic presidential nomination in terms of voter support and fundraising – is crafting a “middle ground” climate change policy that his team believes will appeal to enough voters to put him in the White House.

According to the report by Reuters: “The backbone of the policy will likely include the United States re-joining the Paris Climate Agreement and preserving U.S. regulations on emissions and vehicle fuel efficiency that Trump has sought to undo, according to one of the sources, Heather Zichal, who is part of a team advising Biden on climate change. She previously advised President Barack Obama.”

Reuters also reported that “the policy could also be supportive of nuclear energy and fossil fuel options like natural gas and carbon capture technology, which limit emissions from coal plants and other industrial facilities.”

Biden’s “middle ground” policy comes just as Ocasio-Cortez – with help from Hollywood, the left-wing media and environmental groups – is ramping up her efforts to make the Green New Deal’s radical policies a litmus test for Democrats running for president in 2020.

The pressure imposed on Biden by the socialist wing of the Democratic Party to conform to its far-left agenda presents a significant problem for him.

So far, Ocasio-Cortez’s months-long effort to make the Green New Deal an essential part of the 2020 conversation has been wildly successful. Most Democratic presidential candidates have endorsed much or all of the Green New Deal.

Biden has refused to endorse the Green New Deal, choosing instead to provide vague commitments about battling climate change.

According to Biden’s website: “Climate change threatens communities across the country, from beachfront coastal towns to rural farms in the heartland. We must turbocharge our efforts to address climate change and ensure that every American has access to clean drinking water, clean air, and an environment free from pollutants.”

Although “turbocharging” government’s control over American energy and imposing the Paris Agreement’s costly renewable energy mandates for sources like wind and solar power might sound appealing to some on the left, to radicals like Ocasio-Cortez and Sanders, nothing short of embracing the far-reaching socialist Green New Deal will do.

“There is no ‘middle ground’ when it comes to climate policy,” Sanders said. “If we don’t commit to fully transforming our energy system away from fossil fuels, we will doom future generations. Fighting climate change must be our priority, whether fossil fuel billionaires like it or not.”

And Ocasio-Cortez tweeted: “There is no ‘middle ground’ w/climate denial & delay.”

Biden campaign spokesman T.J. Ducklo pushed back, tweeting: “As president, Biden would enact a bold policy to tackle climate change in a meaningful and lasting way, and will be discussing the specifics of that plan in the near future.”

“Any assertions otherwise are not accurate,” he added, noting in another tweet that “Reuters got it wrong.”

The criticism Biden has drawn from the socialist wing of the Democratic Party has been going on since he made it clear he was seeking the party’s presidential nomination.

Following Biden’s campaign launch in April, one of Ocasio-Cortez’s closest political allies – Justice Democrats Executive Director Alexandra Rojas – wrote in a statement: “While we’re going to support the Democratic nominee, we can’t let a so-called ‘centrist’ like Biden divide the Democratic Party and turn it into the party of ‘No, we can’t.’”

Among the policies Rojas criticized Biden for was not embracing is the Green New Deal.

The pressure imposed on Biden by the socialist wing of the Democratic Party to conform to its far-left agenda presents a significant problem for him.

Biden is absolutely not a “centrist” and his climate change policies would likely cause massive and destructive energy price increases and economic harm. But he’s not a socialist, and that’s a big reason why so many Democrats are currently backing him.

Although the Democratic Party has moved further to the left than ever, there remains a sizeable coalition of liberals who aren’t interested in completely destroying free enterprise, although that coalition appears to be getting smaller by the day.

The Green New Deal’s policies are nothing short of extremist. It would eliminate all fossil fuels in just 10 years, destroying millions of jobs, and it would put government in charge of America’s energy industry. It would also require the government “upgrade” every building in the country – including every home – to reduce energy consumption. And it would offer a guarantee for “green” housing.

All told, the Green New Deal could cost at least $93 trillion in its first ten years – about four times our current national debt.

If Ocasio-Cortez and Sanders were to force Biden to adopt the Green New Deal, no reasonable person could argue Biden is a “centrist,” or even merely a far-left liberal – making it much harder for Biden to win in a general election against President Trump.

This is especially true in America’s heartland, where Trump in 2016 performed better than most other recent Republican presidential candidates.

Contrary to what Ocasio-Cortez might think, most voters in Michigan, Ohio and Wisconsin don’t want the United States to become a government-controlled, socialist nation.

They don’t want America to make the same mistakes made by the ruling class in some parts of Europe, North Korea, and Venezuela.

Biden knows this. Ocasio-Cortez knows this. The only question that remains is, will Biden, in an effort to appeal to his party’s growing socialist base, choose to run off the Marxist cliff with the rest of the 2020 candidates?

Thus far, it appears Biden isn’t buying what the socialists in his party are selling, but peer pressure can be a powerful force in politics. Biden’s peers have proven completely unwilling to allow anyone to deviate from their far-left beliefs on climate change.