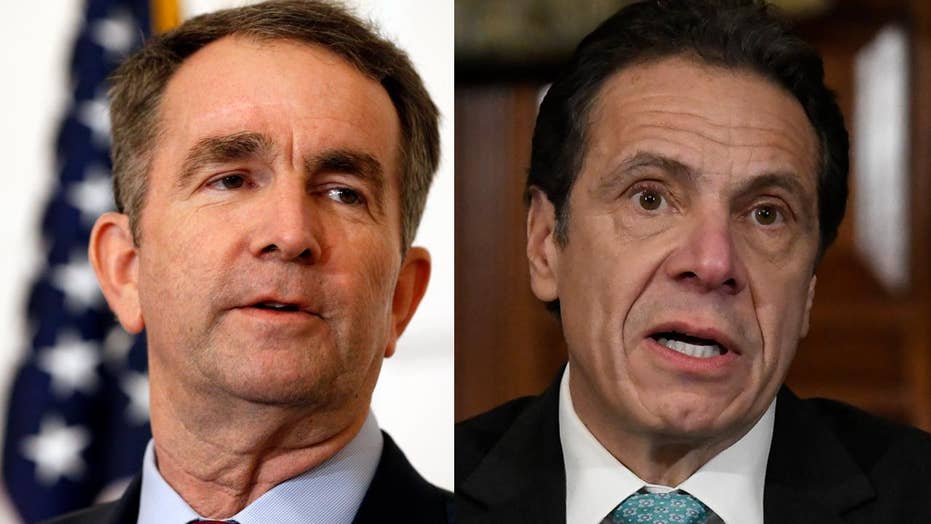 Judge Napolitano: Abortion and the right to stay alive

Much has been made lately of language in a recently enacted New York state statute that permits abortion up to the time of birth if necessary to preserve the life or health of the mother. New Jersey has had the same provision for two generations via a regulation of the Board of Medical Examiners.

Sadly, when New York Gov. Andrew Cuomo signed the new legislation into law two weeks ago, he did so in a joyful and celebratory atmosphere. What moral person could find joy in this?

The joyless debate over the issue of how late in a pregnancy is morally or legally too late for abortion was crystallized when the Virginia General Assembly was prepared to vote last week on legislation nearly identical to New York's, only to have that legislation inadvertently sabotaged by one of its most ardent supporters, Gov. Ralph Northam, a pediatric neurologist.

VERMONT 'RIGHT TO ABORTION' BILL GOES EVEN FURTHER THAN NEW YORK'S: 'FETUS SHALL NOT HAVE INDEPENDENT RIGHTS'

When Gov. Northam was asked on a Richmond radio show how the law would address a baby's surviving an abortion procedure in the ninth month of pregnancy and his cold and startling answer was that the proposed legislation would permit the mother and the physician to let the unwanted baby passively die, outrage ensued, and the legislation was defeated by one vote.

That outrage was soon diverted to Gov. Northam's fitness for office, not over his abortion comment but because his medical school yearbook page showed a photo with a person in blackface and another in Ku Klux Klan garb -- together depicting horrid, hateful, hurtful imagery reminiscent of an awful white supremacist-dominated time in American history that took bloodshed to erase. This shocking revelation and the defeat of the proposed Virginia legislation changed the public debate from letting babies who survive abortion procedures die to ridding the Virginia government of a potential, likely or former white supremacist.

Gov. Northam at first apologized, not for supporting legislation that would permit the passive deaths of unwanted babies but for his youthful blackface-posed photo. Then, on second thought, he denied that the photo was of him. Then political hell broke loose among Democrats who want him out of office.

But the issue remains and cannot be buried by the firestorm over the governor's 35-year-old yearbook page: What is the legal status of a baby who survives a late-term abortion procedure? Here is the back story.

In January 1973, the Supreme Court issued two abortion decisions on the same day. The better known of the two, Roe v. Wade, has been the fulcrum for political, legal, moral and religious debate as fierce as any this country has seen since the abolitionist movement challenged slavery in the era before the War Between the States.

Roe established that the fetus in the womb, notwithstanding human parentage and the possession of all the genomic material needed to develop into a full postnatal human, is legally not a person. This echoed another Supreme Court decision, Dred Scott v. Sandford, which was in the abolitionist era and effectively denied the personhood of African-Americans.

The personhood of a human fetus is not a mere academic question. If the fetus is a person, then it is protected from abortion by the Fifth and 14th amendments to the Constitution, which command the government to protect equally the lives of all people. But Roe did not stop with the personhood issue. It also decreed that the states may not regulate abortions in the first trimester of a woman's pregnancy, may regulate in the second trimester only for the health of the mother and may prohibit or permit abortions in the third trimester.

Yet here is the kicker, which has been below the Roe radar screen while 55 million babies have had their lives snuffed out in the past 46 years. Roe decreed that all states must permit abortions at any time in the pregnancy if necessary to save the life or preserve the health of the mother. Pregnancies that threaten the life of the mother are extremely rare, thanks to modern medicine. However, thanks to Roe's little-known companion case, Doe v. Bolton, the phrase "the health of the mother" can mean the physical, mental, psychological or emotional health of and (inexplicably) the age of the mother.

Stated differently, under Roe v. Wade and Doe v. Bolton, if a mother satisfies a physician that she would suffer emotionally if she were to carry her baby to term or is too old to be a mother, in all states in the union, she can have an abortion at any time in her pregnancy -- even at the end of the ninth month.

Now, back to the question put to Gov. Northam. Suppose the baby is not butchered in the womb but survives and is delivered alive. When the Philadelphia abortionist Dr. Kermit Gosnell was confronted with this, he used his scalpel to stab babies to death. At his murder trial, at which he was convicted, the prosecution presented evidence to show that if he had passively allowed the born-alive babies to choke or starve to death, he would not have committed a crime.

Physicians are taught from day one, "First, do no harm." What physician could let a baby die?

The dirty secret of abortion law is that mothers and abortion physicians may legally let unwanted babies born alive suffer and die with impunity. What about personhood? Isn't a living baby a person entitled to the equal protection of the laws? Under the natural law, yes. Under the Constitution, yes. Under Roe v. Wade and Doe v. Bolton, no.

No society that permits the active or passive killing of people because they are unwanted can long survive. No society that defines away personhood has any claim to knowing right from wrong. Whose personhood will the government define away next?