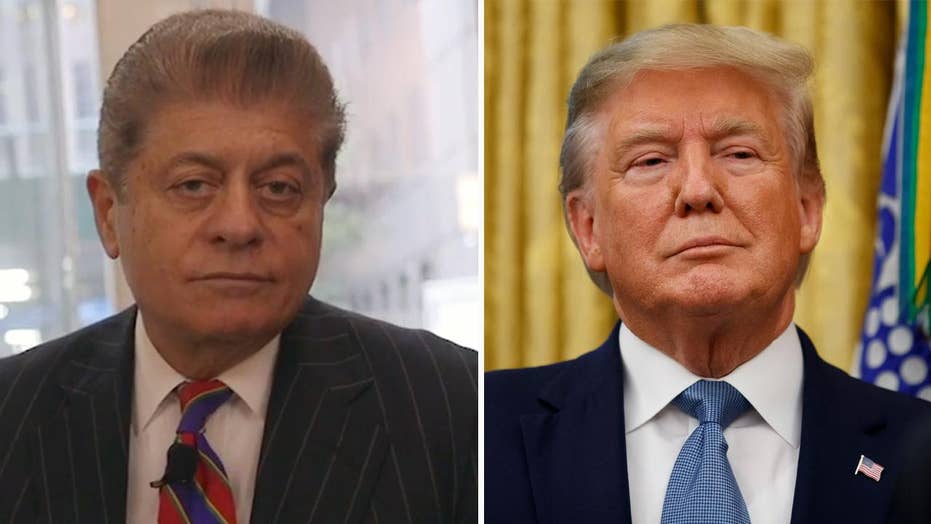 Judge Napolitano: With Syria, Trump lives up to his campaign promise

Judge Andrew Napolitano explains that President Trump removing U.S. troops from Syria is living up to his campaign promise and complies with his duty to uphold the Constitution.

Readers of this column are familiar with the concept of the separation of powers, which James Madison crafted as integral to the Constitution. That concept mandates that Congress writes the laws, the president enforces them, the courts decide what they mean and interpret them, and the three branches of government don't step on each other's toes.

The separation of powers also recognizes that the Constitution reposes unique authority in each branch and, at times, in each house of Congress. For example, only the Senate can confirm judges and ambassadors and ratify treaties. Only the House can impeach high-ranking executive branch officials and federal judges. Only Congress can declare war, and only the president can decide how to use the military to fight a declared war.

The war powers are clearly articulated in the plain language of the Constitution itself -- Congress declares and the president wages. Madison himself argued that if the president could both declare and wage wars, he'd not be a president but a prince. This distinction between declaring and waging was recognized for nearly 200 years, until Congress muddied the waters in 1973 by enacting the War Powers Resolution.

ROBERT MOORE: IRAN'S BELLIGERENT BEHAVIOR REMINDS US WHY CONGRESS, NOT THE PRESIDENT, HAS POWER TO DECLARE WAR

That law permits the president to wage any war against any foreign enemy without a congressional declaration of war for 90 days. This is clearly unconstitutional; the Supreme Court has ruled numerous times that the branches of the federal government cannot cede away powers that have been firmly fixed by the Constitution.

When the tragedy of 9/11 took place, President George W. Bush did not use the War Powers Resolution as his legal basis for invading Afghanistan. Rather he sought express authority for the invasion from Congress. Congress, rather than declaring war on Afghanistan (Bush had persuaded Congress that the 9/11 culprits found haven there), enacted a morally ambivalent law known as the Authorization for Use of Military Force of 2001.

That statute permitted Bush and his successors to fight against any foreign entity that planned or facilitated the 9/11 attacks and to continue fighting even after the targeted entity had been defeated. Bush sought and received another morally ambivalent AUMF in 2002, which authorized him to wage war in pursuit of any governments that harbored weapons of mass destruction, notably Iraq.

I have characterized both AUMFs as morally ambivalent because they are open-ended. When Congress declared war on the Axis powers in December 1941, those declarations authorized President Franklin Roosevelt to wage war on them only until they surrendered and not thereafter. But the two AUMFs have no stated endpoint.

They have an implied endpoint, however. The logical and moral endpoint of the AUMF of 2001 came when the folks who took over the government of Afghanistan and used its government power -- this is Bush's version -- to stage and support 9/11 were defeated and killed. The logical and moral endpoint of AUMF of 2002 came when Saddam Hussein was deposed, no weapons of mass destruction were found, and Washington installed a friendly (lately, not so friendly) regime in Iraq.

I offer this brief legal and historical background in order to address the current furor raging over President Trump's decision to withdraw American troops from Syria. From Syria? What are they doing in Syria?

The United States has had a financial and quasi-military relationship with the Kurdish people who live in northern Iraq -- an area they call Kurdistan -- since the end of World War I. The financial support has come via covert sources. Stated differently, from the CIA. The Kurds -- who are furious fighters -- in turn have supported Western interests in the region.

In 2017, Trump ordered American troops into Syria to support the Kurds, whose homeland had become threatened by the forces combatting each other in Syria, and who were in the crosshairs of the president of Turkey. Trump used the AUMF of 2001 as his legal authority for sending troops to Syria. That, of course, was enacted to crush those who perpetrated 9/11, not to assist friendly groups 16 years later anywhere in the world.

Nevertheless, Trump's 2017 decision was consistent with the long-standing, nearly 100-year support that American governments have given to the Kurds. And the Kurds have relied on the continuation of that support.

Last Sunday evening, Trump changed his mind about military support for the Kurds. He did so after a telephone conversation he had with the president of Turkey, who views the Kurds as terrorists. Trump was told that if American troops stayed in Syria, they risked injury by Turkish troops. If they left, the Kurds would be on their own.

His decision to withdraw the troops caused a firestorm among those in Congress who like war and those who believe that the U.S. should be using our military amply in the Middle East to help our friends and oppose our foes. Yet, those in Congress who have cried out the loudest about Trump's decision care not about the Constitution or even about the powers of Congress.

Trump ran for office promising to bring the troops home. He may have made the latest decision to do so without adequate warning to his military commanders, but his decision is utterly consistent with his promises, and it is utterly in compliance with the Constitution.

Now is the time for Congress -- which is largely angry at the presidential use or nonuse of the military -- to repeal both AUMFs and the War Powers Resolution and reclaim its constitutional power as the sole entity in the federal government able to declare war. Until it does, these profoundly outdated, morally ambivalent and overtly unconstitutional statutes lie in the presidential desk drawer like a loaded gun.