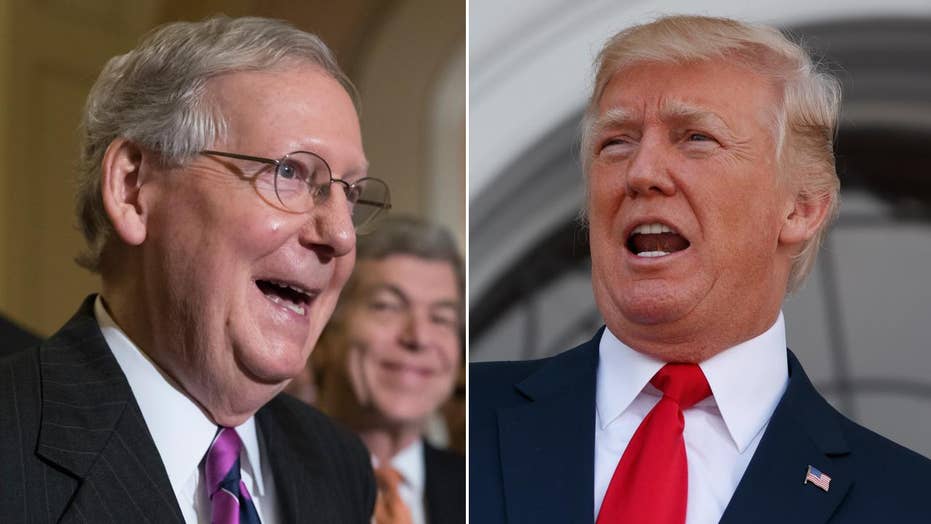 That ongoing fight has a few in the Republican majority on Capitol Hill privately raising the prospect of a formal censure of Trump over his response to the violence in Charlottesville, Va.

Censure of a Republican president by a Republican Congress remains highly unlikely. The prospect of impeachment or a concerted effort to pressure the president to resign over broader issues — including allegations of collusion with Russia during his campaign, or the suggestion he could have obstructed justice by his firing of FBI director James Comey — is even more remote.

Even so, fear of the populist president is giving way to anger among Senate Republicans. First of all, they can’t explain the politics of Trump going after the Republican leader of the Senate. Why is the president opening the question of whether McConnell should resign?

Why is the president delighting in taking down Republican senators? In recent days, he has labeled Sen. Jeff Flake (Ariz.) as “Flake Jeff Flake,” and derided Sen. Lindsey Graham (S.C.) as a “publicity seeking" liar.

The lack of answers is why GOP Sen. Bob Corker (Tenn.), who had previously been supportive of the president, now says openly Trump has failed to demonstrate “stability” or “competence.”

Trump will need votes from these senators to get anything done in Congress. Even now, almost none of them are willing to go on television to defend the president.

McConnell’s strategy — walking away from fights with the president when possible — is an act of restraint that can only last so long.

At the moment, McConnell sees more advantage in not fighting back.

For now, he is keeping his distance from the president to protect his Senate majority. For example, McConnell did not name Trump when he issued a statement on Trump’s appalling failure to assign blame to the neo-Nazis and white supremacists he has stirred into violent action.

But there is no way for McConnell to look the other way on special counsel Robert Mueller’s investigation into possible ties between Trump and Russia. Again, the president is damaging the GOP brand ahead of the 2018 elections.

In the short term, McConnell also wants to protect his GOP caucus from the president’s failed legislative agenda and the potentially ugly mud-fight in September over the budget, the debt ceiling and an infrastructure spending bill.

McConnell’s shield against the president first came into view when the majority leader kept the Senate in pro forma session over the August vacation break.

That move blocked the president from making a recess appointment of a new attorney general. And it gave McConnell added favor with Capitol Hill Republicans by making it harder for Trump to fire former senator and current attorney general Jeff Sessions.

Next, McConnell gave his Senate Republicans an answer to Trump’s self-serving rants about Congress’s failure to repeal ObamaCare.

“Our new president, of course, has not been in this line of work before,” McConnell said earlier this month in a speech. “And I think he had excessive expectations about how quickly things happen in the democratic process.”

Trump had every reason to let McConnell’s words roll off his back. But the president could not help firing back.

“Senator Mitch McConnell said I had ‘excessive expectations,’ but I don't think so,” Trump tweeted. “After 7 years of hearing Repeal & Replace, why not done?”

And Trump kept punching: “Mitch, get back to work and put Repeal & Replace, Tax Reform & Cuts and a great infrastructure Bill on my desk for signing. You can do it!” the president said in another jab via Twitter.

Trump is betting that he can turn Republican voters against McConnell because the GOP’s base sees McConnell as part of the establishment it sent Trump to D.C. to blow up.

Trump is getting support from conservative radio commentators in his war against McConnell.

My Fox News colleague Sean Hannity tweeted at McConnell, “YOU are a WEAK, SPINELESS leader who does not keep his word and you need to Retire!"

So even as disapproval of Trump’s job performance has risen to 55 percent, according to the Real Clear Politics average, he found short-term satisfaction in throwing dirt on McConnell in the hope of looking good by comparison.

It may be working with some GOP voters, but so far, McConnell’s GOP caucus is sticking with the Kentuckian.

“Passing POTUS's legislative agenda requires a team effort,” Sen. John Cornyn of Texas, the number two Republican in the Senate, tweeted in McConnell’s defense. “No one is more qualified than Mitch McConnell to lead Senate in that effort.”

Let’s not forget it was McConnell who used the so-called “nuclear option” to hand Trump the only real win of his presidency by confirming Neil Gorsuch to the Supreme Court.

And that was after McConnell kept a Supreme Court seat open for a year by refusing to hold hearings, much less a vote, on Merrick Garland, then-President Obama’s nominee to fill Antonin Scalia’s seat on the bench.

That open seat gave Trump a strong campaign talking point — his promise to appoint a conservative to the court.

It wasn’t too long ago that Republicans lived by Ronald Reagan’s 11th commandment: Thou shall not speak ill of a fellow Republican. But Trump, beginning with his name-calling during the GOP primaries, did away with all political niceties.

That’s why the Trump-McConnell version of the “Survivor” reality show will be topic number one on every media political shout-fest this fall.