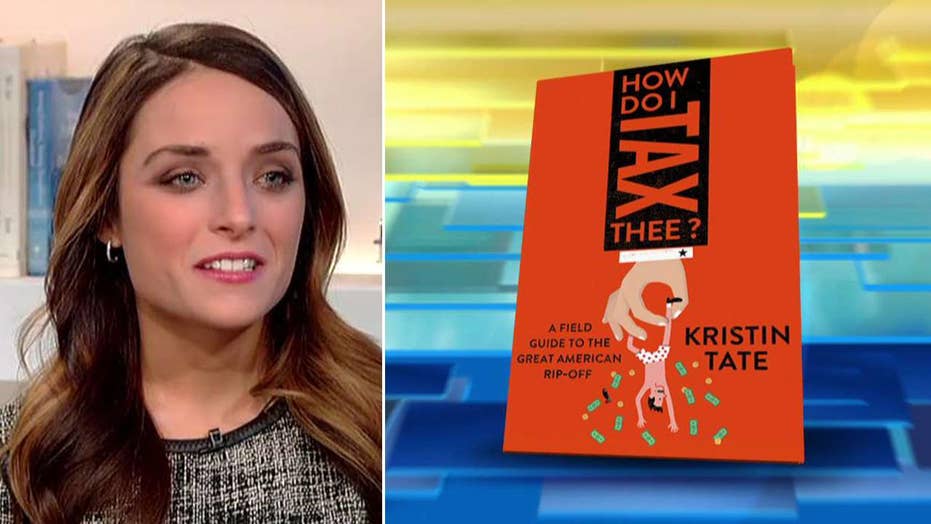 Kristin Tate's 'How Do I Tax Thee?' exposes the government shakedown.

The cable bill was the last straw, says Kristin Tate. "That's the one that really made me mad."

That motivated her to research obscure taxes and put what she learned in a new book, "How Do I Tax Thee? A Field Guide to the Great American Rip-Off."

"Yes," says Tate. "But politicians are cowards. Instead of creating a tax, they magically create these little fees (so) they don't have to tell their voters they raised taxes."

Tuesday was "Tax Day." It was April 17 this year because April 15 fell on Sunday and Monday was Emancipation Day. But by calling April 17 "Tax Day," the media miss the big picture. Income taxes make up less than half the tax most of us pay.

When you pay those hidden taxes, you may assume they go toward useful things, but Tate knows her taxes pay for government waste.

"Extreme inefficiencies, pensions that are to die for -- these amazing salaries that these public workers get that are just laughably above market." New York City's average subway worker makes $155,000 a year.

Politicians suggest their extra taxes go, not to fund those big salaries and "pensions to-die-for," but to pay for the specific services for which the taxes are named. Tate says that's rarely true.

"Cable bills and cellphone bills both have an 'Enhanced 911 Fee.' Consumers were told 911 fees were necessary to make upgrades to emergency communication needs. (But) after it was updated, instead of taking away the tax, it just stayed there."

"New York City has an eight-cent 'bagel-cutting tax,'" says Tate. For some reason, unsliced bagels are not taxed.

California has a 33 percent tax on fruit bought through a vending machine.

Maine imposes a one-and-a-half-cent per pound tax on blueberries shipped out of state.

Because these taxes sound petty, governments disguise them, says Tate, using "important-sounding language -- like 'documentation fee,' 'service charge,' or 'equalization fee.'" But most of the money raised just goes to the general budget.

"Wisconsin just renamed its 911 fee the 'Police and Fire Protection Fee,'" says Tate. "But actually, none of that money directly goes to fire or police protection. Instead it goes straight into the state's general fund."

And they still can't fund the pensions the politicians promised government workers.

"I won't pay it," says Tate. "I am technically breaking the law."

She's braver than I am. I try to follow government's stupid rules. And if I broke them, I wouldn't announce it. I figure the IRS is eager to punish government critics like me.

"I'm totally comfortable talking about that," said Tate. "They can come track me down."

They may. Governments go to great lengths to collect taxes.

Governments should drop the pretense and just charge one huge "everything tax."

Of course, then taxpayers might wake up and realize what's been done to us. That's one thing politicians don't want.