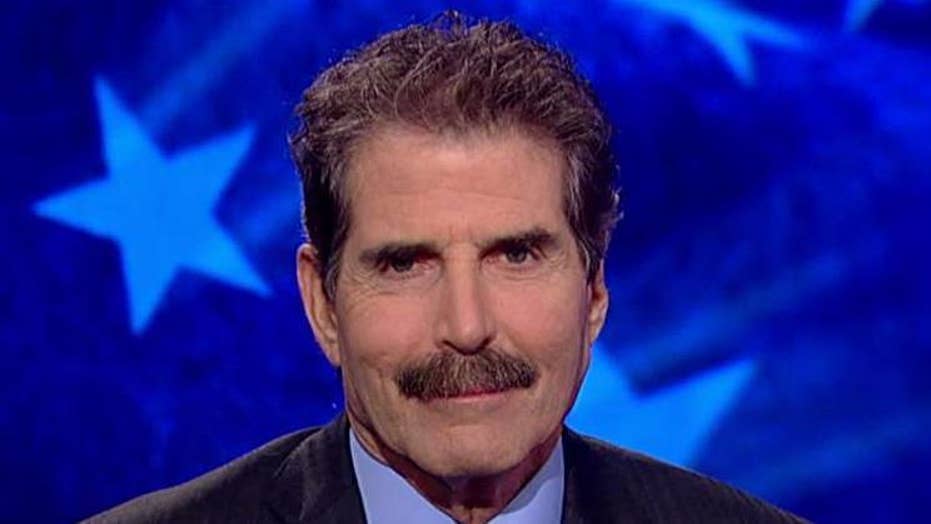 Stossel: Why climate change alarmists get it wrong

"How many once-in-a-lifetime storms will it take," demands "The Daily Show" comic Trevor Noah, "until everyone admits man-made climate change is real?!"

His audience roars its approval.

When Hurricane Irma hit, so-called friends admonished me, "Look what your fossil fuels have done! Will you finally admit you are wrong?"

No. It's the alarmists who are wrong -- on so many levels.

The global warming activists must know that because when Donald Trump joked about a lack of warming on a snowy day, they lectured us about how "weather is not climate -- one snowstorm is irrelevant to long-term climate."

A person walks through the flooded streets of a trailer park in the aftermath of Hurricane Irma, Monday, Sept. 11, 2017, in Key Largo, Fla. (AP Photo/Wilfredo Lee) (AP)

They were right then. But now that bad weather has come, they change their tune.

But Irma and Harvey came after a record 12 years without any Category 3-5 storms. Over those 12 years, did Time say the absence of storms proved climate change fear exaggerated? No. Of course not.

A boy photographs a van in a sinkhole in Winter Springs, Fla., Monday, Sept. 11, 2017, after Hurricane Irma. (Joe Burbank/Orlando Sentinel via AP) (AP)

It seems logical that warmer water may make storms worse, but there's no proof of that.

The government's own National Oceanic and Atmospheric Administration says neither its models "nor our analyses of trends in Atlantic hurricane and tropical storm counts over the past 120-plus years support the notion that greenhouse gas-induced warming leads to large increases in either tropical storm or overall hurricane numbers."

As Irma approached, The Washington Post ran an even dumber headline: "Irma and Harvey Should Kill Any Doubt That Climate Change Is Real."

Of course climate change is real! Climate changes -- it always has and always will. For the past 300 years, since "the little ice age," the globe warmed about three degrees. The warming started well before man emitted much carbon.

So the real unanswered questions are:

1. Will climate change become a crisis? (We face immediate crises now: poverty, terrorism, a $20 trillion debt, rebuilding after the hurricanes)

2. Is there anything we can do about it? (No. Not now; the science isn't there yet.)

3. Did man's burning fossil fuels increase the warming? (Probably. But we don't know how much.)

I resent how the alarmists mix these questions, pretending all the science is settled. Notice how Trevor Noah, above, tossed out the words "man-made," as if all climate change is man-made?

Politicians (and ex-politicians like Al Gore) are eager to exploit our fears by calling for more spending and regulation in the name of fighting deadly but preventable climate change -- as if feeble efforts like the Paris climate accord would have made the tiniest difference. They wouldn't. It's all for show.

A man and his sons walk on the sea floor after water receded from Hillsborough Bay ahead of the arrival of Hurricane Irma in Tampa, Florida, U.S., September 10, 2017. REUTERS/Chris Wattie - RC1CB859A7F0 (REUTERS)

A video I made about this seems to have struck a chord. It got more than a million views over the weekend.

Some people reacted with anger online: "the scientific community suggest that humans are contributing to the warming of the planet. Isn't (it) at least a little reckless to put a finger in each ear and say 'Nuh uh! LALALALALALALALALA!'"

That would be reckless. But no one advocates that. We already spend a fortune on subsidies, mandates and climate research. The real questions are outlined above.

A calmer commenter wrote, "Don't forget the hurricanes of the past. 1926 Miami, 1935 Keys, 1947 West Palm Beach, Donna 1961. People act like hurricanes like these have never happened."

One commenter added, "It's called El Nino and La Nina. We will be entering El Nino again (and) so seeing storms actually form. It shifts back and forth every 7-10 years or so. Do schools not teach these things?"

Climate fluctuates, and humans don't have too much to say about it.

Maybe someday humans will be gone. The storms will continue. But at least there'll be less hot air.