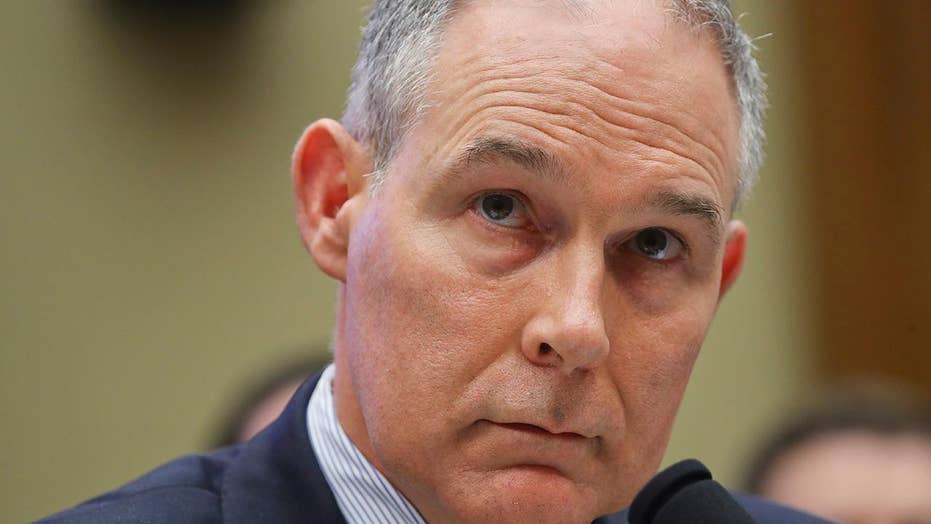 Why did Scott Pruitt, the embattled administrator of the Environmental Protection Agency, resign Thursday after surviving months of unfavorable news stories involving his controversial actions and allegations that that he had behaved unethically – and possibly illegally – in office?

First, it’s always good for a White House when a resignation breaks over a holiday period and attention is focused elsewhere. But more importantly, pressure rose for Pruitt to step down when his travails shifted from the merely humiliating to potential legal violations.

Earlier Thursday, two Democratic House members had demanded the EPA’s inspector general probe whether Pruitt might have hidden or falsified meetings or talks he had with corporate representatives.

Kevin Chmielewski, Pruitt’s former deputy chief of staff for operations, said he and other staffers had attended meetings where their boss’ official calendar was scrubbed of meetings that might “look bad.” He said Pruitt directed some of the deletions.

“We had at one point three different schedules,” Chmielewski told CNN. “One of them was one that no one else saw except three or four of us.”

The EPA denied there were any “secret calendars or schedules,” but there were clear discrepancies between internal EPA documents and Pruitt’s official calendar. There was a real chance the EPA’s inspector general could have found serious violations by Pruitt of the Federal Records Act.

Similar concerns had helped push a previous EPA administrator out the door in 2012. Lisa Jackson, President Obama’s first choice to head the EPA, had been expected to continue serving into his second term. But on December 13, 2012 the EPA’s assistant inspector general announced he would conduct an audit into Jackson’s use of private email accounts under the alias “Richard Windsor” to conduct official government business.

Chris Horner of the Competitive Enterprise Institute had brought a lawsuit to make 12,000 of Jackson’s “alias” emails public. Before that could happen, Jackson announced she would be leaving office on December 27, 2012 – apparently with the strong private encouragement of the White House.

It took three more years of litigation to get all of Jackson’s private emails released. We now know that her alias email accounts were her prime method of doing business.

One of the more infamous emails involved the billionaire inventor and businessman Elon Musk begging Jackson on her false-identity account for an emergency assist for his already heavily subsidized Tesla Motors. Musk wanted Jackson’s EPA to give Tesla a “certificate of conformity” that other companies had to formally apply for.

Jackson quickly brought in top EPA aides, asking “what can be done?” Within hours, the certificate was approved and Jackson wrote to her senior aides: “Done. Elon replied to say thank you.”

It was the fear of what the inspector general’s report might unearth that prompted Pruitt’s sudden resignation. He was already facing 14 other probes looking into his office spending, use of official planes and ethics.

So where does the EPA go from here? The job of administrator will be taken over on at least an interim basis by Andrew Wheeler, a veteran of the George W. Bush administration, who was confirmed in April as deputy administrator.

Although Wheeler was opposed by many environmentalists, he won the support of three Senate Democrats face re-election in November: Joe Manchin of West Virginia, Heidi Heitkamp of North Dakota and Joe Donnelly of Indiana.

But don’t expect too many new initiatives from the new EPA management team.

“I do believe there would be a more nuanced approach to rollbacks, if there is such a thing, compared to Mr. Pruitt’s tenure,” John Walke, clean air director at the Natural Resources Defense Council, told Axios.

Conservatives I spoke with largely agreed.

“This administration gives regulators a lot more power than most,” said an energy expert who has advised President Trump. “The White House is preoccupied with other battles, and it gave Pruitt full rein to change the EPA culture. With him gone, you can expect reforms, but with none of the hard-charging zeal Pruitt had.”

Asked to speculate on what caused Pruitt to veer so off course and make such poor judgment calls in running the EPA, my source said simply: “Pruitt had two failings. He had never worked a day in Washington, D.C., before taking the job, so he had no idea of the level of scrutiny he’d get. Second, the same personality traits that made him a risk-taker on changing policy carried over into other decisions he made. That resulted in some bizarro actions by him that no one could defend.”

So while President Trump has unburdened himself of a political liability, he now must decide if he will pay more attention to the EPA to ensure the deregulation agenda that Pruitt started is completed and expanded.

In the absence of constant pressure to change, the bureaucratic blob that is the EPA can be expected to slowly take back policy territory from the non-revolutionaries who are now in charge.