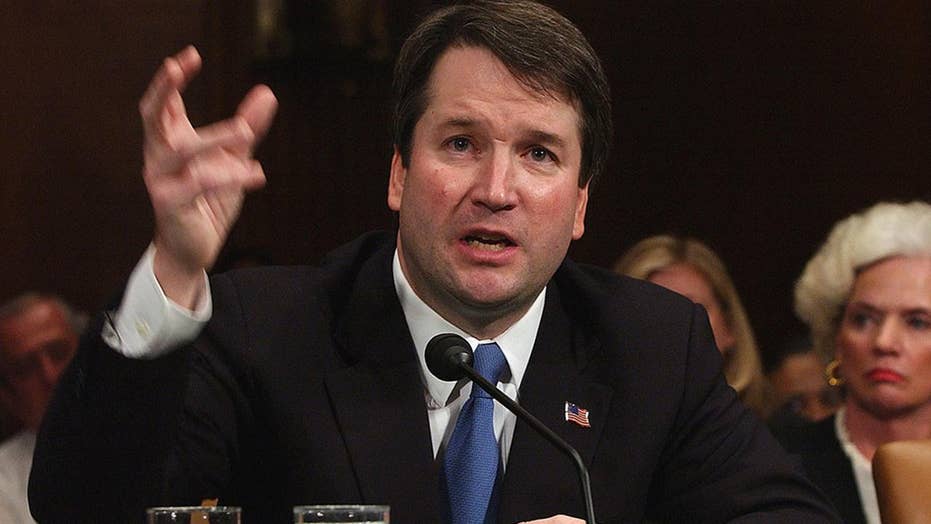 White House: Kavanaugh is focused on clearing his name

The Supreme Court nominee has nothing to hide from Democrats trying to tear him down, White House director of strategic communications Mercedes Schlapp tells 'America's Newsroom.'

History does repeat itself.

Back in 1991, a college professor named Anita Hill accused Supreme Court nominee Clarence Thomas of sexual misconduct that she claimed had occurred many years before. The accusation came at the last minute, after lengthy hearings that had shown Thomas in a highly positive light.

Senators took the charges seriously, even though Thomas, who is black, said during his nationally televised confirmation hearing that the charges amounted to “a high tech lynching.”

Now it’s happening again, with Professor Christine Blasey Ford’s accusation that Judge Brett Kavanaugh drunkenly tried to rape her when they were both teenagers at a party at a house in a Maryland suburb outside Washington.

Kavanaugh says Ford’s accusations are “completely false.” Both are scheduled to face the Senate Judiciary Committee and the country in a televised hearing Monday. However, Ford has yet to accept the committee’s invitation to testify, leading Senate Judiciary Committee Chairman Chuck Grassley, R-Iowa, to say Tuesday he might not hold the hearing Monday if Ford doesn’t agree to testify.

As with Hill’s accusations against Thomas, the way in which the accusation against Kavanaugh surfaced is highly suspect.

Back in 1991, a host of liberal Senate staffers and interest-group partisans were involved in pushing forward the last-minute allegation of sexual misconduct against Thomas.

This year, the rise of the #MeToo movement in the wake of the Harvey Weinstein sexual misconduct scandal gave the groups added hope that the Kavanaugh nomination could be sunk before a possible Democratic takeover of the Senate in the November elections. New senators elected in November will take office in January.

It’s unknown if the accusation against Kavanaugh will derail the confirmation of the judge, who has served on the U.S. Circuit Court of Appeals for the District of Columbia for the past 12 years. Hill’s accusations failed to keep Thomas off the Supreme Court, where he has served for the past 27 years.

Ford’s story is murkier and less documented than Hill’s was.

According to Ford, she never told anyone about the alleged drunken attempt at rape for 30 years, until a couples therapy session. Her therapist’s notes do not mention Kavanaugh’s name.

There is no pattern of abusive conduct whatsoever in Kavanaugh’s background. His denial of Ford’s accusations is clear and unequivocal.

“I have never done anything like what the accuser describes – to her or to anyone,” Kavanaugh said in a statement Monday. “Because this never happened, I had no idea who was making this accusation until she identified herself yesterday.”

Obviously, Ford’s accusation should be taken seriously. But we can’t ignore that her memory about the alleged incident is very vague. Ford said she thinks it happened back in 1982, but isn’t sure. She doesn’t know who owned the house where the party took place, how she got there, or how she got home.

Unless something new is discovered, this is a classic “he said-she said” issue.

Then there is the way Ford brought her accusation forward. She didn’t contact the Judiciary Committee, instead writing to a Democratic lawmaker. She didn’t send her account to the FBI for investigation.

Ford instead allowed Sen. Dianne Feinstein, D-Calif., to sit on her charges throughout a lengthy confirmation hearing and Kavanaugh’s answering of 1,238 written questions – during which time no one brought up Ford’s letter.

Ford is insisting that she wanted to remain anonymous after she wrote her letter to the highly partisan Feinstein, currently running for re-election.

But at the same time, Ford hired a lawyer, Debra Katz, who is a Democratic activist and spoke in public defense of President Bill Clinton when he was accused of sexual misconduct by Paula Jones.

After hiring Katz, Ford then took a polygraph test, which she says she passed. But such a test only shows that she probably believes the story she is telling.

All of this has prompted some honest liberals to blow a whistle. The San Francisco Chronicle, which has endorsed Feinstein for office every time since she first ran for mayor in the 1970s, published a scathing editorial questioning her actions dealing with Ford.

The editorial said that Feinstein “took the worst possible course” by waiting until almost a week after Kavanaugh’s confirmation hearing to announce the existence of Ford’s letter.

The Chronicle concluded that “Feinstein did a disservice to her Judiciary Committee colleagues, who might have wanted to determine if corroborating accounts were available, or at least question Kavanaugh about the accusation in a closed session. Instead, Feinstein’s colleagues were left in the dark.”

There is a chance that a televised Senate hearing could clear the air on Ford’s allegation. But I fear that, as with Anita Hill, the proceeding will degenerate into a media circus.

Well, Justice Ginsburg ain’t seen nothing yet. Just as with the Thomas vs. Hill showdown of 1991, I fear a new hearing on the allegation against Kavanaugh will extend the public’s cynicism about the Senate, the Supreme Court and the process by which our government appoints people to high office.

As Richard Epstein, a noted legal scholar at New York University puts it: “What sane judge would like to be the next Supreme Court nominee?”