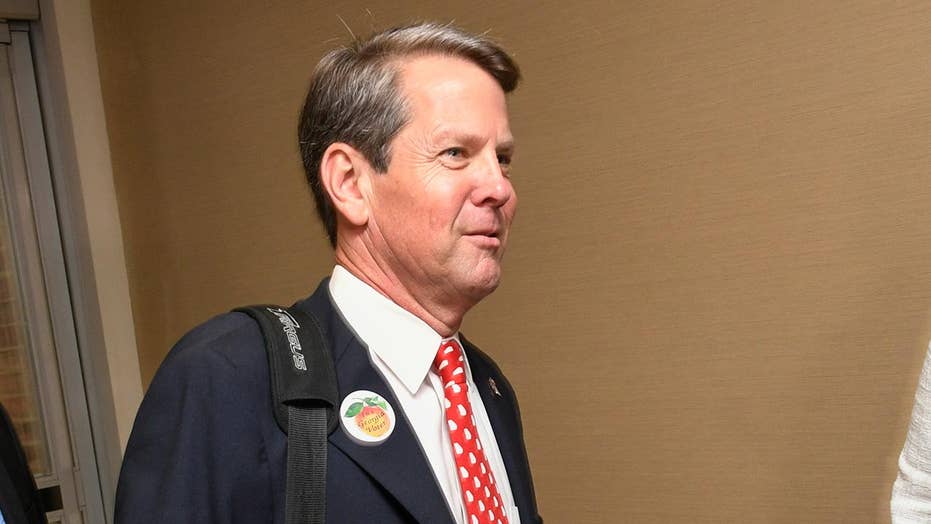 Some people are already calling the election a local version of the 2012 presidential race between Donald Trump and Barack Obama that never happened, because Trump chose not to run in that year.

When voters select the winner in November they will provide important signals about the direction of the 2020 presidential race.

In the Tuesday runoff contest to pick the Republican nominee for governor, Georgia Secretary of State Brian Kemp won with 69 percent of the vote. He crushed the establishment’s choice, Lt. Gov. Casey Cagle, with a rollicking campaign that featured Kemp brandishing his favorite rifle in a commercial.

In the ad, Kemp sat in a pickup truck and said he was prepared “just in case I need to round up criminal illegals and take them home myself.”

An admiring President Trump not only endorsed Kemp as a kindred spirit but dispatched Vice President Mike Pence to campaign with Kemp at a rally last weekend.

The Democrats already picked their nominee without a runoff last month. Stacey Abrams, the former leader of Democrats in the state House, is the first African-American to win her party’s nomination for governor. If elected, she would be the first black woman in the U.S. to become a governor.

A new USA Today poll shows Abrams and Kemp with almost even voter support, with Abrams trailing by only 45 to 43 percent.

President Trump weighed in on the race Wednesday morning, tweeting: “Congratulations to Brian Kemp on your very big win in Georgia last night. Wow, 69-30, those are big numbers. Now go win against the open border, crime loving opponent that the Democrats have given you. She is weak on Vets, the Military and the 2nd Amendment. Win!”

Abrams tweeted back in response to the president: “Proud to join the company of … other Democrats he’s campaigned against all the way to victory. Let’s add one more: Donate here.”

Abrams has been busy since 2014 building something called The New Georgia Project. It aims to register a “new American majority” made up of young people, unmarried women and minorities that she claims make up 62 percent of the state’s population but only 53 percent of its registered voters.

“We are going to inspire voters who, for the first time, see their values in the candidate, and see the investment follow those values,” Abrams says. It’s the same strategy that Barack Obama used to ride into the White House in 2008.

Kemp responds that Abrams’ approach masks the fact that she is just “an out-of-touch radical liberal who cares more for her billionaire backers” like George Soros than the challenges facing Georgians.

Democrats are pinning a lot of cash and hope on Abrams. Rolling Stone magazine just published a piece headlined “Why Stacey Abrams Is The Future For Democrats.”

Liberals believe an Abrams victory could demonstrate they can crack the solid South in 2020, much like Donald Trump cracked the Democrats’ “Blue Wall” in the Midwest in the 2016 election.

The Democrats’ path to victory in the next presidential race may lie through Georgia’s 15 electoral votes. Trump swept the South in 2016. However, reliably conservative Georgia went for him by only five points, down from Mitt Romney’s 2012 eight-point margin over President Obama.

One reason for the drop in support for candidate Trump was a reaction against him among single suburban voters, while another was a continuing flow into the booming Atlanta area of middle-class African-American migrants from the North.

Abrams admits that Georgia hasn’t been considered a swing state, but said states aren’t “swing states” until they swing – and that time is now.

Kemp and his GOP backers scoff at such claims. “Georgia is and will remain a red state,” he told me several months ago. “We will expose liberal policies that threaten this state’s prosperity and opportunity.”

For now, break out the popcorn and expect a rollicking campaign that will feature two compelling personalities. It may not quite be the Trump vs. Obama prize fight we didn’t see on the national stage, but the issues it will feature may well provide a template for how the 2020 presidential race will be fought nationwide.