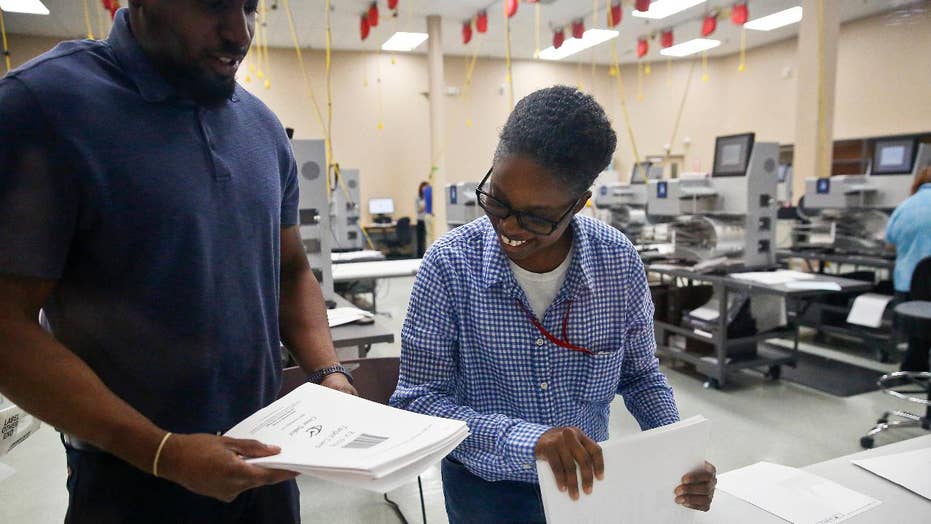 After years of dismissing concerns about election integrity, the mainstream media now has to grapple with a recount meltdown in Florida’s races for governor and U.S. Senate. Both races could go to an arduous recount of ballots by hand if the machine recount that will conclude this Thursday has either or both races ending with a margin of victory below 0.25 percent.

The epicenter of the mess is Broward and Palm Beach counties – the same counties that were at the heart of the Bush v. Gore recount mess in 2000.

The liberal media’s reporting on this situation has not been good. CNN election forecaster Harry Enten recently tweeted “‘Voter fraud’ is quickly becoming a synonym for ‘result I don’t like.’” But the problems in both counties are very real and could indeed be facilitating fraud.

In Republican governor and Senate candidate Rick Scott’s lawsuit against Democratic Palm Beach County Elections Supervisor Susan Bucher, the county court found that Bucher was illegally withholding over-votes and under-votes from the county canvassing board and barring public viewing of the counting.

Gov. Scott also filed a lawsuit against Broward County Elections Supervisor Brenda Snipes last Thursday, alleging that her office was hiding information about the number of ballots left to be counted. Again, a county court ruled in his favor as Snipes kept “discovering” new ballots.

Despite these clear rulings, the Sunday morning programs on ABC News and NBC News ignored the court orders. While it’s certainly true that claims of election irregularities and fraud shouldn’t be blindly reported, the media has an obligation to pay attention to the context.

When election officials brazenly operate in a high-handed, non-transparent manner, it only increases the suspicions of voters that their ballots haven’t been handled properly or could even have been cancelled out by people who shouldn’t be voting.

Both Broward and Palm Beach counties have a long history of election problems that make suspicion understandable. As I wrote in “Who’s Counting?,” the book I co-authored with Hans von Spakovsky, “What we really have to worry about is an election where the bureaucratic bungling is so pervasive you can’t tell where the incompetence ends and the fraud begins.”

Let’s take Broward County first. Under Snipes, elections in that county of 1.9 million people have been plagued with irregularities for years, as a report compiled by the Republican National Committee makes clear.

Politico reported that, in just the last few years, the county’s election management has become “a parade of horribles.” It concluded that Broward’s election office is “the most controversial in the entire state, if not the whole country. And there are numerous reasons, not just one.”

This year alone, Snipes has been reprimanded by courts twice: first, in May, for illegally destroying ballots during a 2016 Democratic primary; and again in August, for illegally opening mail-in ballots in secret.

Her previous exploits include leaving a medical marijuana question off of some absentee ballots, reporting some vote totals a half hour before polls closed in 2016, sending some voters too many ballot pages, leaving behind at a polling location a "provisional ballot box" that was discovered by a teacher, and designing a horribly confusing ballot that may have led to thousands of undervotes in the 2018 Senate race.

That kind of monumental incompetence creates precisely the breeding ground where fraudsters can operate both on Election Day and during recounts.

Indeed, an example of potential fraud has already been brought to light. The Miami Herald reported that Snipes included 22 ballots in the vote totals cast by voters whose signature did not match the signature on file. Ballots with mismatched signatures are prohibited by state law.

But Snipes included them anyway in a batch of 205 provisional ballots. Since the votes were mixed together, there is no way of separating out fraudulent votes from the batch. Who knows what other irregularities that shade into fraud will be uncovered?

Then there are the problems in neighboring Palm Beach County. Bucher, the election supervisor there, is now blaming outdated technology for the fact that her county’s machine recounts of the races for governor and U.S. Senate won’t be finished by the Thursday deadline. “It’s impossible,” she says.

What apparently is also impossible is for Bucher to comply with court orders. Last week the Scott campaign sued her for having her staff duplicate at least 650 damaged ballots. The law specifies that the ballots must first go to the county’s canvassing board. Instead, Bucher doubled-down and tried to block media cameras from covering the deliberations of the canvassing board.

When election officials brazenly operate in a high-handed, non-transparent manner, it only increases the suspicions of voters that their ballots haven’t been handled properly or could even have been cancelled out by people who shouldn’t be voting.

The Florida media, which knows the history of Broward and Palm Beach counties well, is doing a good job. But national media outlets are under pressure to justify their previous dismissals that ballot integrity is at risk in America’s elections.

As the watchdog site Newsbusters reports, some national media outlets appear to be engaged in an effort “to obfuscate what’s actually going on in Florida and to actively suggest any questions otherwise was a part of some conservative conspiracy theory.”

But the facts in Florida are actually disturbing enough that they should engage the media’s investigative teams, which have been spending so much time on Russian involvement in the 2016 election.

Russian media bots did try to influence the 2016 election in a pathetically incompetent way. But the incompetence in Florida could actually lead to a real perversion of democracy that really undermines faith in our electoral process.