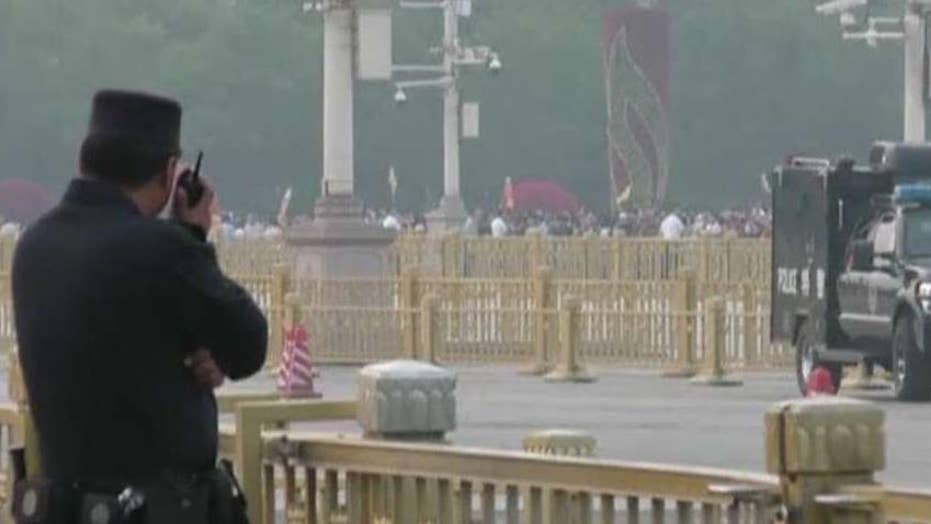 The anniversary isn't officially acknowledged in China and authorities have cracked down on dissidents speaking out about it; Kitty Logan reports from London.

His speech at this week’s Shangri-La Dialogue security summit in Singapore would have been jarringly out of place in Hilton’s utopian land of peace and tranquility nestled in the Tibetan highlands.

Wei’s words for the United States were anything but serene. “A fight?” he declared, “Ready. Bully us? No way.”

The unusually bellicose barrage from a senior Chinese official at a stately global forum was a bit of an eyebrow raiser, but not really much to worry about. In fact, it is yet another sign of how much Trump has flummoxed and confounded the boys from Beijing.

Chinese President Xi Jinping must really miss the heady days of 2017. At the 19th Party Congress, he spoke boldly of his vision for making China a global power. Later, he jetted off to Mar-a-Lago to tip champagne with the new American president. Trump spoke glowingly of future cooperation between the two countries, and Xi came away thinking he’d have no problem handling the novice president.

Fast forward to Minister General Wei’s imitation of the Oscar the Grouch. What went wrong? For China – plenty.

For starters, it is difficult to over-emphasize how much Xi’s “vision” at the party Congress served as a trigger warning to the rest of the world. To Xi, the plan for a global band of belts and roads with China at the hub sounded like an opportunity and gift to the world. To others, it sounded like the revenge of the Opium Wars, with the Chinese recreating the most extreme excesses of the British Empire in reverse – a systematic campaign of exploitation and domination, without any of the liberalizing impulses of the British peoples.

Then, some of the biggest jewels of Beijing’s belt-and-road crown started to look like paste. Beijing’s port deal in Sri Lanka turned out to be a massive debt trap for the island nation. Pakistan’s “economic corridor” deal with Beijing has so far done little more than drive Islamabad to unprecedented depths of insolvency.

China’s brand has not yet gone the way of New Coke, but it has taken a beating. Worldwide, nations are actively debating if buying Chinese telecom equipment will put their national security in peril.

And China’s abysmal human rights record continues to alienate many. Putting a million Uighurs in concentration camps didn’t help. But even Beijing’s smaller outrages – such as occurred recently at a Canadian university, where Chinese foreign students organized a bullying campaign against a Tibetan student leader – are getting attention.

Meanwhile, Trump has not proved to be putty in Xi’s hands. Rather, Xi has his hands full with a trade war – and just when China’s economy can least afford one.

Moreover, since the Mar-a-Lago Love Fest, the U.S. has upped its support for Taiwan and conducted several freedom of navigation operations in the South China Sea. These actions are correct, but they are in no way calculated to win friends in Beijing.

All this has left Beijing scrambling to keep its narrative about China’s inevitable rise alive. Chinese officials are busy rebranding the Belt and Road initiative, as well as renegotiating some debt deals.

Amid all that came the diatribe from Wei. But as China expert Dean Cheng, my colleague at Heritage, notes, this wasn’t the beating of war drums. Wei was simply playing his part in China’s version of good cop, bad cop.

Here’s how it works. Beijing lets the general vent, and then circles back with quiet diplomacy suggesting something like: “You know, we won’t be able to keep these hardliners in line, if the U.S. keeps pressing us.”

This is an almost comical attempt at cowing Trump, who is arguably the world champion of good cop-bad cop diplomacy. And while Minister Wei blustered and puffed at the Singapore dialogue, U.S. officials were touting plans for a free and open Indo-Pacific, which sounds a lot friendlier than a world where everybody is a suburb of Beijing.

China now knows that Mar-a-Lago was no Shangri-La and that dealing with Trump is not all champagne and smiles.