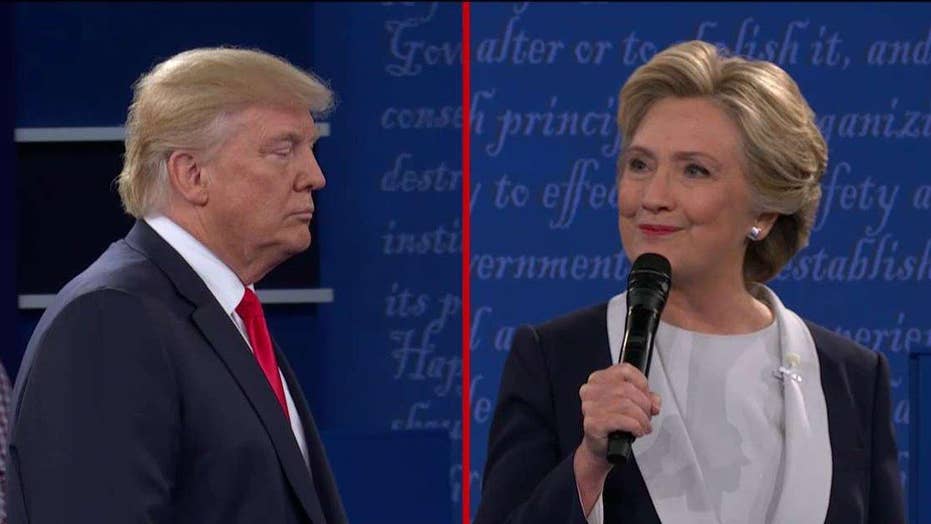 'One on three'? Trump takes issue with debate moderators

Sunday night’s moderators Anderson Cooper, from CNN, and Martha Raddatz, from ABC, virtually took the field wearing blue jerseys with “I’m with her” on the back. Just as in baseball, candidates and moderators certainly used their bats. Both candidates talked about the other’s treatment of women and neither looked good. Clinton questioned Trump’s “fitness to be our president” and Trump countered with naming the victims of Bill Clinton’s sexual advances and saying “I think she should be ashamed of herself” about how they were treated.

Left-wing Politco called the debate “brutal” and former politcal reporter Ron Fournier called it “depressing.” CNN’s senior media correspondent Brian Stelter asked, “Where have I seen this version of Trump before? Oh. Just remembered,” as he tweeted out images of Trump from the days when he was involved in pro wrestling. CBS’s Bob Schieffer called it “WrestleMania.” But the liberal media who wanted to smack Trump around clearly failed.

A Drudge Report headline leading up to the debate said it best: “TONIGHT: TRUMP VS. WORLD.” That was certainly the case as moderators interrupted, talked over and at one point even debated Trump.

Cooper started the fireworks on the second question with four follow-up questions attempting to skewer Trump on the latest video controversy about offensive things he said on an open mic. That set the tone for the evening and it wasn’t a neutral one. The interruptions were bad. The outright speaking for Clinton was worse.

Cooper started the fireworks on the second question with four follow-up questions attempting to skewer Trump on the latest video controversy about offensive things he said on an open mic. That set the tone for the evening and it wasn’t a neutral one. The interruptions were bad. The outright speaking for Clinton was worse.

About 68 minutes into the debate, Raddatz lost her composure, angry that Trump hadn’t answered what she wanted. That led to an embarrassing exchange for Raddatz that was skewered on Twitter. “Mr. Trump, let me repeat the question. If you were president, what would you do about Syria and the humanitarian crisis in Aleppo? And I want to remind you what your running mate said. He said provocations by Russia need to be met with American strength and that if Russia continues to be involved in air strikes along with the Syrian government forces of Assad, the United States of America should be prepared to use military force to strike the military targets of the Assad regime.”

There were six separate Raddatz interruptions in that question, including her actually arguing with Trump. That featured this stunning exchange:

Trump: “Why do they have to say we're going to be attacking Mosul within the next four to six weeks, which is what they're saying? How stupid is our country?

Raddatz: There are sometimes reasons the military does that. Psychological warfare.

Raddatz: It might be to help get civilians out.

Twitter exploded with Raddatz criticism as a result. Trump adviser and former House speaker Newt Gingrich spoke for many: “Why is Raddatz debating trump? Isnt that hillarys job?”

At one point, Trump promised to call a special prosecutor for Clinton’s email scandal. During Clinton’s response, Trump commented that she’d be “in jail.” CNN’s Dana Bash later compared Trump to African dictators, Stalin and Hitler for it. Bash called it “stunning.”

Debate reaction was predictably polarized. Media Research Center president Brent Bozell (Hint: My boss) bashed the obvious debate bias when the issue of Russia trying to influence the election came up. “Who is working harder to affect the American election: Russia or the leftist US media?” he wrote.

Clinton foreign policy spokesman Jesse Lehrich spokesman used Twitter to tell Trump to "go f--k" himself, wrote The Hill. Politico reporter Louis Nelson took the pro-Raddatz media line: “Lots of love for Martha Raddatz tonight, but I'd bet my next paycheck that Trump's surrogates will complain about her a ton tomorrow.”

CNN’s Stelter pre-warned of the debate theme journalists wanted – Trump vs. women but that wasn’t what played out. “The gender dynamics -- a man and a woman moderating together while another man and woman face off in a town hall format -- will be unmissable,” he wrote.

Those dynamics weren’t exactly as the media planned and that might have limited both the moderators and Clinton. Four Clinton accusers – Paula Jones, Kathy Shelton, Juanita Broderick and Kathleen Wiley – were in the front row of the debate audience as testament to how they had been treated by both Bill and Hillary Clinton.

The debate involved questions from 40 “uncommitted” voters selected by Gallup.-- Not that anyone in America understands how anyone could be uncommitted with just 30 days to go until November 8.