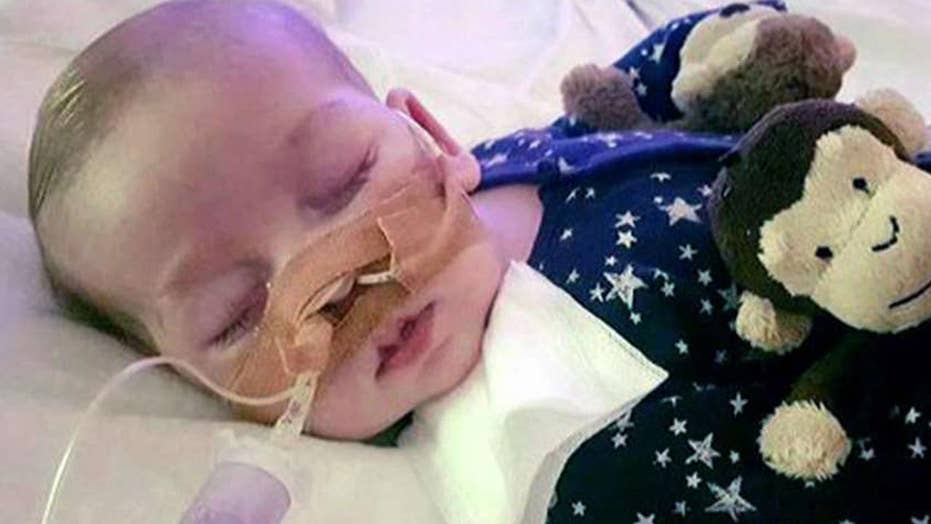 Birthdays are a celebration of life, and Charlie Gard’s is no different. Even after his death.

On Friday, August 4, the British baby who broke the world’s heart would have turned 1. He didn’t.  According to his family, he ran out of time – time stolen by the UK courts, as Charlie’s hospital sought legal permission to remove his life support. But there’s another, less obvious, time-devouring culprit: the media.

I see it as a culture editor, tracking their (non)-coverage of the Washington, D.C. March for Life. I see it as a young woman, perusing reports that insist my “health care” depends on abortion, the death of another.

But while the liberal media eagerly dance to death’s tune, one person is changing their beat. Like him or not, his impact is undeniable: President Donald Trump is forcing life into the national media spotlight. And little Charlie’s story is proof.

As an infant, Charlie was diagnosed with a rare genetic condition, mitochondrial DNA depletion syndrome. Parents Chris Gard and Connie Yates challenged his London hospital and the British court system in a months-long effort to bring their son to the United States for experimental treatment. They ended their legal fight at the end of July.

Death is the liberal media’s default.

“[T]here is one simple reason why treatment cannot now go ahead,” the father urged after an American specialist examined Charlie. “A whole lot of time has been wasted.”

That includes time by the media.

Charlie Gard may have been a British infant, but he was also an international story. An American story. As courts claimed to rule “in Charlie’s best interests” against prolonged suffering, several factors should have jumpstarted media interest: Pope Francis’ support, an outcry by pro-life leaders and conservative media, our country’s own health care debate.

But it wasn’t until President Trump tweeted an offer to “help little #CharlieGard” that the media woke to the story. Hours after, the three broadcast networks (ABC, CBS, NBC) began their news-show coverage of Charlie. That, in turn, was followed by support from hospitals around the world, celebrities and members of Congress.

Even then, the networks aired embarrassing discrepancies. As a judge revisited Charlie’s case following the outcry, they prioritized a “highly anticipated” photo of Beyonce’s healthy twins over sickly Charlie. They even covered the death of a baby orca more than the impending death of baby Charlie.

Then there was the ABC anchor who accused the parents of holding “false hope,” while a foreign correspondent described the situation as "a battle between parental instinct versus medical reason."

But how the networks covered it may not have been as vital as when they covered it. “Time has been wasted.”

They held out until a tweet from the president. And this isn’t the first time he forced the networks to cover life. In years past, the news shows have dedicated mere seconds to the March for Life, the largest annual Washington, D.C., rally that condemns abortion. In 2017, I watched those seconds grow to more than 21 minutes. There was one big difference: President Trump, who tweeted support, sent his vice president and White House counselor to speak and called out an ABC anchor for censorship.

Death is the liberal media’s default. There’s the inexcusable silence of the undercover Planned Parenthood videos. There was the blackout of the atrocities by Philadelphia abortionist Kermit Gosnell in 2013.There’s the networks’ defense of Planned Parenthood in 2012 when breast cancer charity Susan G. Komen for the Cure temporarily decided to the defund abortion giant.

And that’s just abortion. There’s also the Lifetime euthanasia drama starring a doctor “ending lives with dignity.” There’s the 2016 assisted-suicide film, Me Before You. There’s the series by HBO and VICE that showed a woman dying on camera. The magazine world promoted a son’s “gift of death” to his mother. And the liberal media’s new standard became most noticeable in 2014 when they “applauded” Brittany Maynard’s “ethical” choice to die in California.

Instead of journalists voicing victims, they are creating them by censoring life and promoting death. We don’t know what would have happened if Charlie had been treated, if it had been done quickly, if his story had been reported to the public sooner. But let’s make an effort to know next time.

Katie Yoder is a staff writer for the Media Research Center's Culture and Media Institute where she is a Joe and Betty Anderlik Fellow. Follow her on Twitter@k_yoder.