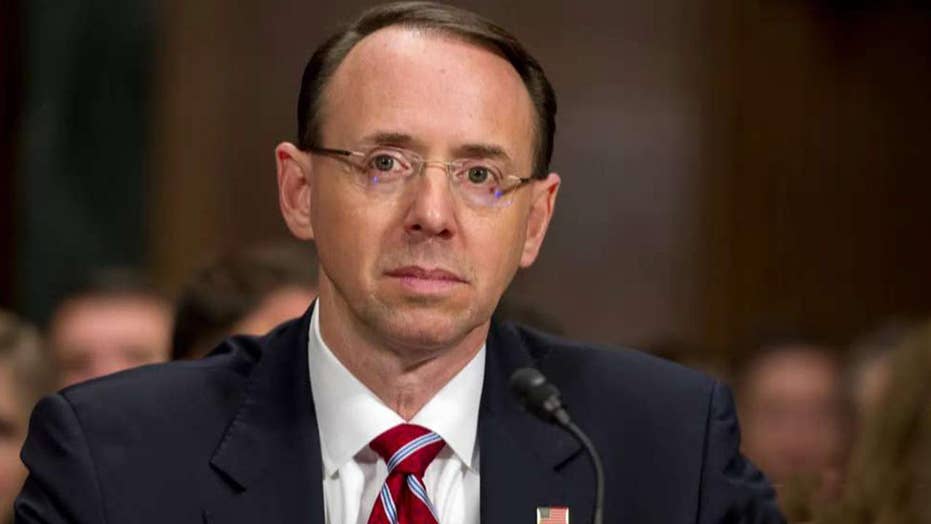 Backers of the impeachment resolution are upset that Rosenstein has failed to fully comply with a congressional subpoena for information about FBI and Justice Department investigations of the Hillary Clinton email scandal.

In addition, the impeachment resolution accuses the Justice Department and FBI of committing “alleged abuses of the Foreign Intelligence Surveillance Act related to members of the Trump campaign” who were investigated by the two law enforcement agencies.

However, House Speaker Paul Ryan, R-Wis., made clear Thursday that the impeachment resolution isn’t going to come to a vote of the full House, because he said he opposes it. Hours after he spoke, House members left the Capitol to begin a five-week recess.

The complaints against Rosenstein do not allege misconduct serious enough to justify impeachment under the Constitution, Ryan told reporters.

The House speaker is correct. The Constitution sets a high standard for impeachment: “Treason, Bribery, or other high Crimes and Misdemeanors.” The offenses do not include lack of cooperation with a congressional oversight investigation.

As the Heritage Foundation’s Guide to the Constitution says, “it is agreed by virtually all that the impeachment remedy was to be used in only the most extreme situations, a position confirmed by the relatively few instances in which Congress has used the device.”

The Republican House members seeking Rosenstein’s impeachment are understandably frustrated by the Justice Department’s lack of cooperation with oversight investigations being conducted by the House Judiciary Committee and the Committee on Oversight and Government Reform.

But even in the extraordinarily unlikely event that Ryan changes his mind and a majority of House members vote to impeach Rosenstein, there are currently not enough votes in the Senate to convict him.

The seven-page impeachment resolution filed by the 11 House members outlines how the Justice Department, under Rosenstein’s leadership, has refused to fully comply with document requests from Congress. Attorney General Jeff Sessions has recused himself from the investigations that Rosenstein is supervising.

According to the resolution, the Justice Department has: missed document production deadlines; redacted “pages to the point where they contain little probative information;” “knowingly and intentionally withheld documents within the scope of the joint congressional investigation to avoid oversight;” and “instructed material fact witnesses to refuse to provide testimony.”

There is no question that Congress has the authority to examine in-depth the prosecutorial and investigative decisions made by FBI agents and Justice Department lawyers.

The Constitution grants Congress far-reaching oversight authority with regard to the executive branch. That includes the Department of Justice, which is not some independent entity that does not have to answer to Congress.

In a 1975 case, Eastland v. U.S. Servicemen’s Fund, the Supreme Court said that the “scope of Congress’s inquiry … is as penetrating and far-reaching as the potential power to enact and appropriate under the Constitution.”

That power, according to a 1957 Supreme Court decision, Watkins v. U.S., is at its peak when Congress is investigating “corruption, maladministration, or inefficiencies in the agencies of Government.”

In response to such oversight, the Justice Department doesn’t have the legal authority to withhold any information, documents, or witnesses that a congressional investigation wants to review, examine, or question.

There is only one constitutionally recognized exception to that – if the president asserts executive privilege. Every president has the ability to protect the confidentiality of documents and internal executive branch communications from disclosure to the legislative and judicial branches. This right has been recognized since George Washington was president.

In active law enforcement investigations, the Justice Department may often have legitimate reasons for wanting to withhold information. For example, it may wish to protect the rights of innocent parties, conceal the identity of confidential informants, or prevent disclosure of prosecution legal strategy.

But none of those concerns allows the Justice Department to avoid complying with oversight requests by an insistent congressional committee investigating possible corruption and malfeasance.

President Trump has not asserted executive privilege with regard to any of the documents or communications connected to the Russia collusion investigation by Special Counsel Robert Muller or the Clinton email investigations.

These matters are within Congress’ oversight authority. Congress has tools for exercising that authority, even when an executive branch agency resists.

One tool is Congress’ appropriations authority – hitting an agency and even particular officials with funding cuts that will force cooperation. However, this is a blunt instrument that can be difficult to wield and may not have any effect on a defiant official.

The second tool is to hold an uncooperative official in contempt of Congress, which is a federal crime punishable by both jail time and a fine. But the contempt resolutions approved against former Attorney General Eric Holder and former Internal Revenue Service official Lois Lerner showed that this tool may not guarantee success.

Congress held Holder in contempt in 2012 for his refusal to turn over documents about Operation Fast and Furious, a botched federal investigation of illegal gun trafficking.

Lerner was held in contempt in 2014 for refusing to answer questions about her alleged targeting of conservative organizations.

Since impeachment is not the proper remedy in an oversight dispute between the legislative and executive branches, frustrated lawmakers may need to move to a Plan B. Justice Department funding cuts, anyone?