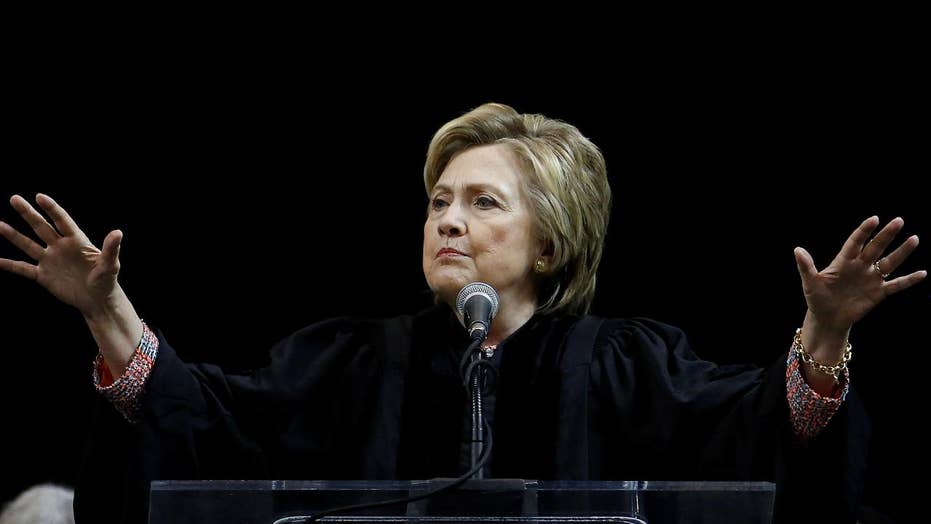 There’s nothing untoward about the former 2016 Democratic presidential nominee writing a book on her experiences in the campaign. Both the subject matter and the timing of the book’s release are unremarkable by historical standards. What breaks the mold is, however, Clinton’s motivations and also how she goes about achieving them.

It should be clear by now that the former secretary of state is speaking exclusively to her fellow Democrats in an urgent effort to polish her tarnished legacy, and she’s embraced some rather cloying and disingenuous methods in the process of achieving this mission objective. Even if Clinton hasn’t quite perfected the practice, she has adopted the abrasive Clintonian habit of saying things she insists she’s not saying at all.

The most recent example of this repellant propensity comes to us by way USA Today. When asked by the paper’s Susan Page about the explosive charge at the center of Robert Mueller’s special counsel probe into Donald Trump’s campaign—the question of whether there was explicit cooperation between the Trump camp and the Russian government—Clinton insisted that there was collusion. "I'm convinced of it," the former first lady averred. "There certainly was communication, and there certainly was an understanding of some sort.”

In this June 5, 2017 photo, former Secretary of State Hillary Clinton speaks at a fundraiser for the Elijah Cummings Youth Program in Israel in Baltimore. The FBIÃ¢â¬â ¢s Hillary Clinton email investigation that ended without charges remains a lingering grievance for President Donald Trump, who holds it up as an example of a Ã¢â¬ÅriggedÃ¢â¬Â system. (AP Photo/Patrick Semansky) (AP)

"I happen to believe in the rule of law and believe in evidence, so I'm not going to go off and make all kinds of outrageous claims,” Clinton continued. “But if you look at what we've learned since (the election), it's pretty troubling.” In this ham-fisted fashion, Clinton gets to have it both ways. Her defenders can insist that she is not making any “outrageous claims,” as she says, while simultaneously making the outrageous claim that Trump associates indulged in the near-treasonous enterprise of working with the Kremlin to advance the president’s political prospects.

This is a familiar tendency. In post-election interviews, Hillary Clinton has gone out of her way to insist that she accepts full responsibility and blame for her 2016 loss. She is quick to note, though, that myriad other factors deserve at least honorable mention for the course of events that led to the Trump presidency.

FILE - In this Sept. 26, 2016 file photo, Republican presidential nominee Donald Trump and Democratic presidential nominee Hillary Clinton shake hands during the presidential debate at Hofstra University in Hempstead, N.Y. Months after her defeat in the election some have speculated she might run for elected office again, a possibility she hasn't flat-out denied, but has said she doesn't expect to happen. Friends say it's unlikely. (AP Photo/David Goldman, File) (AP)

“I was the candidate. I take absolute personal responsibility,” Clinton told CNN’s Christiane Amanpour in a May 2017 postmortem. If she truly meant it, that would be the end of it. But it wasn’t.

“If the election had been on October 17, I would be your president,” Clinton added. “I was on the way to winning until a combination of Jim Comey’s letter on October 28 and Russian WikiLeaks raised doubts in the minds of people who were inclined to vote for me and got scared off.” She went on to blame debate moderators, too, who she said declined to ask the most important question of the election: “exactly how are you going to create more jobs?” In fact, this was the very first question of the very first debate. Finally, and of course, Clinton was asked if she was “a victim of misogyny,” to which she answered “yes.” At some point in the 12 days between October 28 and November 8, apparently, America became so prohibitively misogynistic that it could not countenance the idea of a woman in the Oval Office.

Clinton has repeated this tactic in a variety of subsequent interviews. “You know, maybe I missed a few chances,” she told “CBS Sunday Morning" anchor Jane Pauley in an interview that aired September 10th. And yet, Clinton insisted that she also struggled to overcome America’s vestigial “sexism and misogyny” (a factor she noted no fewer than three times in that interview). That’s to say nothing of America’s residual racism. "[Trump] was quite successful in referencing a nostalgia that would give hope, comfort, settle grievances, for millions of people who were upset about gains that were made by others,” Clinton tap danced. “What you're saying is millions of white people,” Pauley interjected. "Millions of white people, yeah,” the former first lady agreed.

In her book, Clinton included her former boss, President Barack Obama, in her list of people and phenomena responsible for robbing her of her right of succession. “I do wonder sometimes about what would have happened if President Obama had made a televised address to the nation in the fall of 2016 warning that our democracy was under attack,” Clinton wrote. “Maybe more Americans would have woken up to the threat in time. We'll never know.”

Some of these grievances are more legitimate than others. To be sure, Hillary Clinton and the entire United States should regard Russia as a hostile entity. Every legitimate intelligence assessment suggests Moscow directed the efforts to infiltrate Democratic email accounts and those of Clinton’s campaign staff, and laundered them via a third party through WikiLeaks. That’s not just personally invasive; it was an attack on American sovereignty. Surely these actions did have an impact on the election—albeit one that’s impossible to quantify. More measurable was the impact James Comey’s letter had on state of the race, even though it was a letter he was obliged to send and the result of Clinton’s own recklessness. Racism, sexism, “collusion,” and half a dozen other imprecise and indeterminate factors, however, amount to a security blanket for shaken liberals. The progressive commentary class responds to their invocation like Pavlov’s dogs do the dinner bell. And that’s the whole point.

The former first lady is, in effect, emotionally manipulating her former constituents and arresting their process of coming to terms with the results of the 2016 election. By insisting she accepts full responsibility, even if she doesn’t, and that she’s not making any outrageous allegations regarding the Trump campaign’s collusion with Russia, even if she is, Clinton is mobilizing a coalition.

When conservatives allege that she is shifting blame, Clinton’s supporters will instinctually ride to her defense armed with her quotes claiming otherwise. When Clinton’s detractors claim she is irresponsibly getting ahead of the investigation into the events of 2016, her supporters will marshal evidence in support of the contention that she is not. This dynamic yokes Clinton’s voters to the former candidate in a familiar tribal battle with her Republican opponents. It stops Democrats from reckoning with and moving on from the events of 2016. And that suits Hillary Clinton just fine.

Noah Rothman is the author of “Unjust: Social Justice and the Unmaking of America,” available on January 29 from Regnery Publishing.