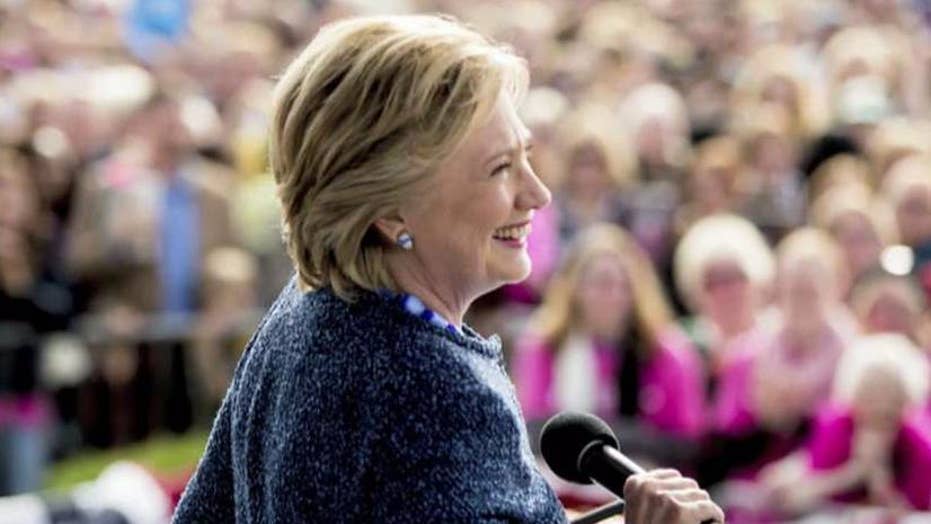 Inside the investigation on the 'real' Russia scandal

House Intel Chairman Devin Nunes gives the latest on new investigations on the Obama-era uranium Russia deal and the FBI's handling of the case and Sen. Chuck Grassley's call for a special counsel. #Tucker

The Russian nuclear deal continues to be kept under containment by media fearful that it might contaminate their ability to attack President Trump.

In the latest development, The Hill reported that, an FBI informant was cleared to testify on the issue. “The Justice Department on Wednesday night released a former FBI informant from a confidentiality agreement, allowing him to testify before Congress about what he witnessed while undercover about the Russian nuclear industry’s efforts to win favorable decisions during the Obama administration,” the newspaper said.

None of the broadcast networks mentioned this development through Thursday evening. That’s not surprising. Hillary Clinton told C-SPAN earlier in the week that the latest allegations were “the same baloney they’ve been peddling for years.” And the media typically take their cues from top Democrat lawmakers.

“Face the Nation” moderator John Dickerson did end the network blackout of the story Sunday. His CBS report was the first of ABC, CBS and NBC to note the scandal that other outlets have tried hard to discredit. Those 69 seconds continue to be the only mention of the story.

That’s especially humorous given all the other stuff networks have time for, especially quirky stories. According to a Newsbusters analysis (hint: where I work): “The networks' blackout is all the more striking given the airtime those shows have already devoted this year to wacky conspiracy theories and urban legends, including the disappearance of Amelia Earhart, the Loch Ness monster, alien abductions, ghosts and even ‘lizard people.’”

That’s 4 minutes, 11 seconds – or nearly four times as much coverage – for the Loch Ness Monster compared to this scandal. And, even if you don’t like the story, it is notable because of all the other media coverage of Russia – 1,000 minutes on Trump-Russia collusion in 2017.

CNN broke the Halperin story with a damning lede: “Veteran journalist Mark Halperin sexually harassed women while he was in a powerful position at ABC News, according to five women who shared their previously undisclosed accounts with CNN and others who did not experience the alleged harassment personally, but were aware of it.” According to Axios, Halperin lost his TV gig, as well as a book and a TV deal.

The allegations are disturbing. “Three of the women who spoke to CNN described Halperin as, without consent, pressing an erection against their bodies while he was clothed. Halperin denies grabbing a woman's breasts and pressing his genitals against the three women,” according to CNN.

Halperin apologized for having pursued relationships with coworkers, “including some junior” to him. He is also known for authoring the book “Game Change” about the 2008 presidential election, which was later turned into a movie. He had just returned to the NBC universe earlier this year.

New Republic’s Wieseltier was set to head up a new magazine named Idea before sexual harassment allegations surfaced. According to Politico: “Wieseltier was also accused of ‘workplace harassment’ on an anonymous list (of men working in the media) circulating … that’s having reverberations in the industry.”

Wieseltier issued a formal apology: “For my offenses against some of my colleagues in the past I offer a shaken apology and ask for their forgiveness.”

HuffPost also targeted Wieseltier in a story headlined: “‘I Was Blind And Complicit and Just, Like, Did Nothing’: New Republic Staffers Speak Out.”

That article indicated the allegations were years in the making. “Soon after the long-whispered allegations concerning Hollywood mogul Harvey Weinstein came to light, former editors and writers at The New Republic, a 103-year-old political magazine, started emailing each other to share decades of stories about Leon Wieseltier, the magazine’s longtime literary editor.”

Those are far from the only new incidents in media. Director James Toback has more than 200 accusations against him. Celebrity photographer Terry Richardson and tech blogger Robert Scoble were two of the lesser names to be accused.

There were also celebrity accusers. Former “Hercules” actor Kevin Sorbo complained he had been harassed by the late fashion designer Gianni Versace.

Oddly, in this time of heightened awareness of harassment, TV host Ellen DeGeneres tweeted a picture of herself ogling the breasts of singer Katy Perry. DeGeneres, who came out as gay 20 years ago, commented above the photo, “Happy birthday, @KatyPerry! It’s time to bring out the big balloons!” She was much criticized on social media after the posting.

3. Flake-y News Coverage: Arizona Republican Sen. Jeff Flake announced he wouldn’t be seeking re-election in 2018 and skewered President Trump in the process. Naturally, the media loved it. Lefty Slate described it as “Sen. Jeff Flake Announces Retirement in Scorching Speech Against Trump.” One thing notably absent from most of the coverage was how Flake was unlikely to win his primary challenge.

News outlets celebrated yet another Trump opponent and used the opportunity to talk about the left’s favorite issue – impeaching or removing Trump from office. “CBS This Morning” co-host Norah O’Donnell asked Flake on air about Trump: “If he is dangerous to democracy, as you say, should he be removed from office?”

Preston then went on to treat Flake’s attack on President Trump like Martin Luther King Jr.’s “I Have a Dream” speech. “This is the type of speech that, I think, tomorrow that should be shown, should be listened to by every high school civics class, politics class, history class and the reason being is we're at a moment in time right now where there's so much divisiveness in the country,” he urged.

MSNBC pretend-conservative Joe Scarborough was thrilled by the speech, talking about the dangers of “a tyrannical president.” Then he went on a typical rant blaming Trump for the end of the GOP, saying: “What we’re seeing here is the – it’s political suicide. It's the coming end of the Republican Party where you are losing guys who are temperamentally moderate.” That last part is, no doubt, intended to include Scarborough, who used to be considered conservative but makes millions from MSNBC not to be.

4. CNN, MSNBC and Media Fails: Into every life a little rain must fall. That applies to news outlets as well. Both CNN and MSNBC had thoroughly humorous incidents this week in their quest to lead the anti-Trump resistance.

CNN produced a silly anti-Trump commercial about facts that used bananas and apples to teach the press that CNN stands behind them. “This is an apple. Some people might try to tell you that it’s a banana,” the segment begins, pretending that CNN only tells its viewers facts.

Both Daily Caller and BuzzFeed mightily mocked the commercial with the Caller adding to the CNN “Facts First” tagline: “UNLESS WE ARE REPORTING ON TRUMP.” The Blaze’s Dana Loesch won the Twitter commentary wars by snarking: “But what if it’s an apple that identifies as a banana.”

MSNBC had its own embarrassment. Reporter Jacob Soboroff went to the U.S.-Mexico border as three illegal immigrants jumped over the fence. It’s not often that MSNBC ends up aiding President Trump, but it did so this time, boosting the argument for a border wall.

5. Hurray for Hollywood: It’s a tough battle in Tinseltown this week over which star can say the most idiotic thing. First, there’s sometime comedian Kathy Griffin, fresh from hacking a phony Trump head. Now she’s angry at those who abandoned her, including CNN anchor Anderson Cooper, who she called “The Spineless Heiress.”

Then there’s actress Lena Dunham freaking out that embattled, left-wing ESPN host Jemele Hill followed her on Twitter. “Holy s--- @jemelehill following me is like finding out definitively that God is here and she reads your blog. Fan dance.”

Long-time liberal singer/actor Harry Belafonte made the now-common Trump era comparisons to Nazi Germany, noting that “the country made a mistake and I think the next mistake might very well be the gas chamber and what happened to Jews (under) Hitler is not too far from our door.”

The CW’s “Supergirl” continues to show its superpower is propaganda. The latest episode depicted Americans as anti-Mexican and anti-gay. The CW’s other superhero show “Legends of Tomorrow” introduced a Muslim superhero from the future. The character was added in a post-election fit of PC pique.