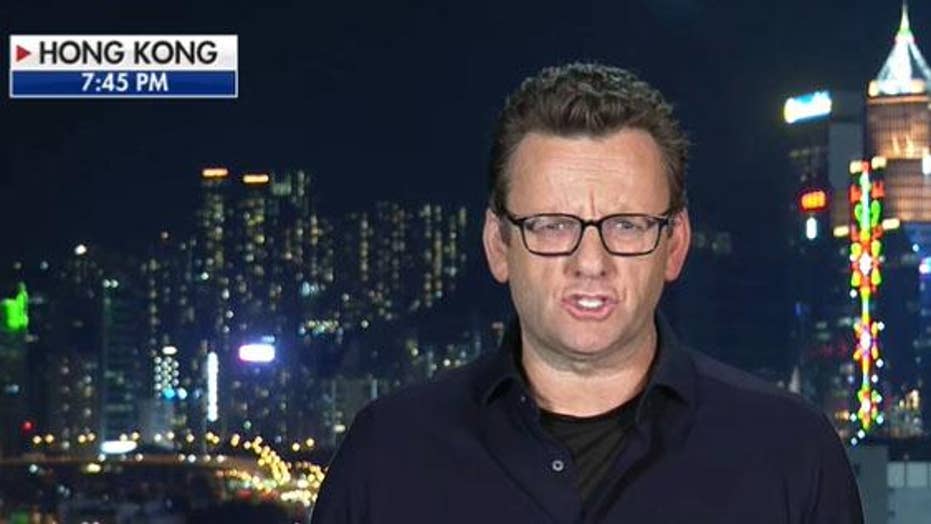 Jonathan Hunt reports on the long, violent and difficult week for Hong Kong and the first election since protests began

The House passed the measure 417-1 Wednesday, sending it to President Trump, who has not yet said if he will sign it as he works to reach a trade agreement with China.

“I stand with Hong Kong,” the president said Friday in an interview with “Fox & Friends.” “I stand with freedom. I stand with all of the things we want to do. But we’re also in the process of making the largest trade deal in history.”

Passage of the bill comes at a critical time in Hong Kong's history. The violent confrontations in Hong Kong between police and young protesters have gotten worse. In recent days, we saw images of the once-serene campus of Hong Kong Polytechnic University become a war zone lit by fires.

On the one side are police in full riot gear who are firing tear gas, rubber bullets and sometimes even live ammunition against protesters.

The power of such force overwhelmed protesters, who are fighting back with only bricks and bows and arrows. Many of them are teens or in their early 20s.

Police sealed all exits of the campus and trapped the protesters there. More than 1,000 students have been detained by the police. The images of fire, smoke and injured youth are reminiscent of what the world witnessed in Tiananmen Square in June 1989, when the Chinese government brutally cracked down on pro-democracy students.

It seems history is about to repeat itself in Hong Kong, once the freest place on earth.

Let's not forget that the protests started as a peaceful rejection of an extradition bill in April. Residents rightfully fear that should the extradition bill become law, Hong Kong would have to surrender anyone Beijing deems a "criminal," including human rights activists, political dissidents and any critics of the Communist Party.

Hong Kongers took their concerns to the streets, first in the hundreds, then in the thousands, then in the millions. In mid-June, the rest of the world witnessed 2 million Hong Kongers – more than a quarter of the city's population – walking down the streets of Hong Kong peacefully and demanding that authorities completely withdraw the proposed extradition bill.

Congress has sent a message to Hong Kong, to the rest of the world, and especially to the authoritarian regime in Beijing: the U.S. always stands at the forefront with those who fight for freedom.

People of all ages and occupations joined the protests. Hong Kong youth were the most impressive. They stayed behind to collect trash and sorted recyclables. After the massive protests, the world was impressed with the litter-free streets and zero property damage.

But Hong Kong authorities and Beijing refused to listen to the people's demands. Such refusal led to the violent confrontations between police and protesters we have seen since then.

The protests in Hong Kong have been going on for six months now. Instead of simply protesting the extradition bill, the protests have evolved into a pro-democracy movement seeking universal suffrage and an independent investigation into reported police brutality.

It seems that neither Hong Kong authorities nor the protesters are willing to back off at this point. Since the protesters are so outgunned by the police force, the continuing confrontation can only lead to a tragic outcome similar to what happened in Tiananmen Square in 1989.

Early this month a 22-year-old student died after falling from a parking structure near a protest site. The exact circumstances of his death are unclear, but his passing became a rallying cry for investigating police conduct.

Then last week a young man was gunned down by police. Incidents like these remind us that these young Hong Kong protesters are the future of this city. Leaders of the free world, especially in the U.S., have a moral obligation to protect them.

This is why the Hong Kong Human Rights and Democracy Act of 2019 is so critical at this time. The bill "addresses Hong Kong's status under U.S. law and imposes sanctions on those responsible for human rights violations in Hong Kong."

Even though Hong Kong is legally part of China, the city's unique status – including an independent judicial system and a free-market economy – has enabled it to enjoy special treatment from the U.S.

The legislation passed by Congress requests the State Department to "certify annually to Congress as to whether Hong Kong warrants its unique treatment under various treaties, agreements, and U.S. law. The analysis shall evaluate whether Hong Kong is upholding the rule of law and protecting rights enumerated in various documents."

In Rubio's words, by passing this bill "the United States Senate sent a clear message to Hong Kongers fighting for their long-cherished freedoms: we hear you, we continue to stand with you, and we will not stand idly by as Beijing undermines your autonomy."

Now Hong Kong authorities and Beijing will have to think twice before using deadly forces against Hong Kong protesters.

For more than six months, Hong Kongers have been waving American flags and singing American anthems. They want something we Americans sometimes take for granted – the freedom to choose.

Congress has sent a message to Hong Kong, to the rest of the world, and especially to the authoritarian regime in Beijing: the U.S. always stands at the forefront with those who fight for freedom.