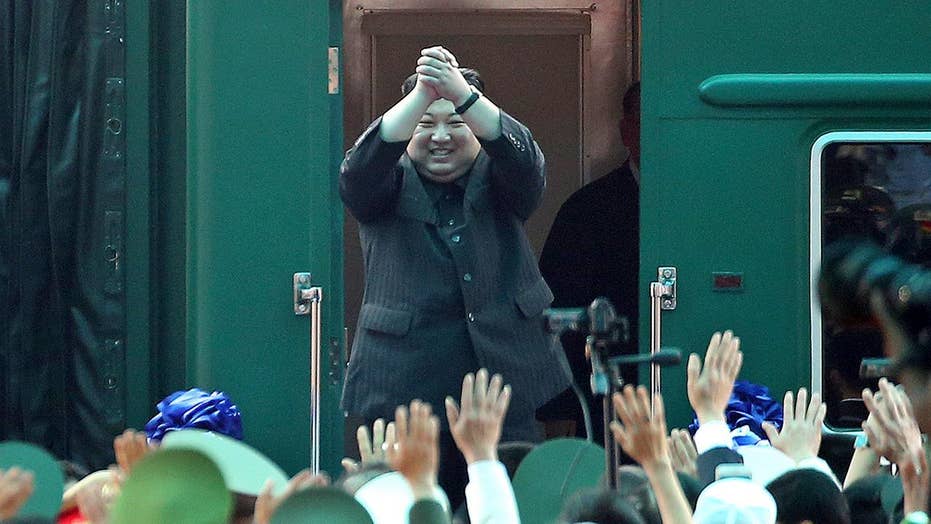 Kim Jong Un arrives in Russia for talks with Putin

The North Korean leader sets foot on Russian soil for the first time after traveling by train; Greg Palkot reports on the goals of the meeting.

North Korean leader Kim Jong Un and Russian President Vladimir Putin – whose nations are both hurting as a result of U.S. economic sanctions – will hold a summit Thursday in the Russian port city of Vladivostok that may strengthen their trade and cooperation.

I don’t expect dramatic developments to come out of the meeting, but it could be a significant step that allows the two countries to begin working more closely together for their mutual benefit and be in a better position to resist pressure from the Trump administration.

Kim is under far more pressure than Putin. The North Korean dictator faces severe U.S. and United Nations sanctions designed get him to give up his small arsenal of nuclear weapons and intercontinental ballistic missiles.

Since the failure of Kim’s February summit with President Trump in Vietnam, Kim is eager to find another country willing to help him evade U.N. economic sanctions that are crippling his economy.

At his summit with Trump, Kim sought relief from the most punishing sanctions in return for promising limited steps on a path toward eventual denuclearization of the North. But Trump wanted Kim to move forward rapidly to begin getting rid of all his nuclear weapons. Kim refused, leading the summit to end abruptly.

Putin is in a similar position to Kim in some respects. Moscow is also being subjected to U.S. economic sanctions, but not for nuclear weapons development. Instead, Russia’s invasion of Ukraine, seizure of Crimea from that country, and a whole host of other transgressions have led to American sanctions

Since the failure of Kim’s February summit with President Trump in Vietnam, Kim is eager to find another country willing to help him evade U.N. economic sanctions that are crippling his economy.

Putin wants to show the world – but mostly President Trump – that he also has options, or potential cards to play against Washington if U.S.-Russia relations get even worse.

Should we worry about improved Russian-North Korea relations?

Keep in mind, it was the old Soviet Union that gave North Korea its first pieces of nuclear technology in the 1960s that helped give birth to its atomic weapons. It was also Russian scientists in the early 1990s who helped give Pyongyang the technical know-how it needed to develop the powerful long-range missiles it is perfecting today.

Thankfully for Western civilization, there is little to fear from these two old allies coming closer together.

Russia is no longer the Soviet Union – and thank God for that. Putin’s Russia is an impoverished nation in decline, with an economy smaller than South Korea’s or Italy’s. Moscow does not have the economic muscle to help North Korea in a major way even if it wanted to.

Then there is the issue of granting North Korea what it wants most: sanctions relief. The most damaging sanctions come courtesy of multiple U.N. Security Council resolutions passed in 2016 and 2017 that have not only halted growth but caused North Korea’s economy to contract considerably.

Considering that it would take all five permanent U.N. Security Council members – including the U.S. – to vote for repeal of these sanctions, there will not be any sanctions relief coming any time soon.

While there is always the possibility that Russia would outright violate U.N. resolutions and break the sanctions regime altogether, Putin will likely conclude the consequences and likely pushback by the Trump administration would not be worth the risk.

But Putin might have another card up his sleeve. Imagine a situation in the future where U.S.-Russia relations are even worse than what they are now. Moscow would love to have a North Korea card in its pocket, ready to pull out at a moment’s notice.

Consider a situation, for example, where there is another incident over Ukraine or in the Baltics and America and Russia are at loggerheads. Russia would always have the option of raising the stakes by helping North Korea in some way.

Moscow, for example, could make it much harder for America to destroy Kim’s nuclear weapons by giving Pyongyang advanced air defense equipment like the S-400 or even newer S-500 that could potentially attack stealth aircraft.

While such ideas might be fiction now, history tells us the great powers of the world must consider every eventuality – something Putin seems to be good at.

North Korea also seems to be thinking about the future. Kim, in many respects, is trying to emulate the foreign policy of his grandfather who ruled North Korea, Kim Il Sung.

Grandpa Kim was good at playing off the great powers against one another. North Korea was at its strongest – and in fact, the envy of many communist nations – when it received large amounts of economic aid from both the Soviet Union and China as both nations competed for Pyongyang’s allegiance.

And while now there are no economic goodies or great power bidding wars for Kim’s love today, there may come a day when there is a deal over North Korea’s nuclear program and sanctions are lifted. At that point, nations the world over will want a piece of North Korea’s economic modernization.

This could mean trillions of dollars in North Korean minerals up for grabs and even potential offshore oil. There will, in many respects, be a race to North Korea, and Kim will be in a good position to take advantage of it.

Having friendly ties with Russia now could come in very handy later for Kim.

So it would seem both Putin and Kim will have a lot to smile about when they pose for photos at their summit. Each could see a potential partner in the future, even if for now there is not much one can offer the other. And, at least for now, both seem to be happy with such an arrangement.